Governors team up against Rubio 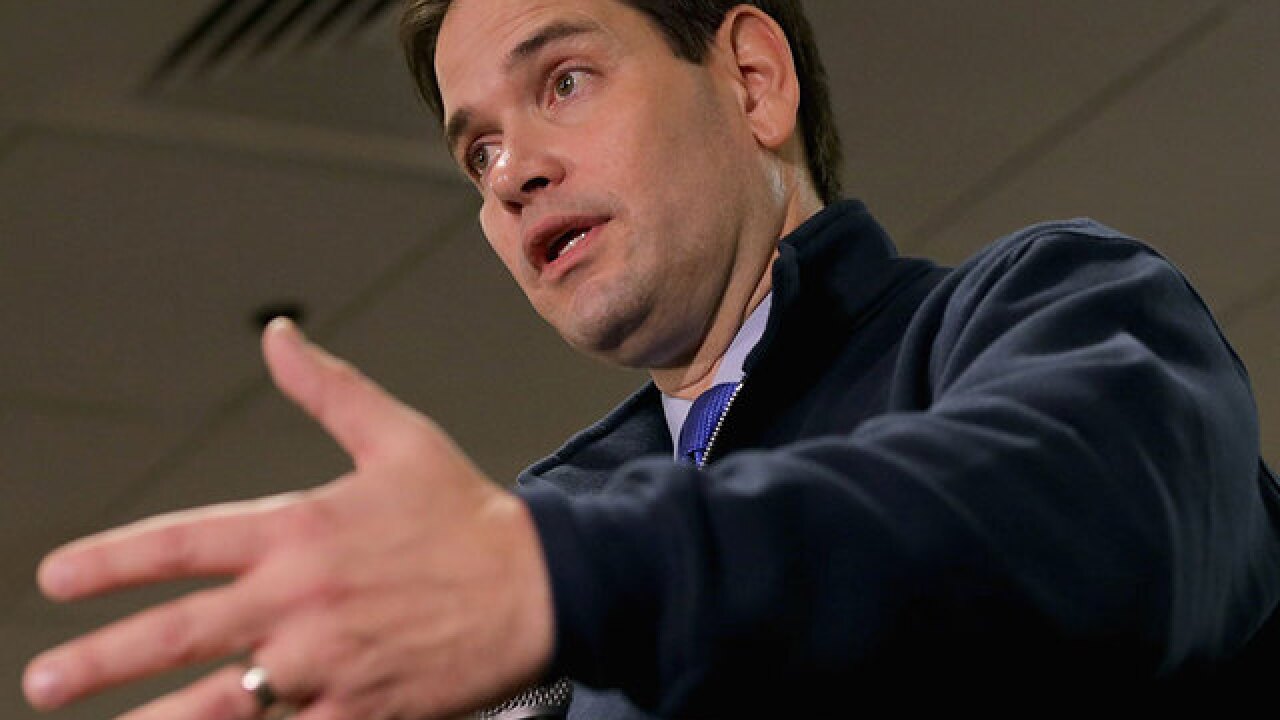 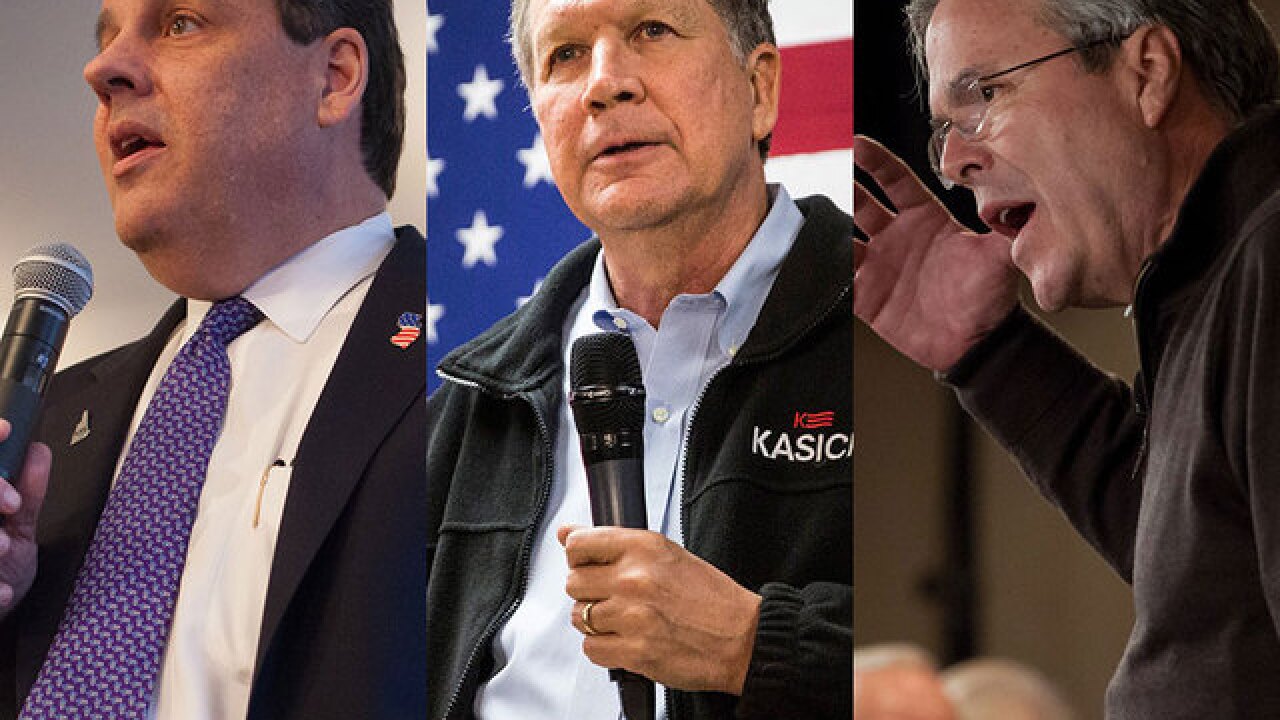 In the competition for the White House, sometimes the best strategic play might be breaking into teams. In the days leading up to the second 2016 test —Tuesday’s primary in New Hampshire — some Republican hopefuls are aiming for victory by making it a game of governors vs. senator.

New Jersey Gov. Chris Christie went on an all-out offensive Thursday. On MSNBC’s Morning Joe he called out Rubio for having “drive by” town halls and questioned whether he had any real accomplishments in the Senate. Christie also compared Rubio to President Obama, saying, “Barack Obama had no experience and this is what we’ve turned up with.”

Christie’s critique of Rubio didn’t just stop at his supposed lack of experience as a freshman senator, but also pushed at a deeper critique—that senators in general are not as fit as governors to be president because they lack executive experience.

During an interview on  Good Morning America,  Christie said, “We need to make sure we nominate someone who not only can beat Hillary Clinton but also can manage the government and get it back on the right track once they’re elected president of the United States.”

He continued, “No need to take those chances on someone who’s never managed anything larger than a 30-person Senate staff.”

Rubio is currently in a strong second place spot in New Hampshire, according to a  poll  conducted by the University of New Hampshire for CNN and WMUR that was released Wednesday night. It showed that Rubio, now at 18 percent, got a seven-point bounce following his third-place finish in Iowa.

The three governors vying for the Republican presidential nomination have a lot of ground to make up if they hope to seriously challenge Rubio. The same poll plotted Ohio Gov. John Kasich, former Florida Gov. Jeb Bush and Christie at 12, 10 and 4 percent respectively. Donald Trump still leads the pack with an unchanged 29 percent support.

At a town hall event at New England College in Henniker, N.H., Thursday evening, Christie continued his attacks on Rubio, telling the crowd, “You can like Marco Rubio, he’s a perfectly nice guy, but you don’t just run for president because you see a political opportunity.”

Known for his bombastic style, a direct representation of his campaign slogan “Telling it like it is,” Christie once again pointed out how a Rubio presidency could turn out like Barack Obama’s—who also ran as a first term senator.

“Marco is a talented politician, he got elected when he was 26-years-old, people love him and I do, too. He’s a great guy. But he’s not a leader,” Bush added.

Bush’s Super PAC, Right to Rise, has released ads criticizing Rubio for being too pro-life on abortion and too liberal on immigration. His team also paid for a  full-page ad  in the New Hampshire Union Leader Wednesday that said, “While Senator Rubio is a tremendous political talent, he is not the best choice to serve as Commander-in-Chief.”

“Take it from the people who know Marco and Jeb best. Governor Bush is the leader we need to make America safe, stronger, and freer,” the ad read.

Teamwork behind the scenes

According to the  New York Times , an alliance of sorts also has grown between Christie’s and Bush’s campaigns. Staffers on both teams talk behind the scenes about a mutual interest in attacking Rubio, at times exchanging key articles and wishing each other luck, the Times reported. Christie refuted those claims on Fox and Friends late Thursday.

Kasich, who is faring the best in the polls among the governors and has spent a significant portion of his campaigning thus far in New Hampshire — his one hundredth rally is scheduled for Friday — has refrained from direct attacks on Rubio, vowing for a positive campaign much like that of Democratic candidate Bernie Sanders.

However, the Super PAC supporting Kasich made it clear who it considered his biggest competitor when it released a 30-second  attack ad Monday  that targeted Rubio’s vote against the reauthorization of the Violence Against Women Act.

Later Kasich strategist John Weaver called on the outside group to pull the ad through a series of tweets and it was later replaced.

However, the barrage of attacks didn’t appear to faze Rubio on Wednesday as he made his way around the Granite State.

In a following Q and A with press, when asked about some of the comments made about him and his record, Rubio said, “Look, when people are having a tough time in a campaign, especially near the end, you see some desperation set in and so they’ll start saying things. But I’m not too worried about that.”

While the teaming up of the governors may help them in a united front against the likely No. 2 finisher in the state, it apparently isn’t helping voters distinguish between them.

Christie has made it a point to say he’d like to finish ahead of the other governors — but all of his attacks this week have so far focused on the Florida senator.

To New Hampshire voters trying to make the decision between the three governors, Christie’s attacks on Rubio come a bit out of left field.

“You know, I was surprised that Rubio was the only one that he mentioned,” said Jennifer Page, a 47-year-old pediatrician from Merrimak, N.H. “Rubio came in third in Iowa, and Iowa and New Hampshire are very different, but he didn’t even mention the two other winners.”

Page said she came to the Chris Christie rally in Henniker to narrow down her choices. She had just come from a Rubio rally at St. Anselm College earlier that day and planned to see John Kasich talk in Derry on Monday.

She said she liked the two governors because they were closest to her fiscally conservative and socially liberal identity. Following the rally, she was close to crossing off Rubio thanks to Christie’s comments on Marco’s lack of experience as a senator.

“I think that he made excellent points, he did it in a humorous way comparing him to a grade school student,” she said. “But it’s true that the senators have never been the one sitting there … saying ‘TA-DA our state is a disaster, and what should we do?’”

Like a true New Hampshirite though, she said she wouldn’t make her final decision until the last minute.

“Let’s see how Kasich does,” she said.