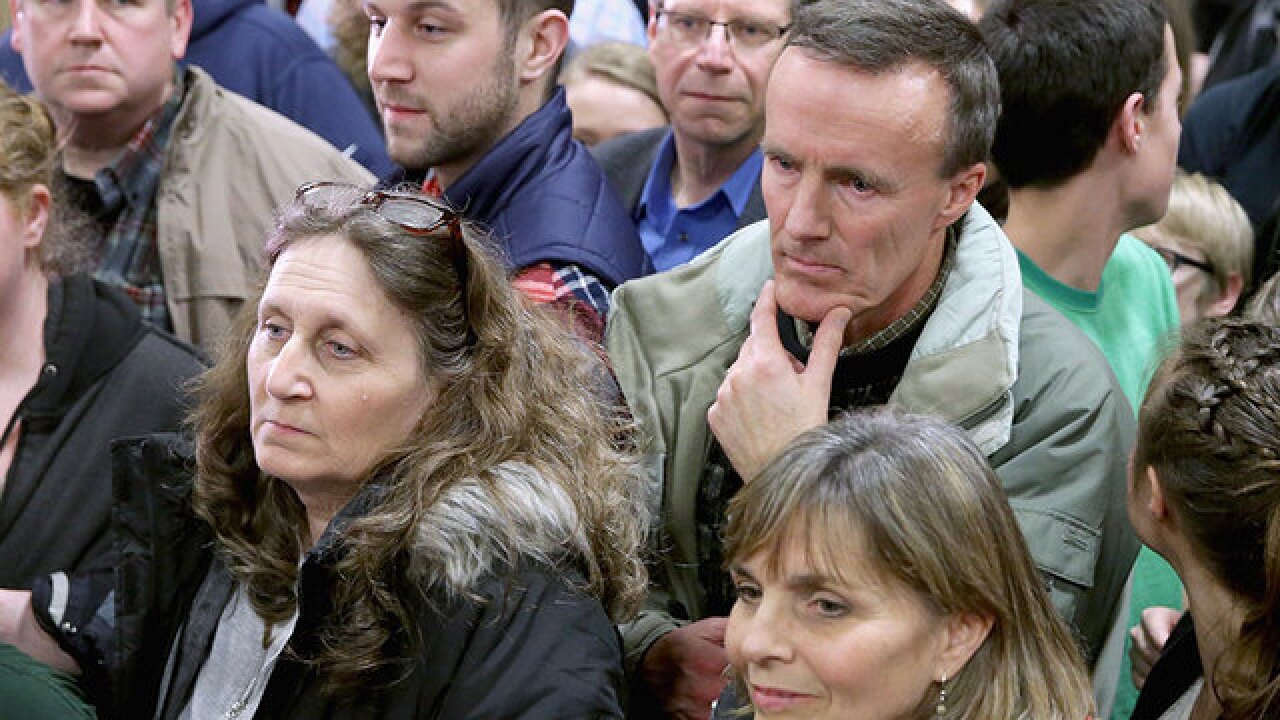 <p>People wait in line to meet Republican presidential candidate Sen. Marco Rubio, R-Fla., and have their photograph taken with him at the conclusion of a campaign rally in the Hood Middle School gymnasium Feb. 5, 2016 in Derry, N.H. (Photo by Chip Somodevilla/Getty Images)</p>

Sitting with a crowd of eager New Hampshirites on Friday evening in a conference center 10 miles southwest of Manchester, Mel Spierer and his wife Rachel are waiting to see Gov. John Kasich speak and take questions for their third time. They have driven out of their way to see Kasich and the other candidates on dark, icy roads on multiple occasions.

“It’s very important for the rest of the country to not downplay what this is,” Mel told me while waiting for the governor to be introduced by former Patriots player Mike Vrabel, a special gimmick for Kasich’s 100th town hall in the state. “Probably everybody here has seen a number of candidates. Everyone here takes it very, very seriously, and devotes a lot of time to it. We’ve read a lot on it. It’s our responsibility.”

While the majority of Americans will likely be focusing on the Super Bowl this weekend, in the Granite State New Hampshirites are focused on a game of another sort. The presidential primaries typically pull in dismal voting numbers nationally, but for residents in the state that holds the first primary, this time of year is their moment of glory.

“The fact that we live here in New Hampshire and we can be part of this process is exciting,” said Marie Russell, a 51-year-old kindergarten schoolteacher who lives in Bedford. “But it’s also overwhelming because I’m totally exhausted at this stage.”

Russell is an Irish citizen and is quick to mention that she doesn’t have the ability to cast a vote — but her 12-year-old daughter Roisi eventually will.

“We went to Chris Christie, we’ve been to Bernie Sanders, tomorrow we have Chris Christie and Jeb here at the same time, and then the next morning we have Marco Rubio in our school system where I work,” Russell said. “We’re trying to see them all because one of them will be the next president and I want my daughter to see it, too. It’s exciting.”

A sense of duty

There’s a saying in New Hampshire: You have to see a candidate three times in order to vote for them—and for most of the people I talked to in the week leading up to Tuesday’s primary, that seemed to not just be a adage, but a duty.

For Jennifer Page, a 47-year-old pediatrician from Merrimack, the unique ability to attend living-room sized rallies and talk face to face with presidential hopefuls gives the average citizen the ability of holding them accountable — even when it means being a little rude.

At an early evening town hall with Chris Christie at New England College, Page stood at the microphone and asked the governor how he could distinguish himself from the other more moderate leaning Republican candidates. She also told him she had placed him firmly in her top three.

After telling him who those three were—Florida Senator Marco Rubio, whom she had seen earlier in the day, and Gov. Kasich, whom she planned to see later that week—Christie responded jokingly, “Oh, that Kasich town hall? I think he told me he’s cancelling it.”

It was clear this was not the first time the governor had had voters be so direct with him. It is not unusual for him to get questions in his sometimes hour-long Q and A’s that range from national security policy to his take on helping police officers suffering with mental issues.

Many, like Page, believe answering these at times ultra-specific questions is the candidate’s job.

One family I talked to at a Marco Rubio rally at St. Anselm College said attending the town halls was part of their daughters’ home school experience.

In fact it’s not only citizens of New Hampshire who try to take advantage of the deluge of candidate attention paid to the state this time of year. Many people attending the town halls traveled sometimes long distances to reap the benefits of seeing a presidential hopeful up-close and personal.

In other words, New Hampshire is experiencing primary tourism season.

Sheryl Kelley and her husband Ron, both 69, drove up to New Hampshire from Virginia a week before the primary to try to get in a meet-and-greet with every candidate making rounds in the state.

For Xavier Thomas, 67, who drove up from Massachusetts for an afternoon with Marco Rubio, it was only one of the many stops he had made so far this season in the Granite State.

“Well I hadn’t seen Rubio yet, he’s kind of intriguing. I’ve seen Trump, Fiorina, Christie and I like what I hear,” he said. “Rubio had no script, no teleprompter. It’s in his heart, he knows what he wants to say.”

Ryan Miner, 30, came up to New Hampshire from Maryland with a group of friends to volunteer of Rand Paul. When Paul dropped out of the race early in the week, they decided to take advantage of being in such a politically saturated state.

“We’re politicos, we love politics. New Hampshire is where politics is. It’s where you get access to the candidates and to be honest with you, we wouldn’t have the same access to John Kasich or even Donald Trump in the state of Maryland,” he said. “It would be a very structured event. Where as [here] you show up, you get to ask them a question, you get to meet the candidate, take a picture and then you get to go home and decide whether this candidate meets your values.”

While Miner said Paul’s dropping out left him with no back-up candidate, he said he’s hopeful that New Hampshire will help him narrow the list through what he termed “a version of speed dating.”