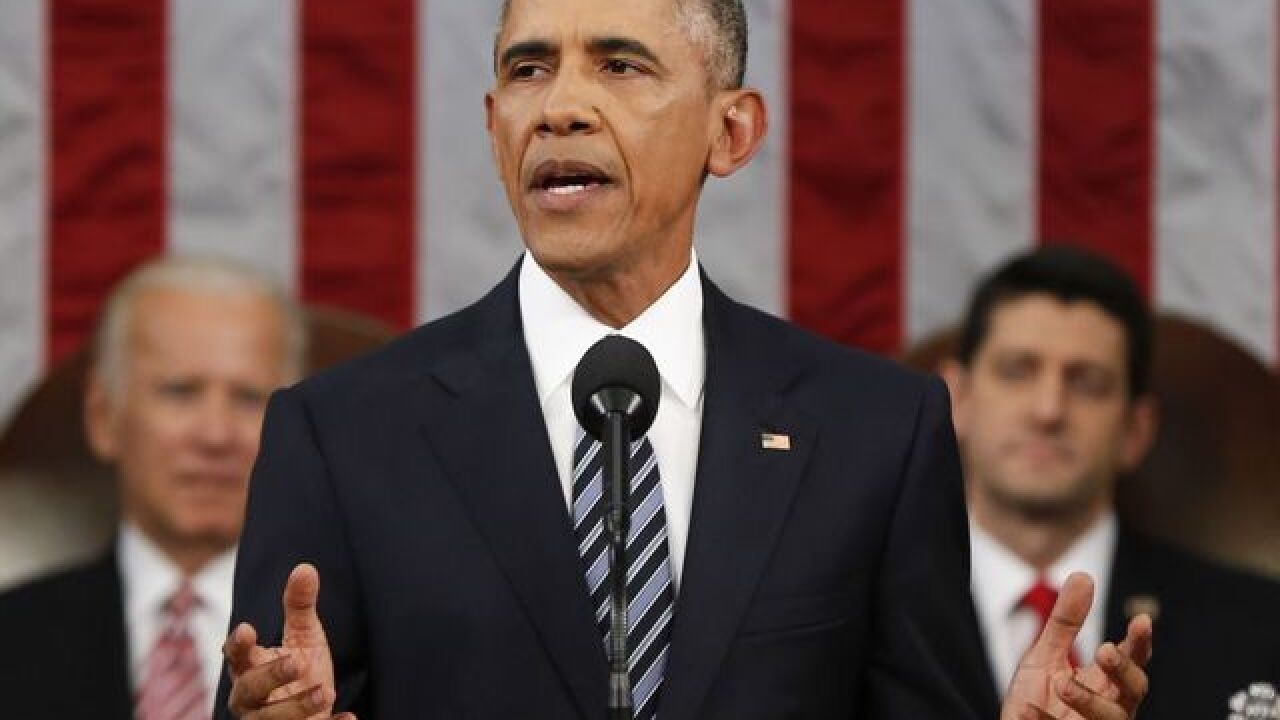 America’s first black president delivered his final State of the Union address on Tuesday night after two steady terms in the White House. A milestone that seemed unimaginable only a decade ago is about to melt into the history books. By standard measures, his has been a successful presidency: The economy is in far better shape than it was eight years ago; far fewer American soldiers are fighting wars; far more Americans have health insurance and jobs. But triumph wasn’t in the air.

It will be left to historian’s to figure out why this wasn’t a moment for more civic pride and appreciation.

President Barack Obama on Tuesday night spoke to a Congress and an electorate disinclined toward generosity, gratitude or a long view of politics. Undaunted, the president scrapped the laundry list formula of State of the Union speeches. Instead, he swung for the fence. His speech was a crisp, blunt, tightly argued and eloquent statement of principles to guide America’s political future.

As oratory and manifesto, I am scoring it as a home run. Perhaps the speech will be savored and quoted some day. For now, it is but another bit of political ephemera, a one-cycle story, an old ritual encased in the plastic wrap of politics and not as entertaining as the Republican presidential campaign.

There’s nothing unusual about that.

On Jan. 25, 1988, Ronald Reagan presided over the last State of Union of his two terms, something that had not happened since 1960. The presidencies of the 1960s and 1970s were short and volatile. Reagan broke that cycle. Still, his final address in the House wasn’t a grand event and isn’t a well-remembered speech.

As admired as Reagan is in memory, he was no more popular than Obama going into his final year; both had job approval ratings hovering below 50 percent.

President Reagan’s speech was practical, not visionary. “If anyone expects just a proud recitation of the accomplishments of my administration, I say let’s leave that to history; we’re not finished yet,” he opened. “So, my message to you tonight is put on your work shoes; we’re still on the job.” His speech lasted only 44 minutes.

Still, Reagan set the table well enough to be succeeded in office by his own vice president, George H.W. Bush, though for only one term. And today, many Democrats, liberals and independents that disliked Reagan back then, now appreciate that he did boost the national mood and confidence. Most everyone agrees he would be too liberal for today’s GOP.

Since then we have had three more two-term presidents and perpetually divided government.

Bill Clinton was next to reach the two-term finish line. Clinton began his last lap far more popular than Reagan or Obama. Despite the Lewinsky scandals (or perhaps because of them), President Clinton’s approval numbers topped 60 percent at the start of his last year.

Clinton gloated and preached in his last State of the Union address. He did offer a recitation of his accomplishments – and of most everything that was on his mind. The 9,300-word speech went on for one hour and thirty-five unmemorable minutes. And like Reagan, Clinton had paved the way for his vice president to succeed him. Al Gore won the popular vote but not the office in one of American history’s great flukes.

Of the four post-Nixon two-term presidents, George W. Bush gave his last State of the Union address under the most duress. With the economy careening toward panic and the Great Recession, and chaotic wars in the Middle East still hot, Bush’s approval ratings were at historic lows. He took only 53 minutes to give the most generic kind of address, a laundry list of pending business.

I have little doubt that Obama’s place in history will follow the Reagan path. He will be far more respected and appreciated by history than by the tracking polls and punditry of today.

Indeed, unless something big changes in American politics that markedly diminishes the toxic partisanship, constant campaigning, media theater that has forged massive public distrust of all government institutions and leaders, Obama’s administration may be the most successful we see for a while.

Obama issued a similar warning in his address, and a gutsy mea culpa.

“It’s one of the few regrets of my presidency – that the rancor and suspicion between the parties has gotten worse instead of better,” he said. “There’s no doubt a president with the gifts of Lincoln or Roosevelt might have better bridged the divide, and I guarantee I’ll keep trying to be better so long as I hold this office.”

There is no mystery about where President Obama’s presidency failed to realize its own important and specific ambitions: immigration reform, gun control, closing the Guantanamo Bay prison, getting more U.S. troops out of wars and increasing the minimum wage and safety net for the poor.

Reading between the lines of recent speeches on terrorism – and according to some anonymous White House sources, it seems Obama also wishes he had more success easing public fear of foreign terrorism, fear he believes is irrationally exaggerated. It is certainly stoked by demagogic politicians in this campaign.

He addressed that Tuesday night. “Masses of fighters on the back of pickup trucks and twisted souls plotting in apartments or garages pose an enormous danger to civilians and must be stopped. But they do not threaten our national existence,” he said. I suspect the GOP attack ads are already in production.

One persistent policy complaint from the Democratic left is that Obama didn’t go full throttle on economic inequality, in rhetoric or policy. First Elizabeth Warren and now Bernie Sanders have carried this torch with substantial support in the party.

In his speech, Obama warned that only deep political reforms can address growing economic and thus political inequality.

“Those with money and power will gain greater control over the decisions that could send a young soldier to war, or allow another economic disaster, or roll back the equal rights and voting rights that generations of Americans have fought, even died, to secure,” he said. “As frustration grows, there will be voices urging us to fall back into tribes, to scapegoat fellow citizens who don’t look like us, or pray like us, or vote like we do, or share the same background.”

Watch the next Republican debate and see if you think he has a point.

Washington’s polarized, obnoxious behavior is getting more extreme, as this campaign proves. But it has framed party competition since Newt Gingrich’s speakership and Clinton’s impeachment fight. The deregulation of campaign spending and proliferation of ideological media and social media have acted like steroids for polarization and bile. Those are facts of life for every pol and president.

But President Obama has had to confront an invisible enemy no prior president faced: racism.

Just how much racism effected Obama’s ability to govern is one more question for history. He has weathered unceasing and unprecedented personal vilification from a cadre of true haters, people who somehow believe their president is a Muslim or Kenyan.

Yet race has been the great elephant in the rooms of the Sunday talk shows, cable panels and editorial pages for the past eight years. It is uncomfortable and risky to discuss racism in politics. Obama and his family have handled the burden – and the threats — with understated dignity and unflappable discipline; they’ve received precious little gratitude in return. Obama broke a huge historical barrier and history is bound to be more generous than the present.

A lame duck address from the House floor can’t do much to telegraph history or even guide an agenda in Congress. The administration worked especially hard on its pre-speech spin this year, sensibly insisting the president’s speech was for the record, not the news cycle. They hope it can stand out as a moment of reflection and good faith outside the circus tent of one of our weirdest nomination campaigns.

But more important, Obama’s final report on the State of the Union was profound, honest and interesting – even for those who disagree on big issues. But it was the sort of speech that is difficult for the political “argutainment” buzz machine to digest. It is the best rationale for a Democratic presidential campaign I have yet seen. And it was way shorter than Bill Clinton’s.

To listen to DecodeDC podcasts and read other blog posts about politics, politicians and policy, go to DecodeDC.com. And don't miss a new spin-off podcast titled, TrailMix 2016.