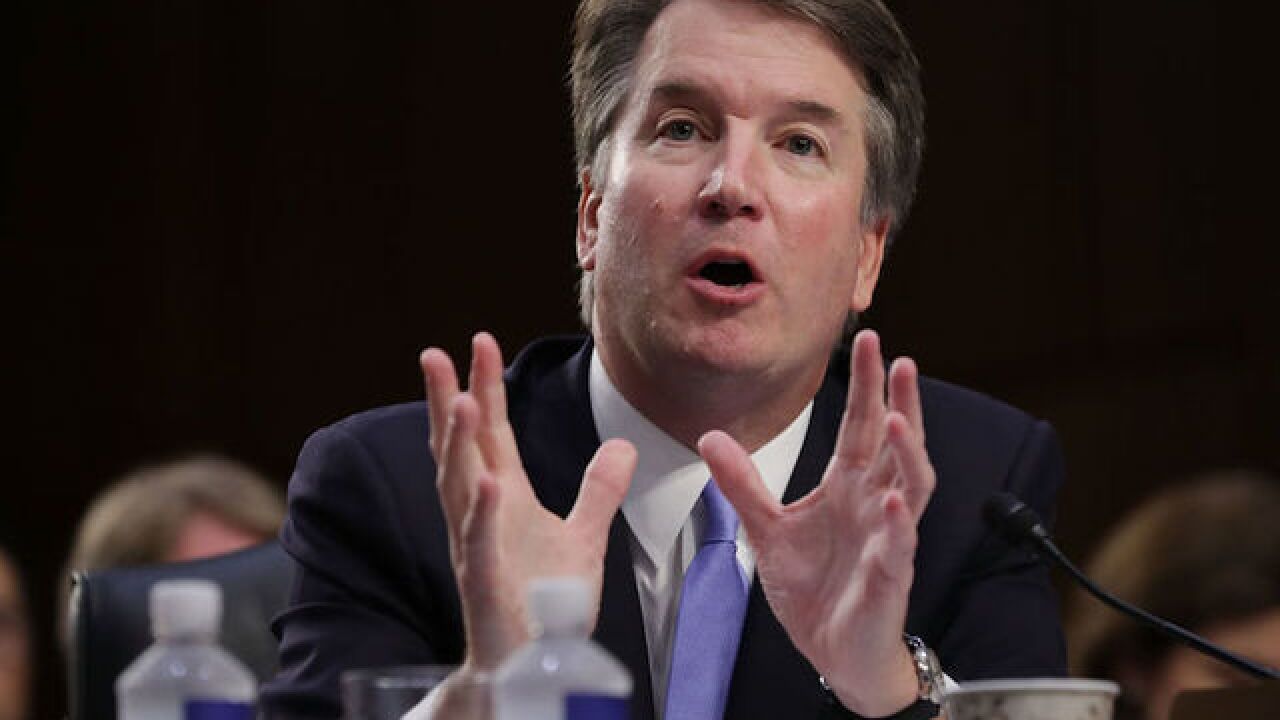 Two of the day's big news stories collided Monday night on the red carpet at the Emmy Awards, where one attendee debuted a "Stop Kavanaugh" message written on her arm, referring to the nomination of Brett Kavanaugh to the Supreme Court and the sexual assault allegation he is now facing.

Sarah Sophie Flicker, the wife of "GLOW" director Jesse Peretz, whose TV show was nominated for several EMMY awards, was dressed to impress in a bright red dress with matching hair accessories. The "Stop Kavanaugh" message on her right arm, however, became the most talked-about accessory of the evening.

Flicker also wrote the US Capitol switchboard number on her arm and displayed the message to the cameras as she walked along the red carpet entering the awards ceremony.

#Emmys GLOW director Jesse Peretz and his wife Sarah who has quite the arm accessory this year. pic.twitter.com/BSDPyjvTCa

In photos posted to her Instagram account before the event, Flicker encouraged people via the captions to call their representatives in Congress to express their opinion on Kavanaugh.

"Emmys ready. •Number is right there and here: (202) 224-3121‬ • Say something like this: For the Senate Judiciary Committee to move forward with a vote to confirm Brett Kavanaugh this week, without pausing for a thorough investigation of the allegations of sexual violence, would be a gross injustice and an insult to women. Stop the vote," Flicker wrote in one caption.

Flicker has been an outspoken activist in recent years and also serves as an organizer of the Women's March. Her Instagram feed showcases photos of her supporting progressive candidates such as Cynthia Nixon, screenshots of tweets promoting feminism and many images about Kavanaugh throughout his nomination process. In the captions of these images, Flicker urges her followers to protest his nomination and make their opposition known to their members of Congress.

The Emmys occurred the same day that both Kavanaugh and his accuser Christine Blasey Ford agreed to testify before the Senate Judiciary Committee next week.

Ford alleges that during a party in their high school years, Kavanaugh pushed her into a bedroom, tried to remove her clothes and put his hand over her mouth when she tried to scream. Kavanaugh said in a statement that he "unequivocally" denies the allegation.

Kavanaugh spent more than nine hours Monday huddled behind closed doors at the White House with his confirmation team. The political stakes for the White House and members of Congress are enormous as the #MeToo movement galvanizes women ahead of key congressional elections in November.