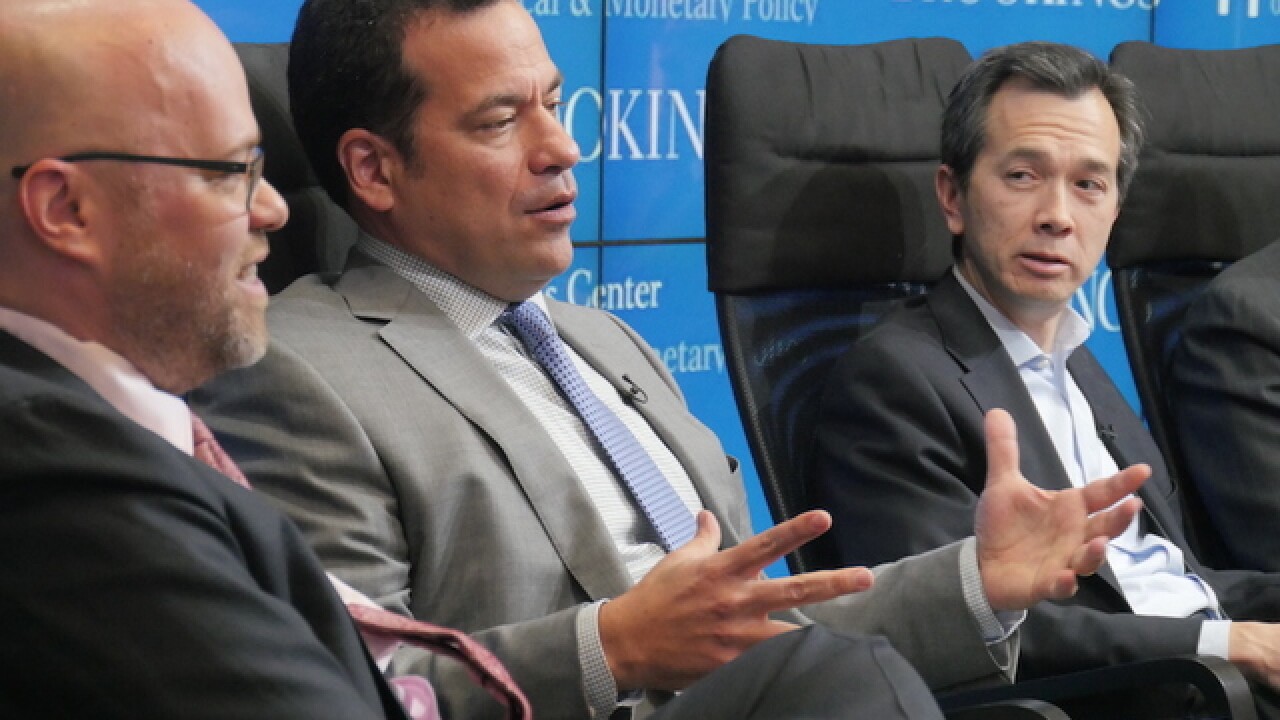 SHFWire photo by Karina Meier
<p>Trader Danny Moses, middle, talks about a character who was based on him in “The Big Short” as journalists Adam Davidson, left, and Greg Ip look on. Moses said the movie was an accurate portrayal of what he experienced during the crisis. </p>

Adam McKay said that when he released his movie “The Big Short,” he hoped it would start a conversation about the financial crisis of 2008.

But recently, the film has been part of another conversation: the race for Best Picture at the Academy Awards.

The film received the top prize from the Producers Guild of America last week. Forget the Golden Globes — the Producers Guild has chosen the eventual Academy Award winner the last eight years. “The Big Short” — previously considered an outsider by industry reporters — is now thought to be neck-and-neck with “The Revenant” and “Spotlight” for Best Picture.

McKay, who directed the movie, took part in a panel discussion at the Brookings Institution Wednesday after the film was screened. A brief mention of the Oscars by David Wessel, director of the Hutchins Center on Fiscal and Monetary Policy at Brookings and the panel moderator, was met with enthusiastic applause from the audience. But most of the conversation that night was on the one McKay had intended when he released the film.

The financial crisis was an obsession of his, McKay said, and as soon as he read Michael Lewis’ book he was determined to bring “The Big Short” to the big screen.

“I would sit in my office with Adam and just ask him questions about the crisis,” McKay said, referring to journalist Adam Davidson who was also speaker on Wednesday. “The final goal was that I would be able to tell my 10-year-old daughter exactly what happened.”

The main topic of discussion for the panel was whether the movie had dumbed it down too much.

“It’s like asking, would doing a movie on the assassination of the Archduke Franz Ferdinand be the right way to tell the story of the First World War,” said Greg Ip, the chief economics commentator for the Wall Street Journal. “When you have something that’s as colossal and large and destructive as the global financial crisis, I don’t think you can really come up with a single movie that does the entire thing justice.”

Some speakers on the panel took issue with the movie’s ending, which claimed that nothing had changed since the financial crisis.

“We’ve done a lot of good stuff in banking since then,” said Donald Kohn, an economist who spent 40 years working for the Federal Reserve System. “But I do worry about people who want to repeal Dodd-Frank.”

The Dodd-Frank Act was the Obama administration’s attempt to strengthen regulations in finance and banking. As they did for the movie, the speakers praised the regulations while noting problems the law has caused.

One such issue, Kohn said, is that the regulations require the banks to hold more capital, which provides protection against risk. But the amount of capital required is so large that it has led to fewer new banks, and less competition among the “big boys.”

McKay was less confident about the regulations.

“When we would talk to people in the industry, they would laugh about the SEC,” he said, referring to the supposed enforcer of financial regulations, the U.S. Securities and Exchange Commission. “I in no way trust our government.”

Despite their criticisms of the ending, the speakers expressed their disappointment that only one man was sent to jail for the financial crisis, when many people had broken the law.

“If Wall Street finds a product they love … when they see it making money, they’ll try to get as much money out of it as they can,” Moses said.

McKay saw this endless appetite for money as a main theme for his film.

“I think that’s what this movie is really about,” he said. “Wealth at what cost?”