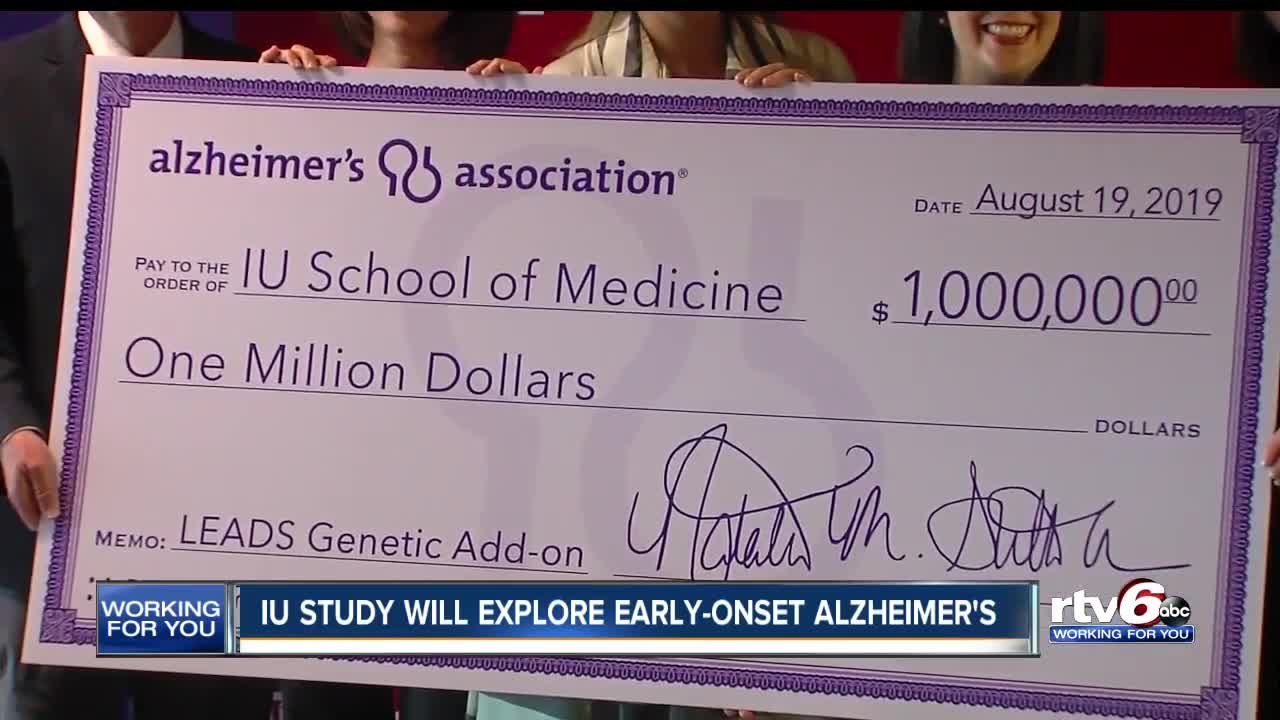 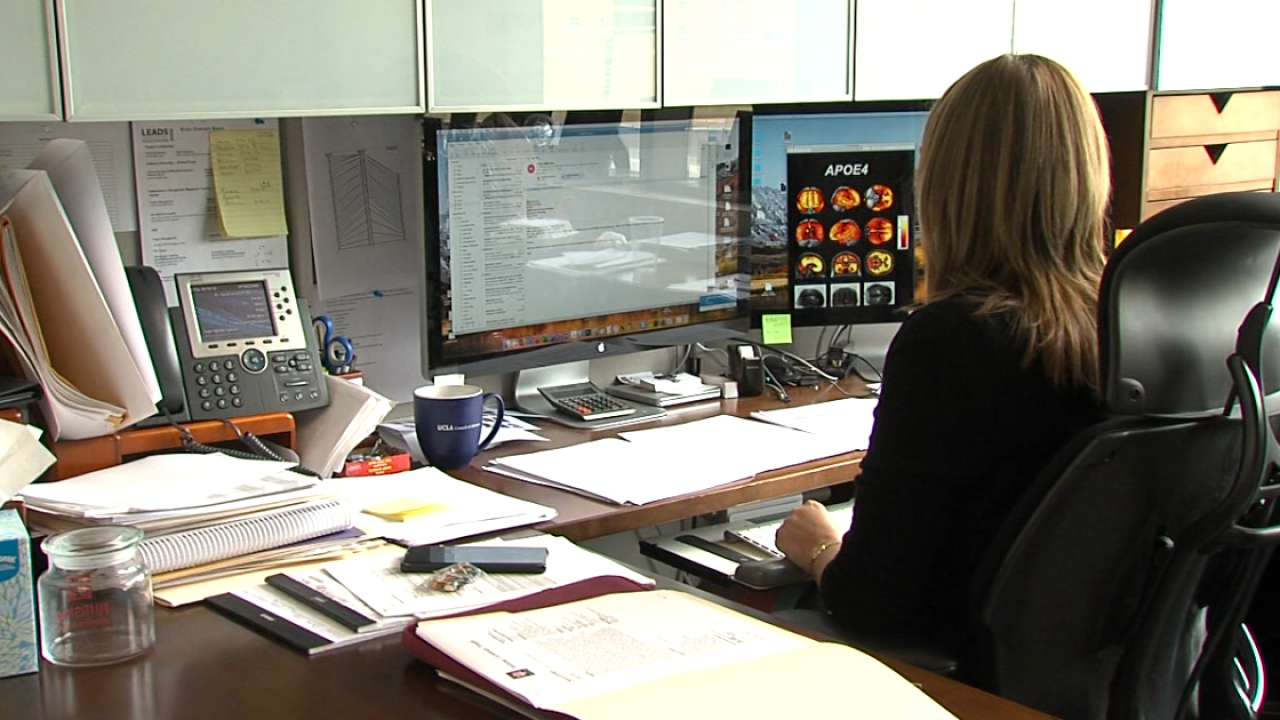 INDIANAPOLIS — Alzheimer's impacts thousand of Hoosiers and medical professionals still do not know exactly how it develops, especially in the younger-onset form of the disease. New grant money to fund a study at Indiana University School of Medicine has the potential to have an impact on many families affected by the disease.

It is a disease that hits millions of people and greatly impacts the families of those who love them. No matter when it is diagnosed, Alzheimer's Disease is fatal. Of the top ten causes of death in American adults, it is the only one that cannot be prevented, slowed, or cured.

With so much more to learn about the disease, there is hope in research that could be the key to find the answers so many families are desperate for.

One of the many Hoosiers diagnosed with Alzheimer's, a woman who thrived on her independence and love for her child, has now swapped roles with her daughter, at only 67 years old.

"She definitely remembers and loves her daughter Emily, but it's touch and go whether she recognizes me as Emily and it can even be in the course of a visit," says 34-year-old Emily Wilson. "It's difficult, she was a single parent, and we have an incredibly close bond. am making all of the decisions for her care, and she has become much more childlike as the disease has progressed and so it is hard."

Wilson is one of millions of daughters and sons who are now taking charge of their parents' care due to Alzheimer's Disease.

"My mom is in a facility," says Wilson. "She is a wanderer, she is not able to be on her own, and it wasn't an option for us to have her live with us. She really needs to be safe."

Wilson's mother, Sandra, was formally diagnosed with Alzheimer's two years ago, but at that point, doctors believe she had been living with the disease for nearly a decade.

"She was very intelligent and was able to mask it for a long time," explains Wilson. "So looking back I see a lot of warning signs that we were able to just explain away at the time. Nobody thinks this is what is affecting their family, but eventually, it progressed to the point that we couldn't ignore it anymore."

Dr. Liana Apostolova is a professor of Alzheimer's Disease Research at Indiana University School of Medicine. She is also leading a study into early-onset Alzheimer's, that is when the disease starts to affect people in their 40's and 50's. That study is the Longitudinal Early-Onset Disease Study, also known as LEADS.

A $1million funding gift to LEADS from the Alzheimer's Association Greater Indiana Chapter, Dr. Apostolova and her team can now dig deeper to understand the role of genes in the development and regression of the disease.

Learn more about LEADS at IU School of Medicine:

Learn more about LEADS at IU School of Medicine

"Instead of studying only the two percent of the genome, we are going to study it all," says Dr. Apostolova. "And the new genetic risk factors for this devastating form of Alzheimer's."

The money will focus on the genetics aspect and will help researchers study the entire genome of all 600 study participant to understand better the role a person's genes play in the development of early-onset Alzheimer's. Alzheimer's Disease is considered early-onset if it affects a person below the age of 65. All of the genetic analysis from this funding will take place at the IU School of Medicine.

There are at least 5.6 million people just in the United States living with Alzheimer's, and 200,000 of those experienced early-onset.

"The impact on families is enormous," says Dr. Apostolova. "It is a rare variant and one that is the most devastating. Obviously, those people are working, raising children, not ready to retire. The impact on the families is huge, on society as a whole as well, because we lose people that are in the workforce."

Those with early-onset Alzheimer's have not yet experienced changes in the brain associated with normal aging; this study can lead to breakthroughs for all forms of dementia.

"Once we get the diagnosis established, we can educate the family and the patient about what is coming, and knowledge is power," states Dr. Apostolova. "I explain to them that as the disease progresses, symptoms will evolve, memory will continue to decline, patients might start getting lost, need more supervision, need more oversight. It is important for them to prepare for that. What I also tell them is that they should not despair. Because a lot of research is happening and focusing on Alzheimer's Disease and finding the cure."

Dr. Apostolova wants families to know that even though there is no cure yet for Alzheimer's, medication can help with the symptoms. She recommends that families get legal help to make sure their loved one's affairs are in order as the disease progresses and she says the Alzheimer's Association can offer support and assistance as well.

What happens when someone is diagnosed with Alzheimer's Disease:

What happens when someone is diagnosed with Alzheimer's Disease:

It is reason enough to continue to have hope for all of those whose families have been dramatically changed because of this diagnosis.

"I am one of those people where research is probably not going to come soon enough to help my mom, and I have come to terms with that, but it is a devastating disease, and it is something that is affecting such a vast portion of our population," says Wilson. "The more research that we have, the better we can understand the brain, the greater chance that we can find a cure."

The $1 million from the Greater Indiana Chapter of the Alzheimer's Association is the first research gift, and the most significant research gift that they have given and all of the resources are going to be spent here in Indianapolis. While DNA is being collected from research participants across the United States, the analysis and all of the research findings and reporting will come out of Indiana University.

Click here for more information on LEADS at IU School of Medicine.