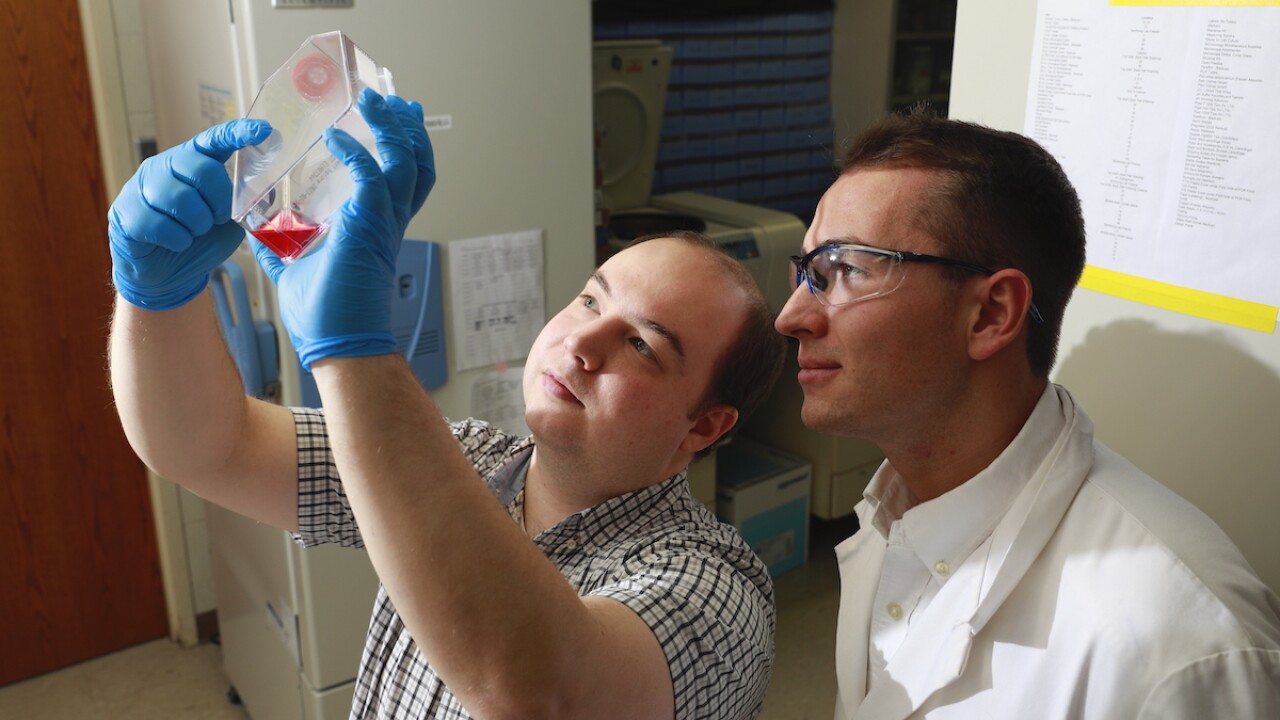 Butler University professor Chris Stobart in his lab January 27, 2020. <i>Biology Professor Stobart’s lab has focused on a protease in the deadly virus that could inhibit its replication.</i><br/>

INDIANAPOLIS — A team of researchers at Butler University are working to help find a potential virus vaccine and drug development for the deadly coronavirus.

On Thursday, the World Health Organization (WHO) declared a public health emergency as the virus continues to spread globally with at least six confirmed cases in the United States, including two in Illinois.

According to Butler University, the research team, led by Assistant Professor of Biology Chris Stobart, is focused on a protease named nonstructural protein 5 — an enzyme that cuts larger viral proteins into smaller proteins.

"Backed by a team of five undergraduate researchers, Stobart has found an important region in the structure of the protease in the mouse hepatitis virus, a coronavirus of its own that affects mice and is safe to study in a lab. It’s structure mimics coronaviruses that affect humans. They hypothesize that inhibiting the enzyme’s effects on the protein could stop the virus’ replication," according to a release sent out by the university.

“Without the protein, the virus is dead,” Stobart says. “It’s a vital target that a lot of groups in the past have looked at to develop therapeutic options. What we’re doing is trying to mutate parts of this enzyme to figure out what regions are potential targets for the drug.”

You can read the more on the study and other information from Butler University below.

As a microbiologist and virologist, Stobart finds new behaviors in viruses with the goal of biochemists or pharmacologists to then create medicines to fight the virus. Stobart says the research on nsp5 should be finished this spring and ready to publish in the summer.

By understanding the important parts of the protease, a drug can be developed to throw a hammer into the coronavirus’ machinations. Those regions of the enzyme that can’t be mutated without killing the virus are important to map on the protein’s structure. They are “hotspots” for biochemists to attack with therapeutics. The important area they identified is called the interdomain loop within the protease. The project began in 2018 but in 2020, the research has real-world applications.

“This virus’ mortality rate is much less than SARS and MERS, closer to about 3 or 4 percent, but it’s spreading much more quickly,” says Stobart, whose last decade of research projects have included coronaviruses that affect humans.

Benjamin Nick, a Biology and Chemistry major, has worked in Stobart’s lab since his first year at Butler. Well-versed in lab techniques, Nick’s work started out like the proverbial “needle in a haystack” but zeroing in on nsp5 has revealed exciting results. Using a serial dilution technique to work with manageable levels of virus, Nick helped identify key residues in the mouse virus samples that could translate to therapeutic targets against human coronavirus strains.

“We put progressively less virus into our racks, from 10 times as strong to 1/100,000th of dilution,” Nick says. “We grow the virus at different temperatures—37 degrees celsius for normal homeostatic body temperature to 40 degrees celsius to mimic a human spiking a fever.”

Nick says working on the coronavirus project has been fulfilling and he is looking forward to seeing his name on published research that could have major ramifications in coronavirus treatment.

“Over the last couple years, I’ve had the dream of developing a thesis and seeing it come to completion,” he adds. “Now that I've put in the work, done the things I need to do to prepare myself and gather the data, I can do that. It’s exciting to see how much of an impact my research time here at Butler can have.