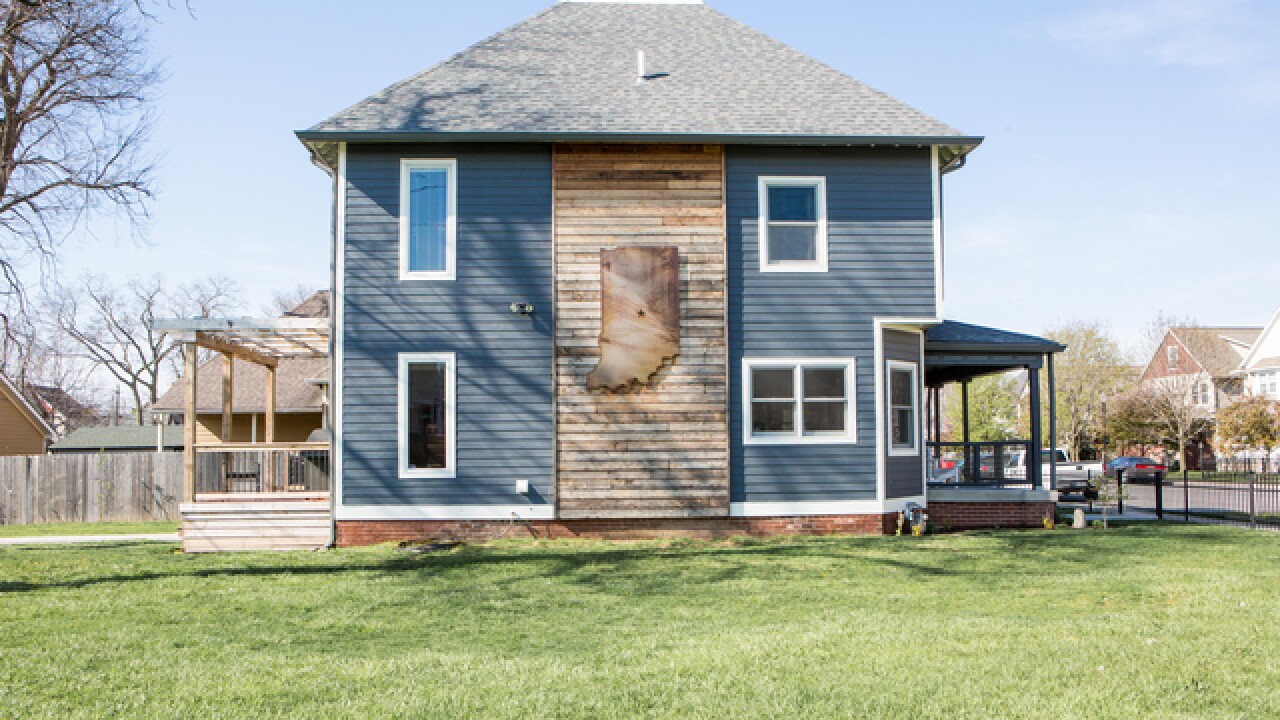 Copyright 2017 Scripps Media, Inc. All rights reserved. This material may not be published, broadcast, rewritten, or redistributed.
Lora Olive
Jake Nelson's original art piece of the state of Indiana weighs over 125 pounds and took seven people to install.

INDIANAPOLIS -- You've probably driven by it: A big, wooden map of Indiana on the side of a modern home in the revitalized Fall Creek Place.

Jake, Bethan and their son Gideon Nelson live in the home at 22nd and Delaware and their journey to this unique house started across the street, where they used to live.

Jake wondered for months when the city would tear down the original structure that used to be in this American Foursquare-style home's place.

"It looked like Jumanji from the outside,” Jake said.

The more the family looked at it, the more they grew curious about what it would take to buy and rehab it.

They submitted a huge proposal packet to the city in order to be considered. The city wanted homeowners, not developers to take on the project.

It took about 18 months to stick out the process and they were convinced they were the right choice for this huge undertaking. With patience and a little bit of good timing, they were able to buy the two lots next to the house within a year of purchasing the original structure.

"The house was a really fun project from start to finish with only two or three days of stress.  It came together way better than we expected,” said Jake.

The Nelsons moved to downtown Indy 10 years ago, and especially after taking on this massive project, they have no plans to leave.

Inspirations
The main inspiration for the house came from the desire to reuse as many materials as possible within the house as well as materials they've collected over the course of the two-year rehab.

They wanted people to walk into the house and not be able to say, “Oh I’ve seen that ______ before.”

With a few small exceptions, the finishes they've used in the house are one of a kind, carefully collected and put together for the final product.

The other, more practical inspiration was to build a home that was as nice as possible without spending a fortune. They came in on budget by doing the work themselves over two years and collecting materials beforehand.

Design Elements
The layout is open and filled with light but there are a few finishes that they still love as much as the first day they put them in.

Flooring:  It is all reclaimed from about 10 different places (old churches, house rehabs, craigslist, dumpsters). It was a pile for flooring the size of a small car that they sorted and installed piece by piece.  It was a ton of extra work, but well worth the time. Kitchen Island and lights: The island is made from hickory butcher block they got out of the old GM Stamping plant. They reinforced three pieces with an iron bar and it sits on legs that came out of a factory in Chicago. The lights came out of a warehouse off 16th street. Jake refinished the piece using a process of muriatic acid and water. The Indiana sign: Probably the most noticeable thing about the house.  It weighs 125 pounds and took seven people to install.

"This was kind of an experiment on my part. It turned out pretty slick.  I’ve got a few more art installations in the works for the rest of the property that hopefully will be as well liked by the community…or not, but hopefully it makes a few people smile,” said Jake.

Biggest design challenge
The house was in really solid shape. They changed the layout a few times and they don’t think they would do anything differently. They didn’t want to add on to the house to make it bigger so they worked with what they had.

"That can be a challenge with rehabbing: You have a certain footprint that you try to squeeze everything you want and use every available square foot,” said Jake.

Proudest DIY project
The floor is their favorite DIY project. They really had no clue how it was going to turn out until it was almost done. The other projects Jake could picture in his head and just make them. Jake didn’t let Bethany see the floor until the day they moved in to keep it a surprise, and fortunately, she approved.

Biggest indulgence
Good windows and doors. They live on Delaware and it’s loud, but they like their house to be quiet.  They got Marvin windows and doors from a contractor that was selling a package on craigslist that he mis-measured for another house. They bought the windows early on and designed all of the window and door openings throughout the house to fit. They say it was totally worth the investment (which was about half of the retail price).

Their Design Advice
Don’t buy the latest trends: They will be outdated next year. Use material you like and actually want in your house. The entire industry is built on making your house outdated in a few years so you’ll buy new cabinets or tile or flooring.  It’s impossible to keep up with, so don’t try to keep up.

By far, the most amazing find in this whole project was a hat pin portrait of the original owner they found behind the plaster on an exterior wall in their son's room.  Perfectly preserved for 130 years.  It has very little value but is super important to the history of their home.

Jake works at the Center for Inquire School 27 in the library and Bethany is the Director at Wheeler Mission Ministries.