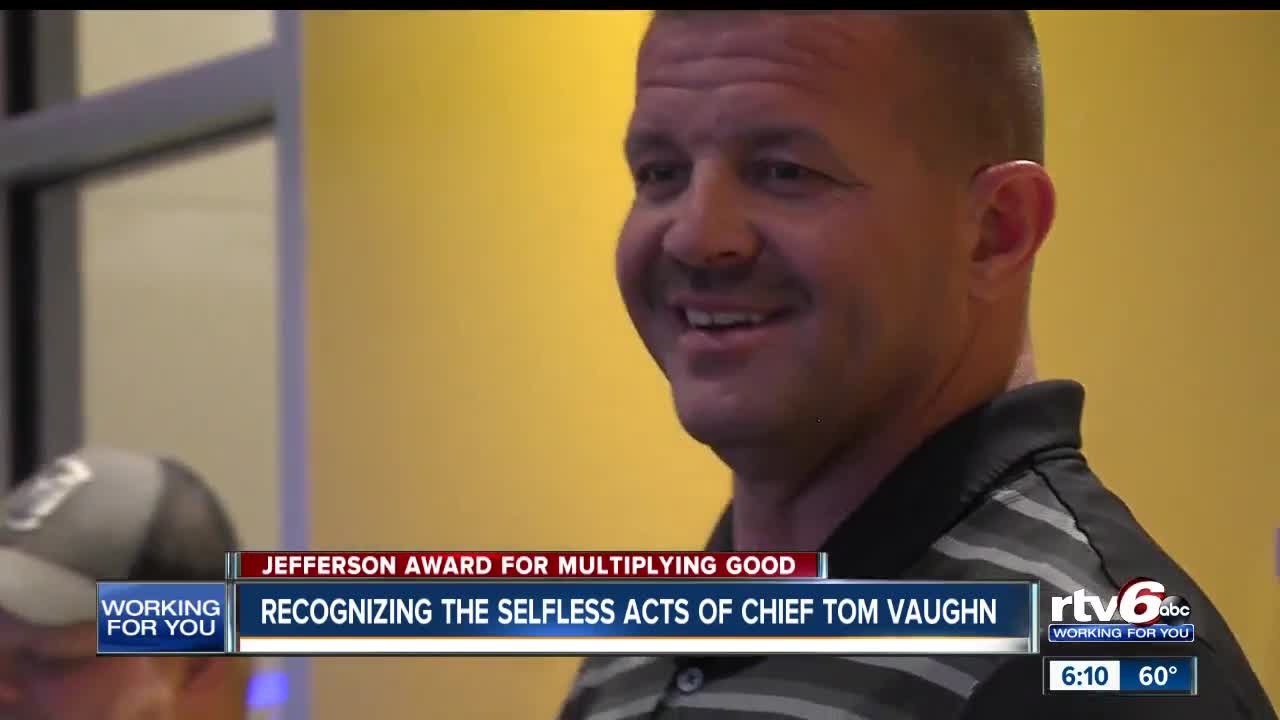 Those who know him say he has a 'Servant's Heart.' However, it's what he does behind the scenes that has earned him a place among RTV6's unsung heroes.

INDIANAPOLIS — Tom Vaughn is a family man who's been married for 32 years and raised three kids. He's a leader as Chief of the Southport Police Department.

Those who know him say he has a 'Servant's Heart.' However, it's what he does behind the scene when he takes off his Chief-of-Police hat, that has earned him a place among RTV6's unsung heroes.

"It's something instilled in us at a young age — that we needed to be able to give back as much as we get," Chief Vaughn said. And he fills his time doing just that.

Vaughn is raising money for a little girl named Savannah, who has terminal cancer.

His mission is to make sure she's comfortable and happy, as he works behind the scene to handle medical bills and prescription drug costs.

"I gave her a little badge that I wear on my suits, and she told her mom that she was in charge now and you couldn't mess with her because she was the police chief," Vaughn said. "I mean that's the kind of little girl she is."

Chief Vaughn has also held his department together as officers and staff mourned the loss of several colleagues, including the tragic shooting death of Lieutenant Aaron Allan who was killed on duty when responding to a crash.

"We've had five officers in 19 months, and that's a lot to deal with," Vaughn said. "And that leaves those families that we want to make sure they're taken care of."

However, it was the way Chief Vaughn cared for an officer who had no family that really struck those on his force.

Officer Rich Parnell — who was an only child after losing both his mother and father — received the news that he had an aggressive form of cancer attacking his throat and brain. With no family around, Chief Vaughn stepped up.

"Rich and I got really close. I would take him to his chemo appointments, his doctor appointments. Make sure he got his medicine and that kind of stuff," Vaughn said.

"And not just take him and drop him off but to sit there and you know, encourage him. That's what probably pushed Rich to fight as hard as he did," Officer Bradley Ryan, with Southport Police Department, said.

For nearly a year until his death, Parnell had Chief Vaugh by his side during those weekly six-hour chemo treatments.

Officer Ryan told RTV6 that when Officer Parnell was too weak to walk, the Chief literally carried him to his appointments.

"He was like a brother to me," Vaughn said.

"I mean it's character," Officer Bradley said. "It's what you do when no one is looking. And I think that speaks highly of his character."

He's even helped the family of a teenager from Perry township, who died in a car crash, pay for the funeral and get them out of a hotel and into a home.