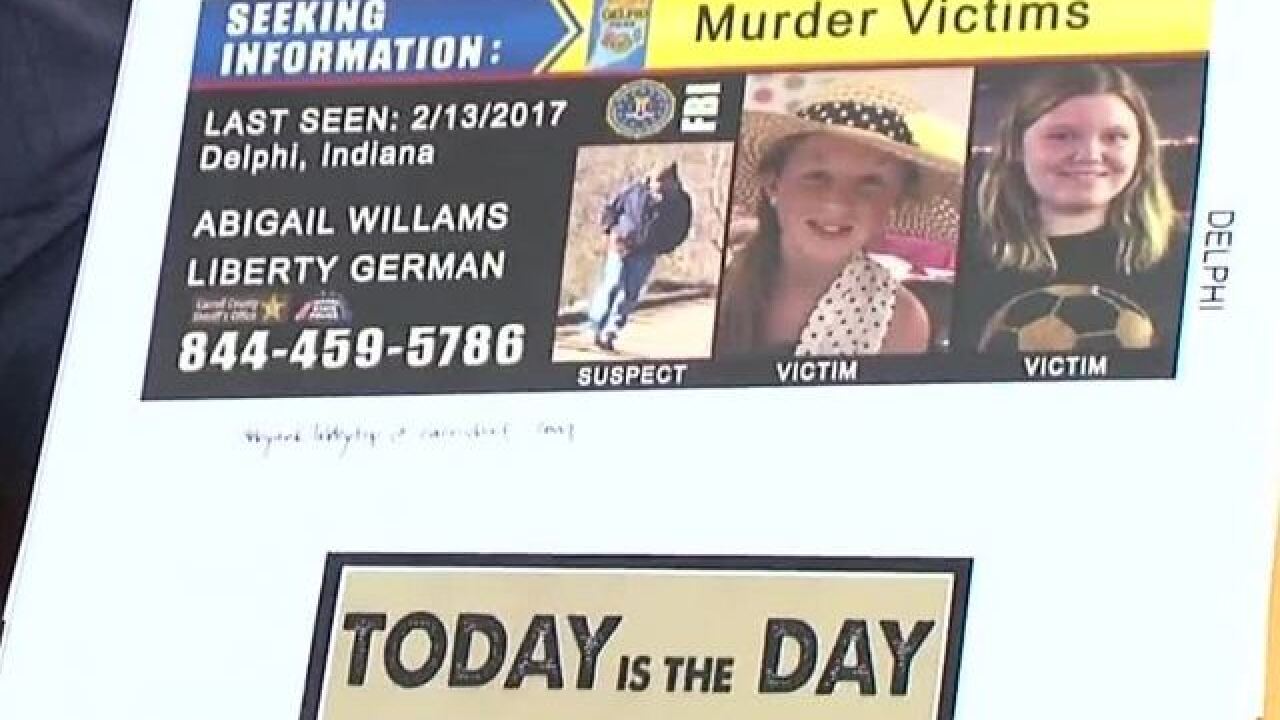 Almost three months since the investigation into the murders of two Delphi teenagers began, the motto remains the same.

Hundreds of investigators from Indiana State Police, the Carroll County Sheriff's Office, Delphi City Police and the FBI have been working around the clock for almost three months to find who killed 13-year-old Abigail Williams and 14-year-old Liberty German.

Each day begins with a prayer and ends with those words:

Investigators have received more than 16,000 tips and interviewed 500 different people in connection with the murders.

The numbers are daunting for someone on the outside looking in, but confidence inside the Delphi investigation team remains unfettered.

Sergeant Holeman is the lead investigator in the case.

He leads a team of hundreds, but even with so many people and resources at their disposal, going through the thousands of tips hasn't been easy.

Like many on his team, he's spent sleepless nights and hundreds of hours poring through evidence that might put them closer to finding the girls' killer.

Holeman says they've chased dozens of leads - but so far they haven't received that one tip they need to solve the case.

"It's a roller coaster ride," said Sgt. Holeman. "You're up - you think you've got something good, and for some reason it's eliminated or whatever. That's tough on anybody."

Libby and Abby were taking advantage of a warm February day off from school when they went hiking on the Monon High Bridge. Their bodies were found the next morning on a private piece of property less than a mile from where they were last seen alive.

The first few days investigators spent hours collecting evidence and interviewing anyone who might have been able to give them a clue as to what happened that day.

Two key pieces of evidence have been the Delphi team’s focus: A photo of an unidentified man walking along the bridge and a short audio clip of a man’s voice saying the words “down the hill.” Both pieces of media were taken by Libby on her cellphone. Both are believed to be the chief suspect in the girls’ murders.

And despite those thousands of tips and leads, police are still trying to find the man in that photo.

READ MORE | Delphi teens murdered: What is the evidence?

Flyers, billboards and even commercials seeking information about the girls' murders have popped up across the country, which generated even more potential case-changing information.

But because of the widespread attention from around Indiana to as far away as Russia, it's been a struggle for investigators to keep fake information about the murders from spreading.

State police have had to debunk dozens of rumors, including multiple recurring ones that connect the man who owns the property where the girls' bodies were found, Ron Logan, to their murders, especially after Logan was arrested and pleaded guilty to unrelated charges after driving on a suspended license the same day the girls went missing.

Logan was questioned in connection to the murders, but he is not being labeled a suspect.

RELATED | 'Maybe in the future, no one will be murdered in my backyard'

Delphi is a small town of less than 3,000 people and Police Chief Steve Mullin said they've always felt they were safe, but Libby and Abby's murders have changed that.

Chief Mullin said one of the hardest things he's had to deal with since the investigation began is the fear it has brought to his community.

"Those people who before maybe wouldn't lock their doors are now locking their doors," said Chief Mullin. "Those people who maybe were not before so concerned every second about where their children are at, now are. It's much different than it's ever been in our community than ever before."

"I'm not even sure that we knew how to react or respond," said Sheriff Leazenby. "Because we haven't had this. This has been something this county has never had before."

"We have all worked tragic cases, but nothing like this," said Sgt. Holeman. "I can't even put anything close to this case."

Those involved have been focused and determined, leaving little time to take care of themselves.

Sheriff Leazenby said, even three months in, they still have to make people take a day off to recuperate.

The support from those following the case closely has helped. Sgt. Holeman called the support they’ve received “overwhelming.”

Pictures and notes of thanks line the investigation's headquarters in Delphi, greeting law enforcement as they come in and reminding them why they're there: To find Abby & Libby’s killer.

No one on the team doubts that they will do that.

"I feel just as confident as we did from day one," said Sheriff Leazenby. "We will find this individual.”

“We have faith in our community and we’ve had faith in the law enforcement all along," Anna said. "We cannot thank those folks enough for all they’ve done. I know that these guys have put a lot of hours, a lot of time away from their families because they’re trying to help ours. They spend as many sleepless nights as we do.”

READ MORE | Abby & Libby's families sit down for an intimate interview for the first time: Coping with loss is hard, but they are driven by justice

"We're going to catch this monster," said Sgt. Holeman. "Whoever did this needs to be put away and we're not going to stop until we find this person."

Investigators still need your tips - no matter how small you think they are.

The FBI is asking everyone to take a closer look at the people around you and report any major changes in behavior or appearance over the last several weeks, anything that seems strange, so they can check it out.

"If a person started abusing drugs, if a sleep pattern has changed - any indication like that taken on its own doesn't mean a thing, but when it's put into a broader context of timing and location, maybe," said FBI Special Agent in Charge Greg Massa.

The FBI is looking for anyone who:

The FBI still has a 24/7 tip line set up and although the numbers have gone down, they're still receiving between 20-25 tips each day about the case.

"In a tragic crime like this, really only three people know what happened that day," said Massa. "Two of them are dead - and the other one is the killer."

The reward for information leading to an arrest in the girls' murders is now over $234,000 and continues to grow.

Though the "dust has settled" in Delphi and the group of people working on the investigation may be smaller, they are no less motivated.

"We're going to get that one tip, that one lead. We'll find that piece of information that's going to lead us to the person or persons responsible for this," said Sgt. Holeman. "That's the one thing I think about every day when I walk in here."