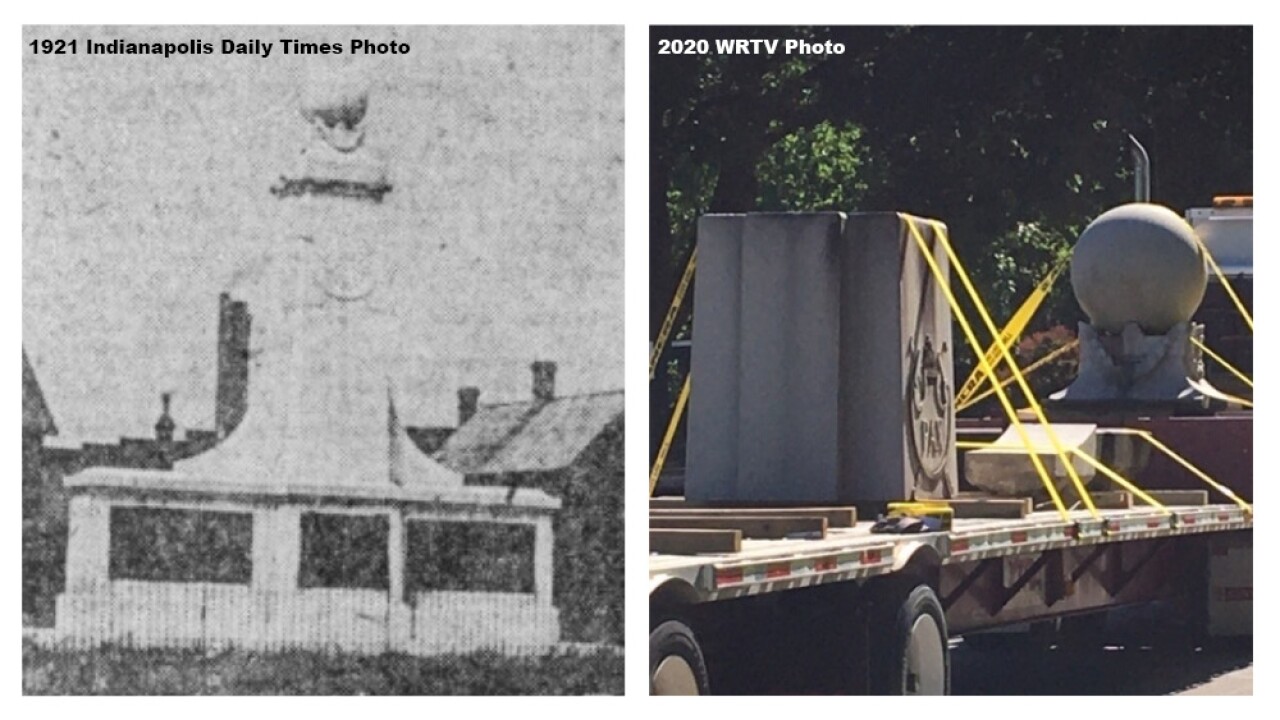 INDIANAPOLIS – Indianapolis' Confederate monument came crumbling down Monday morning, bringing an end to a controversial symbol erected in the city more than a century ago.

Despite Indiana’s status as a Union state, the monument was installed at Greenlawn Cemetery in 1912 to commemorate the Confederate prisoners of war who died at Camp Morton in Indianapolis.

In the 15 years after its installation, some groups hosted annual Memorial Day ceremonies for the Confederate soldiers, according to Indiana newspapers from that time.

“Not even the Confederate dead were forgotten, and at Greenlawn cemetery, where more than 1,500 Confederates lie buried and where a monument stands in their memory, appropriate exercises were held under the auspices of the Southern Club,” a May 30, 1918 article reads.

The Southern Club was a group of Indiana residents who held events celebrating southern culture, which included the Confederacy. In the late 1910s, the Southern Club started pushing to move the monument from Greenlawn Cemetery to a different location in Indianapolis.

The 1919 resolution in the Indiana Senate, requested by the organization, states the monument is “surrounded by factory sites and unsightly conditions where once was located the beautiful Greenlawn cemetery. … This monument was erected by our federal government as a public record of the names of those men who gave their lives faithfully believing that they served a just cause, however erroneous that belief may have been, and is a thing of beauty deserving more appropriate surroundings than are now accorded it.”

Republican Rep. Ralph E. Updike introduced a bill in 1928 to move the monument to Garfield Park. Updike spent two terms in Congress, from 1925-29. Updike was the Klan-supported candidate in his election, according to the Indianapolis Times. But it’s unclear if Updike was a member of the Klan.

“[Updike] is reputed to be backed by the Ku Klux Klan, which is seeking to obtain an invisible grip upon the government popularly supposed to be a government of the people,” a September 1924 article reads.

Since 2017, the city of Indianapolis has wanted to remove the monument but couldn’t find a donor to fund the removal costs, or a museum to house it. Last week, Mayor Joe Hogsett announced that the monument would be removed and put into storage.

“For some time, we have urged that this grave monument belongs in a museum, not in a park, but no organization has stepped forward to assume that responsibility,” Hogsett said. “Time is up, and this grave marker will come down.”

In a release, the city said it was moved to Garfield Park in 1928 following efforts by public officials, active in the KKK, who sought to “make the monument more visible to the public.”

The monument was dismantled in a matter of hours Monday.