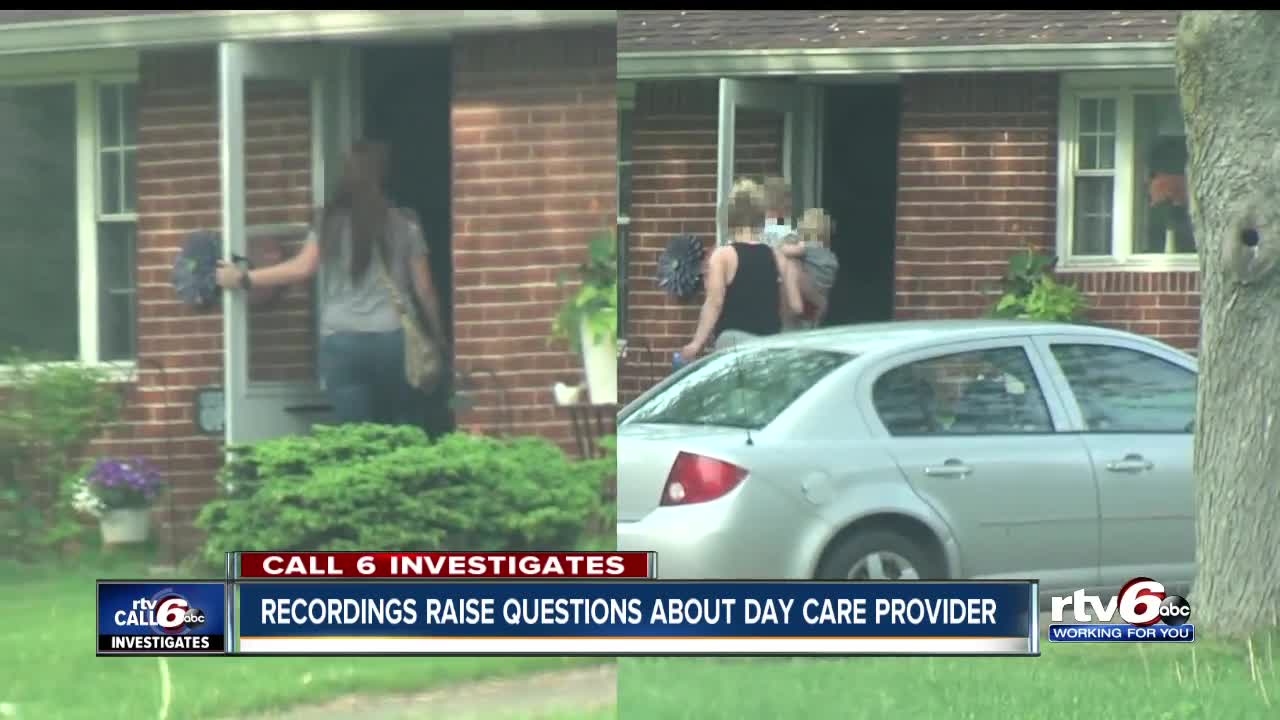 Call 6 Investigates uncovered a child care provider with a history of operating illegally. GREENWOOD, Ind.— Call 6 Investigates has uncovered new information about a Greenwood child care provider with a history of operating illegally, including that the day care’s operator may not have notified the state of her new location.

The Johnson County jail was recording Martinez in August 2018 as she talked to Kenneth King, her boyfriend at the time.

Martinez was watching children while she was talking to King, who was awaiting trial for unlawful possession of a firearm by a serious violent felon.

“Hey, don’t push him!” Martinez said, apparently to a child in her care, as crying can be heard in the background. “If you do that again, I’m going to whoop your butt hard.”

Call 6 Investigates first introduced you to Martinez back in February, a child care provider with a history of watching too many children without a license.

Following our story, Call 6 Investigates received numerous emails and Facebook messages with concerns about Martinez, including her relationship with Kenneth King.

In September 2016, the Attorney General’s office filed a lawsuit against Martinez to stop her from operating illegally.

In January 2017, Martinez reached an agreement with the Attorney General’s office saying she would care for five or fewer unrelated children and pay a fine.

On August 17, 2018, the Attorney General filed a motion in court accusing Martinez of violating the 2017 court order stating she operated a daycare on Harvest Moon Drive with more than six children without a license.
MORE |
How to tell if your child care is licensed, unlicensed or illegal
| TIMELINE: Greenwood daycare's history of operating without a license

In the newly obtained recordings, Martinez talked to King about the state’s case against her.

“I got some mail today from the state where they’re trying to get me for contempt on an original charge from when I got in trouble the first time for having too many kids,” said Martinez in the recording.

Martinez explained to King why she was too busy to answer another one of his calls.

During their conversation, Martinez read a letter she wrote to the judge in Kenneth King’s criminal case.

“I have also decided to allow Kenneth to reside at my home and make it our home,” said Martinez in the audio recording. “We are praying you allow him to serve home detention/house arrest. I have ran my own in-house daycare business for 15 years. I am a law-abiding citizen and have every intention of standing beside Kenneth King every step of the way.”

Both expressed frustration about the people who reported Martinez to the state.

“I guess I’m going to have to delete my daycare Facebook for a while because someone has been printing pictures off and reporting that I’ve had more than the allowed amount of kids I’m supposed to have,” said Martinez. “As soon as this is all over with me, ha ha ha. It is on.”

King responded, “As soon as I get out.”

“We have to play it safe a little bit,” said Martinez.

In October 2018, Martinez and the Attorney General reached an agreement in which Martinez said she would only watch five or fewer children without a license, pay a $3,600 civil fine and also agreed to two years of unannounced inspections by FSSA.

As part of the agreement, Martinez must also notify FSSA and the court of any changes in her address or the address of the day care.

Since our story aired, Martinez moved out of the Harvest Moon Drive home after her landlord filed an eviction against her, records show.

Call 6 Investigates stopped by in April, and crews were cleaning out toys and other debris out of the home.

Martinez posted on Facebook this month that she’s still running a day care.

A neighbor told us her new location is on Lovers Lane in Greenwood.

When Call 6 Investigates stopped by the Lovers Lane home on May 17, we saw Martinez, children inside the home including some on a bouncy house.

And just after 6 pm, several parents arrived at the house including one with a child.

The court order says she can watch children, as long as there’s five or fewer in her care.

The Attorney General and the Family and Social Services Administration were not aware of Martinez’ Lovers Lane location.

“Ms. Martinez is supposed to notify the court and FSSA of any address changes,” said Melissa Gustafson, Public Information Officer at the Indiana Attorney General. “The Office does not have a notification of a change of address, and the court docket does not reflect any such notification. The Office continues to work with FSSA to monitor compliance with the Court’s order.”

Kenneth King did not move into Martinez’ day care home.

King was convicted and sentenced to time in state prison, and won’t be released until December 2023, records show.

After our story aired, Martinez paid the state the $300 she owes.

Call 6 Investigates emailed Martinez and offered to speak with her on camera.

“I am in compliance with the court, I care for the amount of children I never closed my daycare,” said Martinez in a statement to RTV6. “As far as Kenneth King , no I do not have plans of him moving in with me. There is not a relationship to be concerned about.”

Martinez also referenced a child at the day care.

Call 6 Investigates reported in February that a child was injured at the day care in July 2018.

“The proper authority’s (sic) have investigated the situation that occurred while the child was in two adults care and have found no reason to continue any further after interviewing the child,” read the statement from Martinez. “I’d appreciate for you to respect my family’s privacy with no further contact. Focus more on the providers that are using drugs and tattooing while children are in their care and leave good providers alone.”
HOW TO CHECK A CHILD CARE FACILITY
• Plug in a provider's name to ChildCareFinder.IN.gov and look for complaints, inspection reports, and any pending enforcement
• Use your eyes and ears when visiting. Are they following safe sleep? Is equipment working? Are children strapped into their high chairs?
• Drop by the child's day care unexpectedly during the day. What is seen at pickup and drop off may be very different than what's happening during the middle of the day
• Ask to see the provider's license or registration, which should be posted in a public area. If the provider is on probation, it will say so on the license, along with the reasons why.
• Ask to see a copy of the day care's discipline policy. Corporal punishment is not illegal in the state of Indiana
• Ask what their current child-to-staff ratio is. Experts say accidents are more likely to happen when staffers are watching a lot of children.
• Ask if the provider is part of the state's voluntary rating system, called Paths to Quality. The state said this helps guarantee they're meeting and/or exceeding licensing requirements regardless of type of day care
• If you use an unlicensed facility, know they do not have to submit to background checks, CPR training, safe sleep training and other requirements. Ask to see proof your provider has completed these.