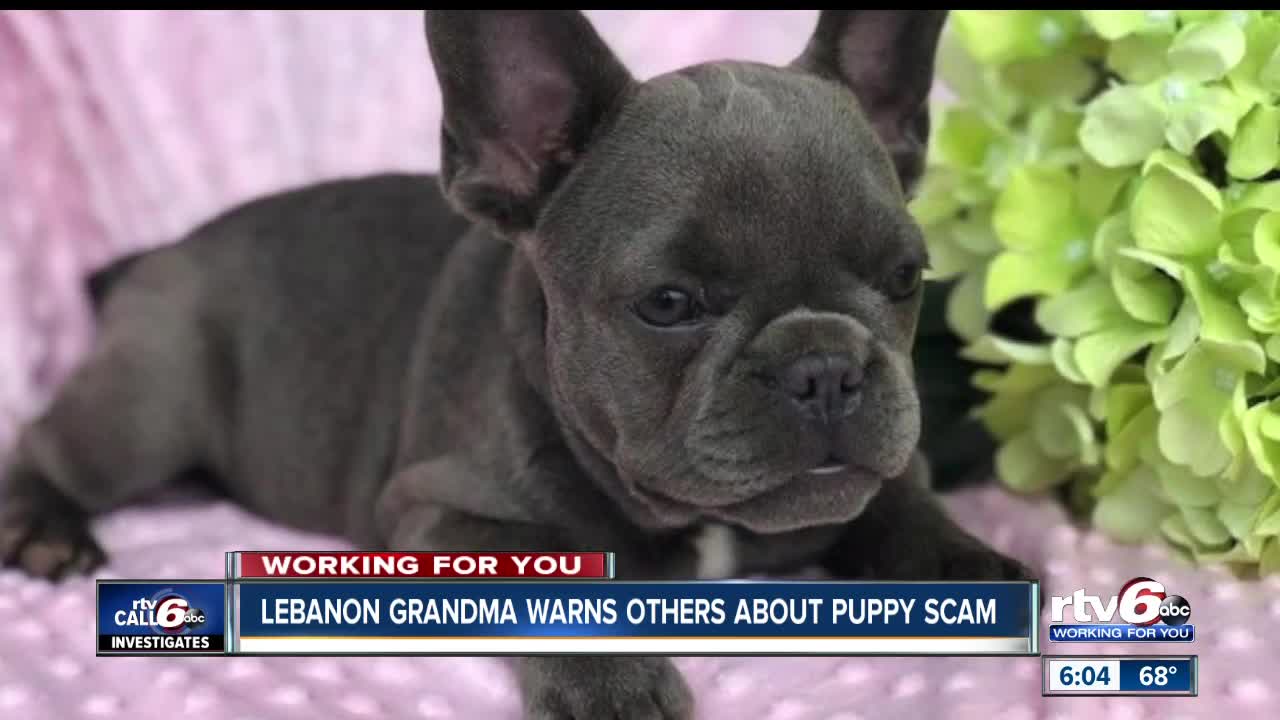 LEBANON — A Lebanon grandmother says she lost $850 to a puppy scam and is now using her story to warn others about how easily the scammers can trick you.

Diana Budreau and her granddaughter were concerned about Budreau's husband when he became so distraught over the loss of his beloved pet.

“She said ‘papa is so sad, we’ve got to find him a puppy,’” Budreau said. “My granddaughter insisted on a puppy, so that’s why we started looking at breeders.”

The family banded their money together to surprise Papa with a French bulldog puppy. Budreau’s friend referred her to a breeder called Enjoy Puppies.

“I found who I thought was them on the internet, and they were very responsive, sent pictures right away,” Budreau said.

Budreau selected a dog, talked to the breeder on the phone, and after signing a contract she agreed to wire Enjoy Puppies $850.

Budreau became suspicious after doing some more research and contacted the breeder for a refund.

“I told him you’ve never felt the wrath of a Nana with a granddaughter whose heart has been broken,” Budreau said.

Budreau reported it to the Better Business Bureau who told Call 6 Investigates the grandmother was a victim of a puppy scam.

“In this case, the breeder went out of business, shut down the website and a scammer came in and took over that website,” Tim Maniscalo, CEO of the Better Business Bureau Serving Central Indiana, said. “People are thinking this is the same breeder, and in this case the scammer was the one operating the website.”

The Better Business Bureau says scammers often use realistic-looking websites to pose as breeders and get your money.

“The puppies are the most adorable things you’ve ever seen, and you go online and fall in love with them,” Maniscalo said. “You get one online and pay the money for it, and the puppy never shows up, and there’s an endless amount of excuses and stories, such as the puppy is coming from overseas or needs veterinary care.”

Budreau said she thought she did her due diligence by using a breeder that was recommended to her and by talking to the company on the phone.

“My granddaughter was ready to surprise Papa for his birthday and we didn’t get to,” Budreau said. “It’s been very disappointing.”

Looking back, Budreau realized there were a few red flags including the breeder’s refusal to take a credit card or Pay Pal, as well as the price of the dog.

Budreau also reported the incident to the Federal Trade Commission, the Internet Crime Complaint Center and Google. “I had the website shut down in a day,” Budreau said. “It’s a huge, huge problem. I didn’t realize until I started investigating it myself.”

The www.enjoypuppies.com website is now suspended, and no one answered the phone when we called. Call 6 Investigates left a voicemail and a text message and we are still waiting to hear back.

The BBB says anytime you go through an online breeder, you’re taking a risk. The BBB recommends seeing the dog in person before you give them any money.

“Get references and talk to people who have gotten a pet from this breeder,” Maniscalo said.

Diana Budreau has chosen another breeder in St. Louis to get another French bulldog puppy.

“She sends me pictures and videos,” Budreau said. “We put a small deposit down.”

Budreau is sharing her story in the hopes of helping others. “I don’t want this to happen to anybody else,” Budreau said. “Never wire money because the banks won’t back you up.”

You can file a complaint with the Better Business Bureau Scam Tracker here.

BBB Tips to Avoid Puppy Scams:
• Don’t buy a pet without seeing it in person. Do an internet search of the picture of the pet you are considering. If the same picture appears on multiple websites, you may be dealing with a fraud. You also can search for text from ads or testimonials to see if the seller copied it from another site.

• Never pay a stranger with a money order or through Western Union or MoneyGram.

• Always use a credit card in case you need to dispute the charges.

• Research prices for the breed you are interested in adopting. If someone is advertising a purebred dog for free or at a deeply discounted price, you could be dealing with a fraudulent offer.

• The Humane Society of the United States refers consumers to local shelters. They also have tips for finding a reputable breeder.