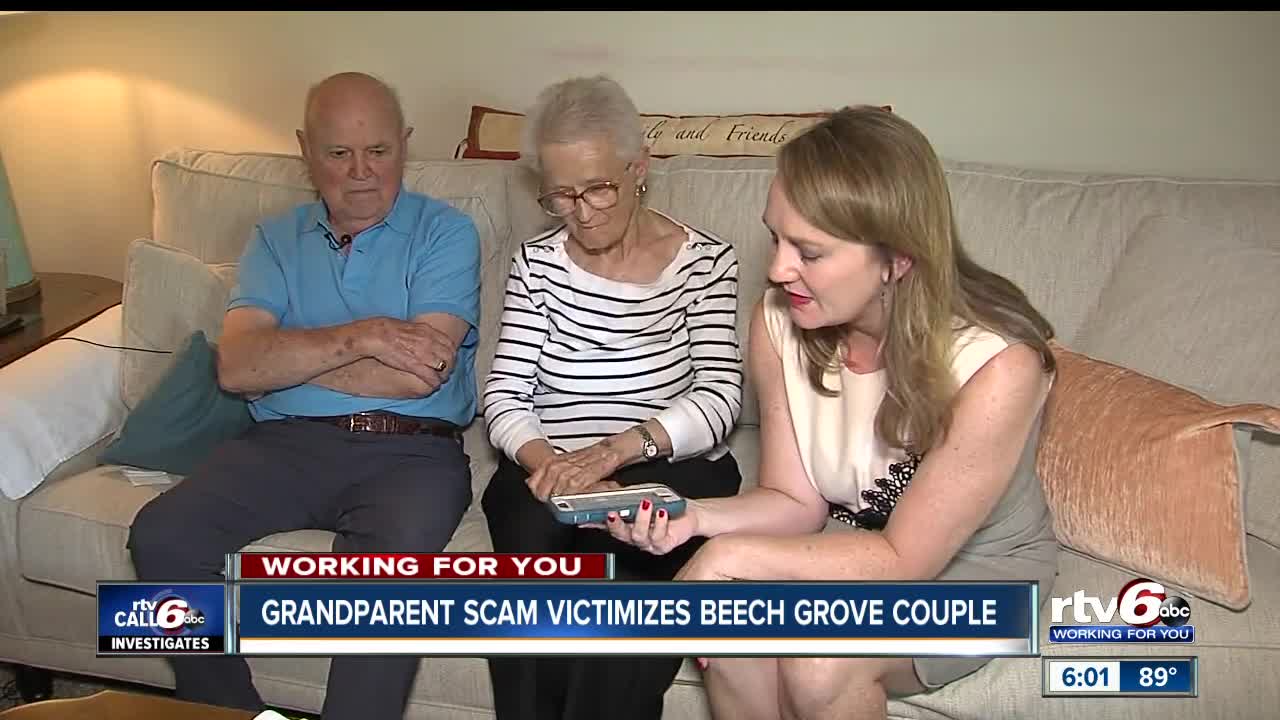 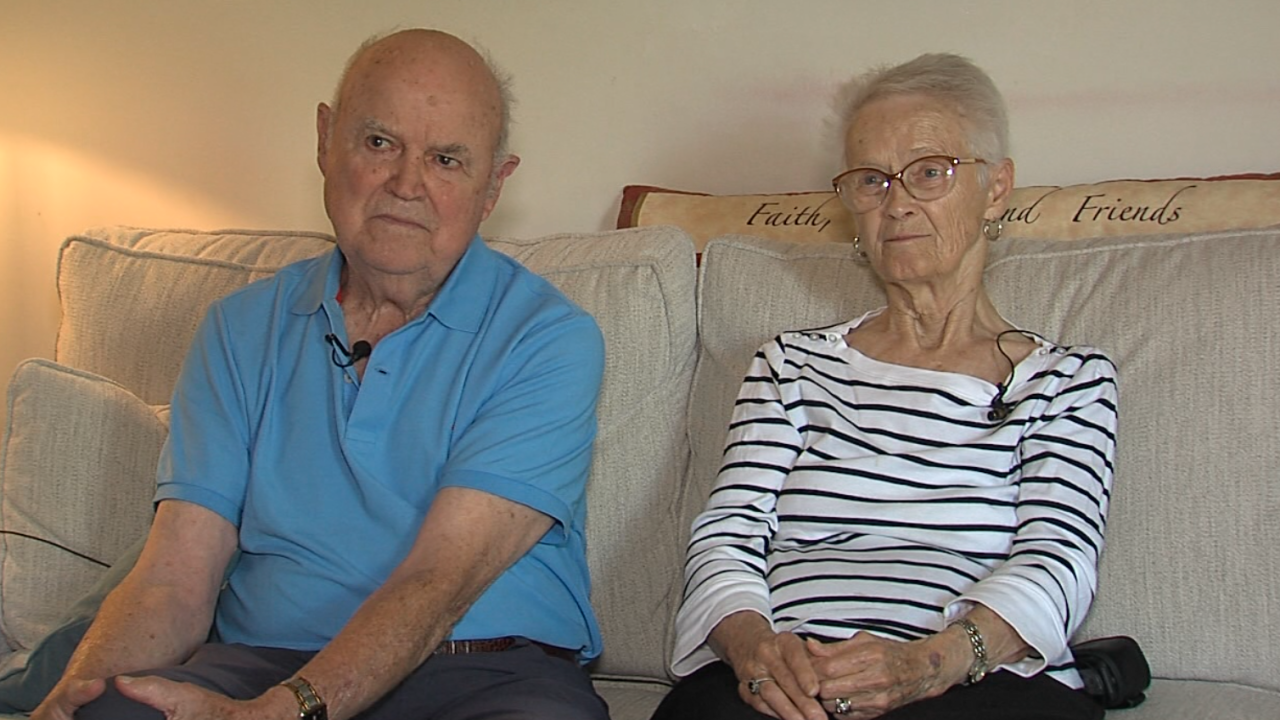 BEECH GROVE, Ind. — A couple from Beech Grove fell victim to a growing scam targeting your parents and grandparents.

It's called the grandparent scam—where scammers tell you your child or grandchild is in trouble, typically in jail or the hospital, and they need you to send money to help them out.

Shirley and Jerry Weaver have lived in Beech Grove for 50 years, and like many elderly couples, they live on a fixed income.

On Friday, they got a phone call saying their grandson had been in a car crash, had a broken nose, and received a DUI.

The "bondsman" put their grandson on the phone, and he sounded different.

"I know whenever you have a clamp on your nose, you don't sound like yourself," said Shirley Weaver. "So, I thought it was Kyle. We would do just about anything for him."

To get their grandson Kyle out of trouble, they were told to mail $9,600 in cash, so they went to the bank and got it.

"I thought well, it will take a while to pay it off," said Shirley Weaver. "I hope we live that long."

The caller told them to put the money in two separate envelopes, label them, and send it to an address in New Jersey.

"He said his name was Danny Morgan, and to send it to this address and don't tell anyone," said Shirley Weaver. "I was so scared for Kyle, but I kept thinking to myself it could be a scam."

Just before the Weavers were about to FedEx the money, Kyle called his grandma to ask about dinner plans.

"I knew something was going on, something was wrong, I could tell by the sound of her voice," said Kyle Lester. "She said 'hey I just talked to that guy, and we're about to send the money.'"

Kyle quickly realized his grandparents were victims of the growing grandparent scam and stopped them before they sent the money.

"Thankfully, I had the urge to call, and I'm glad I did," said Kyle. "If someone messes with them, it makes you angry. But it also makes you scared."

Call 6 Investigates called "Danny Morgan," or at least that's the name he gave the Weavers.

He declined to answer questions and hung up on Call 6 Investigates when we asked about the Weavers.

The Better Business Bureau says the scammers are preying on the elderly's sense of trust and their desire to help their families.

"That scammer will call and sound very knowledgeable like they know about your family," said Tim Maniscalo, CEO of the Better Business Bureau serving Central Indiana. "They know first names; they know who is related to who. It's very easy to get fooled with that type of scam."

Thankfully, Kyle thwarted the scammers before his grandparents lost nearly $10,000, but it's easy to see the couple still felt victimized by the ordeal.

Typically, it's a poor connection, which makes it tough to tell if it's really your loved one.

The caller often asks you to wire money or send gift cards.

The Better Business Bureau offers the following tips to protect yourself:
· Know the red flags. Typically, the grandparent receives a frantic phone call from a scammer posing as a grandchild, or a friend of the grandchild. The "grandchild" explains that he or she is in some kind of trouble and needs help. The "grandchild" pleads to the grandparents not to tell his or her parents and asks that they wire thousands of dollars for reasons such as posting bail, repairing a car, covering lawyer's fees or even paying hospital bills.

· Stay calm. Emergency scams count on an emotional reaction. It's important to resist the pressure to act quickly or react to the caller's distress. Tell them you'll call back and ask for a number; then contact your grandchild or another family member to determine whether or not the call is legitimate, and confirm the whereabouts of the grandchild.

· Ask a personal question, but don't disclose too much information. If a caller says "It's me, Grandma!" don't respond with a name, but instead let the caller explain who he or she is. One easy way to confirm their identity is to ask a simple question that the grandchild would know such as what school he or she goes to or their middle name. Your family might consider developing a secret code or password that can be used to verify a true emergency.

· Do not wire money. Wiring money is like giving cash—once you send it, you can't get it back. If you are asked to wire money based on a request made over the phone, especially to locations overseas, consider it a serious red flag. Always make certain of the recipient's identity before using a wire service or pre-paid debit cards.

· Communicate. Students should share travel plans with family members before leaving the state or country. Parents are encouraged to let extended family members know when their child is traveling.

· Share information. Students should provide cell phone numbers and email addresses of friends they are traveling with in the case of an emergency. Family members should remind students to be cautious when sharing details about travel plans on social media.

· Make a report. To report a scam or learn more about the latest scams trending in your area, go to bbb.org/scamtracker.