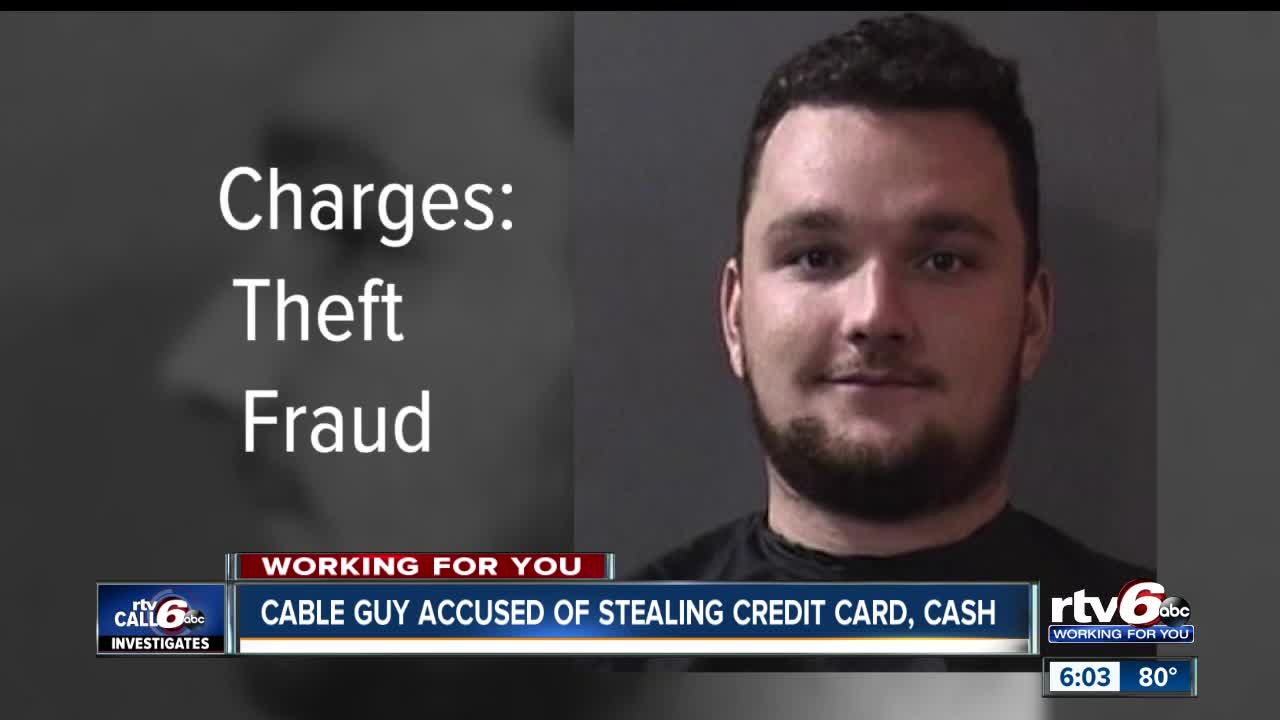 A cable guy is accused of stealing $1,000 in cash and used her credit card to make fraudulent purchases. CARMEL — A cable guy is accused of stealing a Carmel grandmother’s credit card and racking up thousands of dollars in fraudulent purchases.

The investigation began on May 17 when Carmel Police received a theft report from an 86-year-old Carmel woman who said her credit card and $1,000 in cash were stolen from her home.

The elderly woman said the only possible suspect was Wilson, who performed a recent installation at her home.

However, an ACI supervisor said he was only aware of three times Wilson should have been working at the victim’s home, and the supervisor said there were only two work orders generated for May 10 and May 14.

Carmel police say while at her home, he stole $1,000 in cash from her dresser as well as her credit card, which he used to make $5,485 in fraudulent purchases at Best Buy, Kroger, Door Dash, Netflix and several gas stations.

“She actually fixed dinner for this guy,” said Will Huiras, attorney for the Carmel grandmother. “She’s not doing well. This has really affected her.”

Carmel Police say Wilson made three different transactions of electronics on May 15 at the Best Buy store between 6:28 and 7:11 pm.

Carmel Police also contacted ACI who used GPS tracking to pinpoint Wilson’s vehicle at the Best Buy on May 15 between 6:12 and 7:14 pm.

The victim’s attorney says Comcast should be held responsible for its workers, even those working with contracted companies.

“They have the resources to comply with the law, and in this case, they just didn’t,” Huiras said. “They have a duty to properly vet these people and to supervise the people they’re sending into our homes, and they didn’t do it here. Much to the detriment of my client.”

Court records show Wilson was convicted in 2014 in Marion County of criminal conversion and criminal trespass.

In January 2014, Wilson took a mattress from a Walmart store and tried to return it without a receipt, and then tried to leave the store with the merchandise, court records show.

Wilson was arrested in December 2013 for theft at a Beech Grove Walmart and was notified he was no longer allowed on any Walmart property, and if he did, it would be considered trespassing, according to court documents.

Call 6 Investigates reached out to Comcast, which provided a statement indicating Wilson is no longer on the job.

“We are aware of the allegations against this contract employee, and both Comcast and his employer are cooperating fully as police continue their investigation,” said Mike Wilson, Public Relations Director, Comcast-Indiana. “In the meantime, he is no longer performing any Comcast-related duties.”

Call 6 Investigates reached out to ACI via email and we are still waiting to hear back.

RTV6 also called Wilson and offered to meet with him in person for an on-camera interview.

“The case is going to be dropped, so I’m not going to talk to anybody about it,” Wilson said on the phone. “They were false accusations.”

Wilson said he did not steal the elderly woman’s information.

“It’s none of your guys’ business,” Wilson said.

When RTV6 asked Wilson several more questions, he hung up the phone.

Wilson is due in court on July 30 for an initial hearing in Hamilton Superior Court 5.

“This is very disturbing, and we want the public to know,” Huiras said.

Tips from the Better Business Bureau on how to protect yourself if you’re having workers at your home.