Trump: Carrier to keep 1,100 jobs in Indy, invest $16 million in west side facility 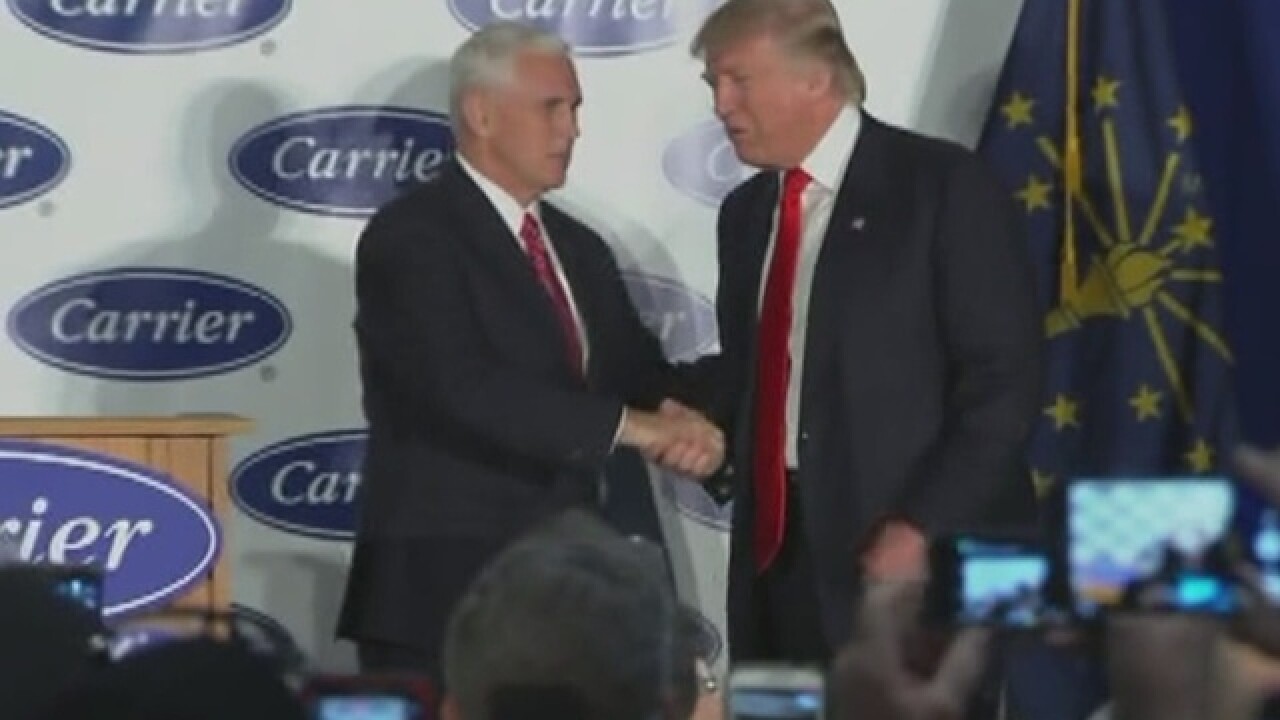 INDIANAPOLIS – More than 1,100 Carrier jobs are expected to stay in Indianapolis, President-elect Donald Trump announced Thursday afternoon at a press conference at the west side factory.

Carrier, a plant on the city’s west side owned by United Technologies, announced they were taking more than 1,400 jobs to Mexico in February. During Trump’s presidential campaign he said the situation wouldn't have happened if he were in office.

On Thanksgiving Day, Trump announced Carrier and his newly-elected administration were in negotiations with the company to save jobs.

A deal was struck and the company was able to save more than 700 jobs that were expected to leave for Mexico. Trump's 1,100 jobs in total saved includes the 300+ corporate jobs that weren't going to be leaving the country in the first place.

While speaking at the Carrier plant Thursday, Trump said United Technologies also agreed to invest more than $16 million into the facility.

In order to keep Carrier jobs in Indy, the company will reportedly receive a $7 million tax break over the next 10 years. Trump also mentioned the benefit of lowering federal corporate income tax so that more companies will keep their operations in the U.S.

Trump discusses lowering federal corporate income tax rate from 35% to 15%. Says "most of the regulations are nonsense." @IndyThisWeek

Trump: "We're losing companies, it's unbelievable. One after another." @IndyThisWeek @rtv6

Call 6 Investigates learned that the deal will keep 730 union, gas furnace production line jobs in Indianapolis, as well as 70 salaried positions. Carrier workers will not have to make wage concessions, and the company will honor its previously negotiated severance package.

According to the IEDC's Transparency Portal, United Technologies has received at least $4.3 million in state subsidies since 2007. Those subsidies came in the form of tax credits and training reimbursements, and were supposed to be attached to the company providing 2,235 jobs in the state.

Carrier also received at least $1.2 million in tax breaks from the city of Indianapolis, which it repaid in April after it announced its decision to move 1,400 jobs from its Indianapolis plant. That's in addition to $382,000 Carrier repaid in state training grants. The company is not expected to receive any of that money back.

IEDC and other state officials declined to comment on the details of the deal.

Trump said he initially didn’t know he made a promise to keep Carrier jobs from outsourcing to Mexico. He said he was watching the news last week and heard a Carrier worker's story.

"It was like he didn't event know they were leaving. He said, 'No, we're not leaving because Donald Trump promised us that we're not leaving.' I never thought I made that promise, not with Carrier. I made it for everybody else. I really didn't make it for Carrier," said Trump, going on to say "that ship had sailed."

While Trump did not reveal details on exactly what Carrier agreed to pay the workers who will keep their jobs, he said workers are, “going to have a great Christmas.”

Vice President-elect Mike Pence said, “this is a great day for working people all across the United States.”

He credited Trump’s leadership for Carrier’s decision to stay in the city and said Carrier is part of “Indiana’s success story.”

You can watch Pence and Trump's full speech in the video player at the top of this story.