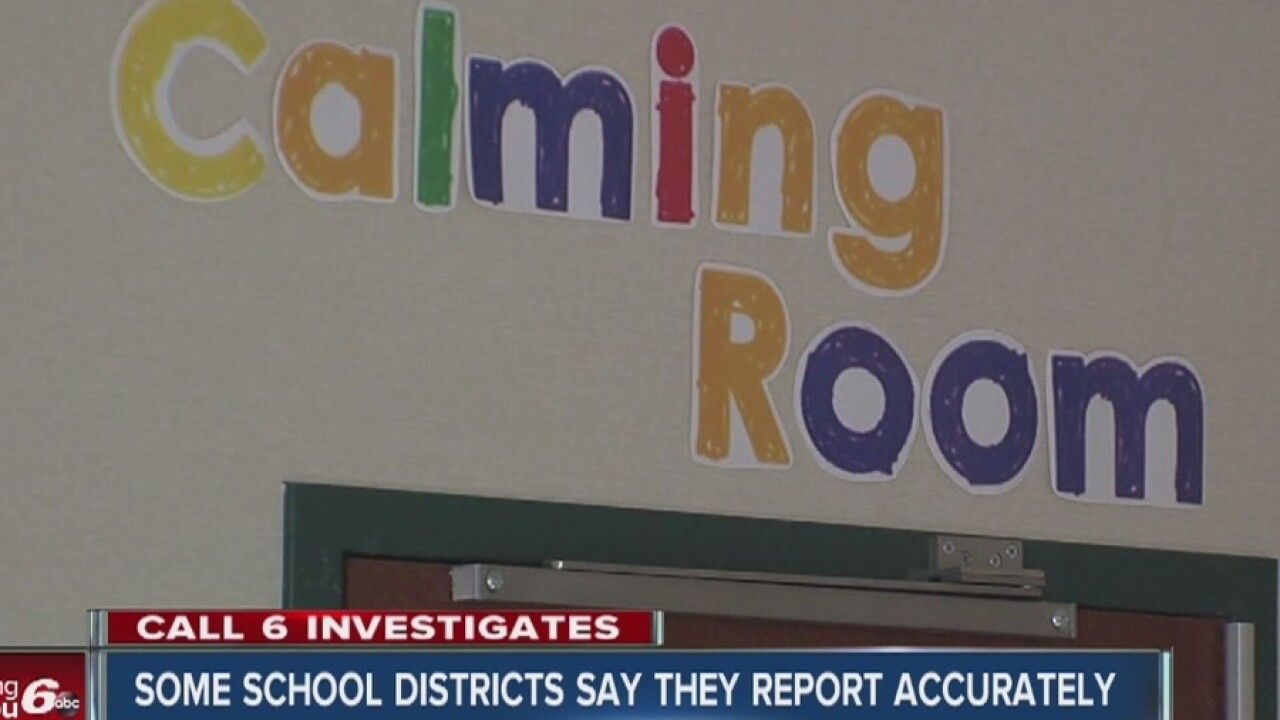 INDIANAPOLIS — The use of seclusion rooms and restraints at schools in central Indiana are meant to protect children, but problems with the reporting of their use leave child care advocates concerned about abuse.

As defined by the Indiana statute, seclusion is when a student is physically prevented from leaving, such as by being placed in a room by themselves, and restraint is when a staff person, such as a teacher, places the child in a manual hold in some way.

Seclusion and restraint are more likely to be used on children with special needs as a way to prevent them from hurting themselves or others.

Data obtained by Call 6 Investigates shows some school districts failed to accurately report the number of times a staff member secluded or restrained a child.

Per a new state law, Indiana school districts are required to report seclusion and restraint incidents to the state, as well as to the child’s parents.

More than half of school districts (54 percent) reported zero incidents of seclusion and restraint during the entire 2015-2016 school year, including some of the largest school districts in Indiana.

Nicole Hicks’ son Josh has autism and a mood disorder.

When he was 9 years old, he was restrained at a northeastern Indiana school.

“He came home with bruises on his wrists and parts of his arms,” said Hicks. “I never got a notice from the school.”

Hicks said she noticed an immediate change in her son.

Hicks testified in support of the new law that requires school districts to notify parents and the state when they use seclusion or restraint.

“It has to happen sometimes, but we have to look at when we’re doing it, how we’re doing it, and doing it correctly,” said Hicks. “I believe the seclusion and restraint law is so important because I believe it can change who these kids are and who they are becoming.”

Hicks is concerned about the data obtained by Call 6 Investigates.

“The zeroes, it's frustrating,” said Hicks. “I find it hard to believe that it’s not happening. To have a zero for a lot of schools, I don’t understand that.”

Call 6 Investigates checked with some districts reporting some of the highest numbers per student population, like Lafayette and Richmond, but those districts told us they misreported.

The Lafayette School Corporation originally reported 125 restraints and 962 seclusions, but when asked about the reports, the district’s superintendent said the numbers were incorrect.

“We have met with most of our buildings and have found some of our LSC teachers were recording a simple 'time out' for a student as a 'seclusion,'" said Lafayette Superintendent Les Huddle. “After reviewing the definitions of seclusion and restraint with teachers and then having the teachers review their records, we will be re-submitting to the state the following numbers for the Lafayette School Corporation.”

Keyes had not seen the numbers until we shared them with her.

“The data is flawed,” said Keyes. “At best, it’s inaccurate and unreliable.”

The problem, according to Keyes, is that there’s no teeth in the law and no punishment for districts who fail to report accurately.

“It’s great in theory that we have this, but in practice, it’s just falling short,” said Keyes. “I think it’s concerning when you have so many schools reporting zero. It shows me they don’t understand what they need to be reporting.”

Keyes said part of the problem is the definitions of seclusion and restraint leave a lot of room for interpretation.

Take a look at the below definitions, as described by the Indiana statute:

District With Highest Numbers Defends Use Of Rooms

Metropolitan School District Pike Township in Marion County has the highest number of reported seclusions for the 2015-2016 school year with 603 incidents.

Megan Ahlers, director of exceptional learners for MSD Pike Township, oversees special education and said their teachers take the definition literally: It's a seclusion when a student’s way out is restricted.

“We work with our teachers to report it accurately,” said Ahlers. “It really is from a handful of students. We have multiple behavior support classrooms in the district, in which some students are in crisis mode several times a day sometimes, and that would impact those numbers.”

Pike Township reported 603 uses of seclusions in 2015-2016
Ahlers took us inside one of the district’s 13 seclusion rooms, which they call calming rooms.

“This follows federal guidelines,” said Ahlers once inside the room.

“Many times children are in here for just a few minutes, really,” said Ahlers. “We allow the child to calm down. We don’t have any objects in here where they could hurt themselves.”

Ahlers emphasized the rooms can’t be used as punishment, but rather for children who are physically aggressive.

“We don’t ever want this to be a scary situation,” said Ahlers. “We don’t want any child secluded over 30 minutes.”

School staff can’t lock the door and leave a child in the room.

They have to stand at the door and hold it shut until it’s time for the child to come out.

“The walls have give to them and will continue to keep the child safe,” said Ahlers.

Ahlers said the district spends a lot of time and effort on training teachers and staff to avoid seclusion and restraint in the first place.

“Our whole focus is getting out ahead of ever having to seclude or restrain a child,” said Ahlers. “We want to be proactive.”

Ahlers said the strategy gets a bad rap, but the district is trying to be transparent about seclusion and restraint.

“Every parent is informed of a seclusion or restraint with or on their child,” said Ahlers.

The Commission on Seclusion and Restraint In Schools was created in 2013 by the General Assembly.

Commission members were frustrated with districts misreporting how often it’s happening, and how school leaders did not appear to understand the definitions of seclusion and restraint.

“We couldn’t have been any clearer,” said Dana Renay, Executive Director at the Autism Society of Indiana. “It just seems like a weak excuse for misreporting.”

The group is now investigating whether districts reported accurately, especially those that reported zeroes across the board.

They are working with the Indiana Department of Education to send out letters to districts reminding them of their obligation, and are also considering tweaking the language of the requirement itself to make it clearer for schools.

“I think every school district has had at least one seclusion during a school year,” said former school superintendent and commission member Dr. Denis Ward.

The Indiana Department of Education does not have the ability or the authority to monitor seclusion rooms, but schools districts are now required by law to have a seclusion and restraint policy.

“The department plays more of a support role rather than an enforcement role,” said Daniel Altman, spokesperson for IDOE. “Our focus right now is on making sure the data is as accurate as possible.”

Altman said the state can provide resources to school districts struggling with seclusion and restraint, including training and education.

“Any time you see data for the first time, you’re going to see some discrepancies,” said Altman.

What Can You Do As A Parent?

Nicole Hicks is also a member of the The Commission on Seclusion and Restraint In Schools.

Her son is now 19 years old and is still struggling with fear and anxiety.

She believes Josh being restrained had a long lasting effect on him.

“I do believe it played an impact on who he became,” said Hicks.

Hicks said many parents don’t know about the seclusion or restraint law.

“Every parent has to be active, whether you have a child with a disability or not,” said Hicks.

Policies
We compiled some examples of central Indiana schools' policies on seclusion and restraint. You can see those below.