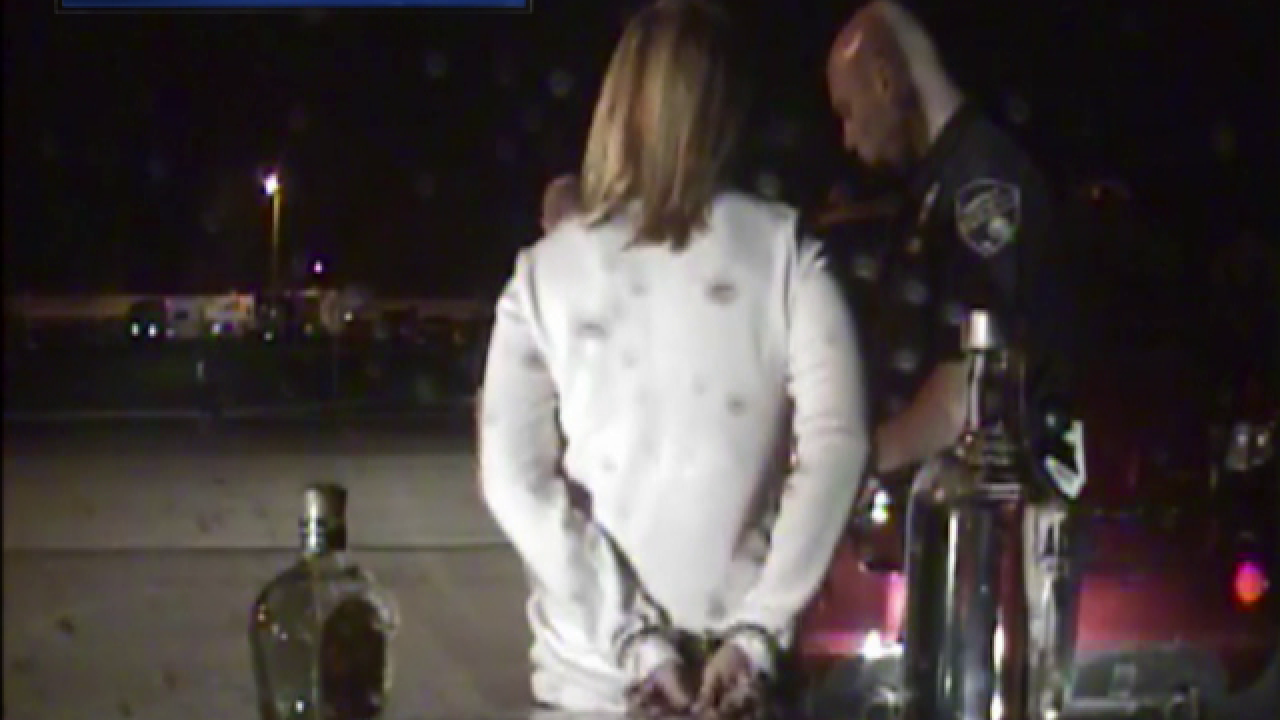 Copyright 2017 Scripps Media, Inc. All rights reserved. This material may not be published, broadcast, rewritten, or redistributed.
<p>Suspended Franklin attorney Julia Compton was arrested in March in Fortville</p>

JOHNSON COUNTY -- A suspended Franklin attorney is facing more than a decade in prison after her third arrest for drunk driving.

Julia Compton was arrested on December 29, 2016, in Johnson County and charged as a habitual vehicular substance offender.

Mothers Against Drunk Driving is also pushing for Compton to receive a prison sentence.

"Based on her history and her convictions of drinking and driving, I am concerned she's going to hurt herself or somebody else, and I want to keep this community safe," said Lael Hill, Indiana spokesperson for Mothers Against Drunk Driving.

Call 6 Investigates was unable to get video of Compton’s December 2016 arrest because the case is still pending.

However, Call 6 Investigates did obtain video of her March 29, 2012 arrest in Fortville.

Police pulled over Compton after officers saw her driving on the shoulder.

After failing her field sobriety and breath tests, police removed alcohol bottles from her car and struggled to get the handcuffs on her.

When they took her back to the Fortville police station, Compton told them she was an attorney.

At the time of her arrest, Compton was a licensed attorney in Franklin.

“I’m an attorney, please don’t do this,” Compton told the officer. “I will do whatever you want me to do.”

Just a few months after the March 2012 arrest in Hancock County, Compton was arrested again in June 2012 for drunk driving in Johnson County.

Johnson County prosecutors filed seven criminal charges against Compton including OWI with prior OWI within 5 years, OWI with a BAC of .15% or more, driving while suspended with a prior, and resisting law enforcement.

Compton’s actions caught the attention of the Indiana Supreme Court Disciplinary Commission, the agency that investigates allegations of attorney misconduct.

In 2013, the Indiana Supreme Court suspended Compton’s law license for six months, citing multiple alcohol related arrests within three and a half months.

She also had to serve two years of probation with monitoring from JLAP, the judges and lawyers assistance program.

She resigned in October 2016, and in December 2016, Compton was arrested a third time in Johnson County for drunk driving.

She’s facing more than a decade in prison if convicted.

It wasn’t until after Call 6 Investigates started asking questions about Compton’s case that her driver’s license was suspended in court on May 30, five months after her third drunk driving arrest.

Deputy prosecutor Rob Seet said Compton’s driver’s license suspension should have been automatic because Compton refused to take a test.

It’s unclear exactly why the suspension did not happen immediately following Compton’s arrest.

“I checked her license as I was kind of getting ready for trial, and I noticed that it was valid,” said Seet. “That’s a problem.”

Seet said they moved to impose Compton’s license suspension on the day they noticed, which was on May 19, and the court chose to address the issue at the May 30 hearing.

The BMV said they did not receive an order to suspend Compton’s license until June 1.

MADD is concerned about Compton driving on the road with other Hoosiers.

“We think the community is in danger and we think she should absolutely have an ignition interlock on her vehicle to prove that she's sober before she starts her vehicle to keep the public safe," said Lael Hill, spokesperson for MADD.

Call 6 Investigates waited for Compton to show up in court on May 30, but she did not.

“Compton’s lawyers said she is staying at the Amethyst House in Bloomington, a residential facility for people with addiction.

The Amethyst House is not an inpatient facility, so Compton can come and go during the day, but she has to be back before curfew.

Residents are allowed to use their phones, according to Amethyst House.

Call 6 Investigates reached out to Compton via phone and email.

“Thank you for attempting to contact me,” said Compton in an email. “Please direct any questions you may have to my attorneys.”

“She may be willing to speak in the future but now would not be an appropriate time,” said attorney Michael Kyle in an email to RTV6.

Compton’s law license was in good standing for several months following the arrest, but it’s now suspended for failing to comply with continuing legal education requirements.

Call 6 Investigates wanted to know how Compton could keep her law license despite a slew of alcohol related arrests.

“I think every case rises and falls on its own merits," said McGoff.

A criminal conviction does not necessarily mean an attorney will be disbarred, said McGoff.

Each year, the Indiana Supreme Court Disciplinary Commission receives about 1,600 complaints about Hoosier Attorneys, half of which are immediately dismissed due to lack of merit.

Complaints against attorneys only become public record if the commission finds possible misconduct and files a verified complaint.

McGoff said attorneys are held to a higher standard, much like police and judges, and have to follow strict rules of professional conduct.

"As part of the oath of attorneys is that you take an oath to uphold the laws of this country, of the state and your jurisdiction,” said McGoff. It’s inherent in that oath that you're going to uphold the laws, not violate them"

McGoff recommends before you hire an attorney, check to see if they have any pending or prior disciplinary cases.

"You would scrutinize that person, maybe have some questions for the lawyer if that's something you discovered as you were looking for a lawyer," said McGoff.

You can also check MyCase to see if the attorney has a criminal record.

Julia Compton's pending December 2016 drunk driving case in Johnson County is back in court on August 11.

Compton does not have to appear for the August 11 hearing if she is still in treatment at Amethyst House.

As for the March 2012 Hancock County case, Compton pleaded guilty to operating a vehicle while intoxicated and resisting law enforcement and sentenced to nearly a year of probation and a victim impact panel.

In the June 2012 Johnson County case, Compton pleaded guilty to OWI with prior OWI, a felony.

However Compton was granted alternative sentencing, and sentenced to a misdemeanor, so there is no felony on her record.  She was ordered to serve a 365-day sentence, including home detention and inpatient treatment at Turning Point.