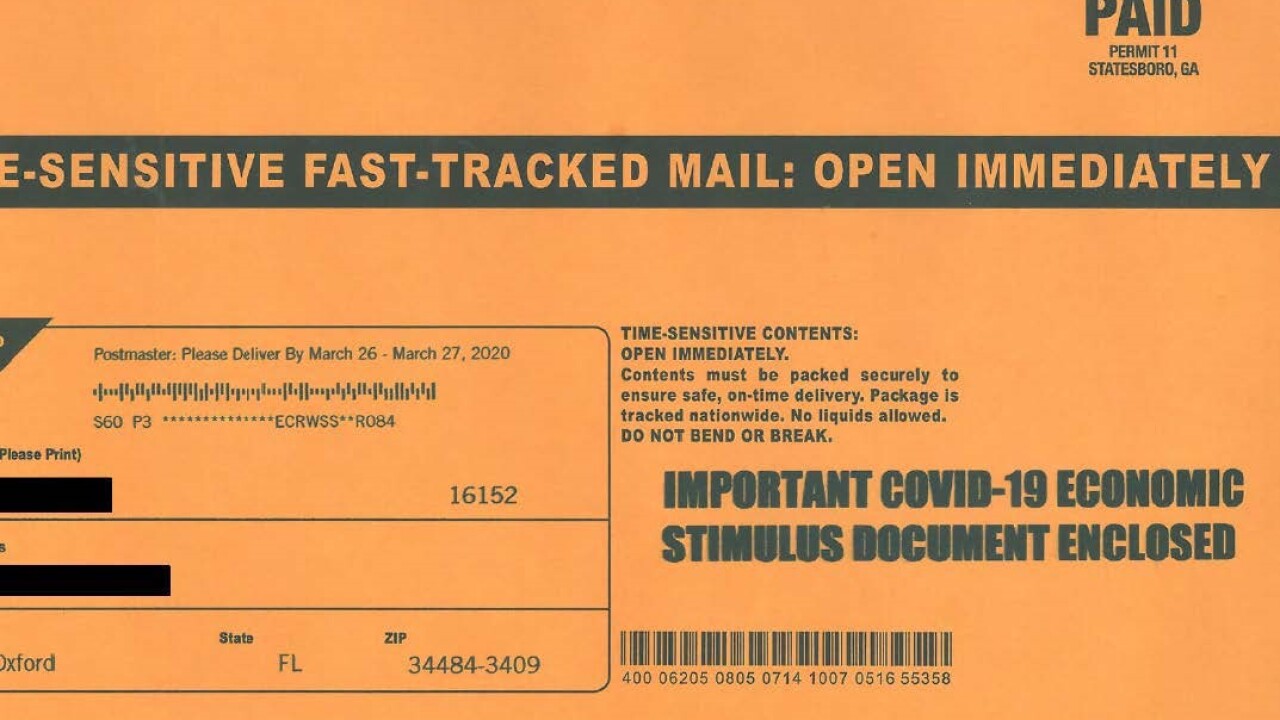 INDIANAPOLIS— The Federal Trade Commission is taking action against a company for allegedly luring consumers to buy a used car by using mailers that appear to be related to stimulus check payments.

The FTC says Traffic Jam Events, a direct mail marketing firm for car dealers, is falsely claiming in mailers that their “Economic Automotive Stimulus Relief Program” is affiliated with and approved by the government when it is not.

The mailers were labeled “IMPORTANT COVID-19 STIMULUS DOCUMENTS” and directed consumers to “relief headquarters” to “claim these stimulus incentives,” the FTC alleged in its lawsuit.

The envelope used for mailer, according to the FTC

According to the complaint, the defendants’ mailers referred to an address in Florida as “relief headquarters” and “designated local headquarters,” telling consumers that they must “must claim these stimulus incentives at your designated temporary 10-day site...”

The mailers also include a likeness of the Great Seal of the United States, as well as a mock check, labeled “Stimulus Relief Program,” the complaint alleged.

When consumers arrived to get their money, however, they only found a lot hosting a car sale, according to the FTC.

The mock check included in the mailer, according to the FTC

The FTC’s complaint notes that the defendants have been the subject of prior law enforcement actions in Indiana.

Call 6 Investigates did some checking and found the Indiana Attorney General’s office filed a lawsuit against Traffic Jam Events accusing them of sending mailers to 443,000 Indiana residents that appeared to indicate recipients won significant prizes when they had not.

A court ordered Traffic Jam Events to pay the state a $57,500 civil penalty, which was paid in February 2019.

When asked about the FTC’s latest action against Traffic Jam Events, the Attorney General’s office says it has not received any complaints regarding fake stimulus checks. The FTC’s new lawsuit asks the court to stop the defendants’ actions and to require them to provide restitution to consumers.

The complaint was filed in the U.S. District Court for the Eastern District of Louisiana.

RTV6 tried to reach Traffic Jam Events for a response and we are still waiting to hear back. If you believe you have been the victim of any type of scam or attempted scam, the Office of the Attorney General can help. To file a complaint, go to indianaconsumer.com or call 1-800-382-5516.