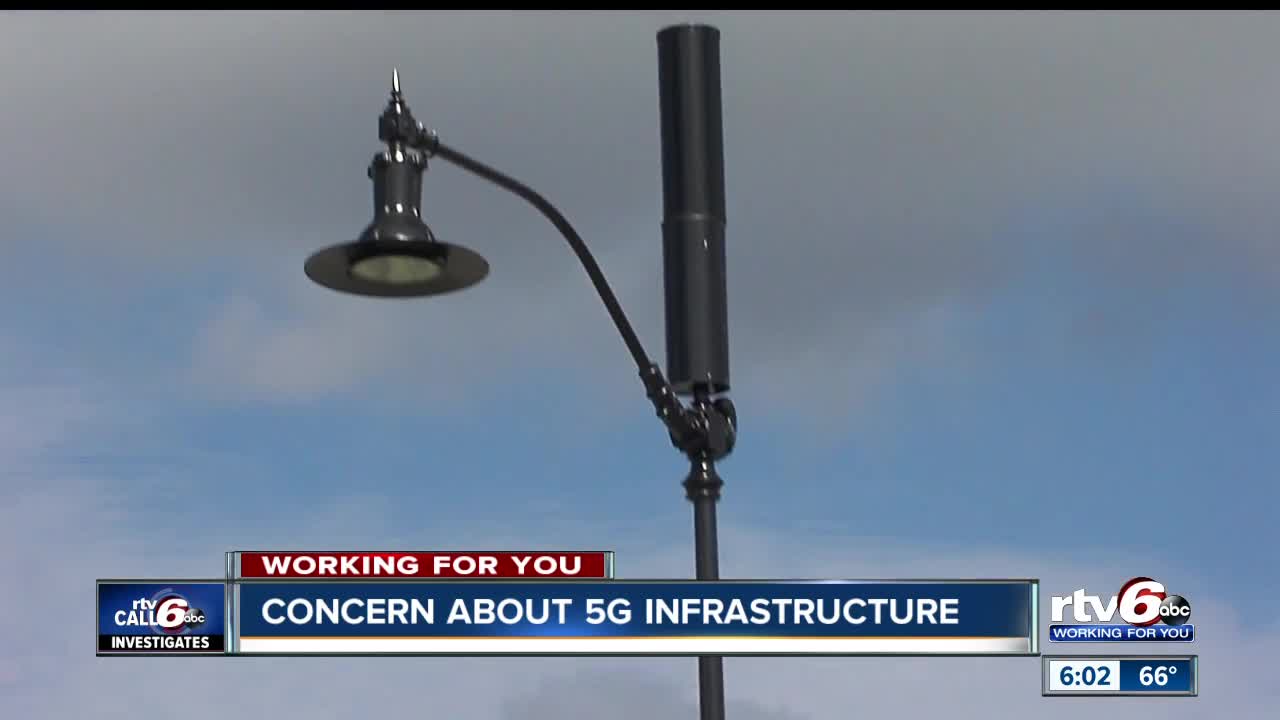 There's a push underway in Carmel to stop wireless companies from installing 5G small cell towers until the city can study their health impact.

CARMEL — Homeowners in Carmel are raising concerns about small cell towers for 5G technology popping up all over the city including by schools, bus stops, homes and businesses.

Now, there’s a new push to stop wireless communications companies from installing the towers until the city can study the impact on our health.

Unless you know what to look for, it’s easy to miss the circular structures mounted on top of light poles.

“It blends in but hides the fact that it is an actual cell antenna which is emitting radiofrequency radiation,” Gail Thomas, a stay-at-home mom who has lived in Carmel for five years, said.

In recent months, she’s grown concerned about the installation of small cell towers around Carmel.

“The big reason that concerns me is the proximity to homes,” Thomas said. “They’re actually inching closer and closer to houses. And that matters because we don’t want to put an unknown risk near our homes before we know a little bit more about what radiofrequency can do.”

On a black box near a small cell tower on Shelbourne, a sticker reads, “Radio frequency fields beyond this point may exceed FCC limits for the general public.”

Another warning sticker is so high up on the pole, no one can read it.

“You really need to be up on a ladder,” Thomas said.

Wireless companies are installing the infrastructure to improve their networks’ speeds to 5th generation cell network technology or “5G” for short.

Call 6 Investigates could not find any notification procedure in place requiring companies or cities to notify homeowners or businesses know when a small cell structure is installed.

We talked to another Carmel homeowner, who did not want to go on camera, who said she had no idea the structure just built in front of her house near 126th and Towne is a small cell tower for 5G.

The President of the Carmel Cable and Telecommunications Commission, Winston Long, is concerned about the impact on health.

In a September 19 memo to the Carmel City Council, Long pointed to a U.S. Health and Human Services study from November 2018 that found radio frequency radiation like that used in 2G and 3G cell phones led to cancer and tumors in male rats.

Long is asking city leaders to “immediately pause the installation of small cell antennas until more scientific data is available.”

Until now, the city’s Board of Public Works has approved the towers.

Kerwin Olson of the Citizens Action Coalition said a halt is needed not just in Carmel, but across the entire state of Indiana.

“That study looked at 2G and 3G technology, let alone 4G and 5G which is a much higher frequency,” Olson said. “The public is not being notified, there’s been no community meetings.”

Call 6 Investigates checked with the Indiana Utility Regulatory Commission, the state agency that oversees utilities, and a they could not tell us how many small cell towers have been installed in Indiana.

A city spokesperson and Long have not responded to Call 6 Investigates’ request for a list of locations of small cell structures in Carmel.

Olson said Senate Bill 213, which passed the legislature in 2017, authorized a massive roll-out of the small cell wireless structures all over the state.

“We have effectively granted eminent domain to wireless carriers to deploy these structures throughout our communities,” Olson said. “We are not sure what the impact of this technology is on health and human safety. Maybe this wasn’t the best idea to let this go on willy-nilly like it is right now.”

Call 6 Investigates reached out to AT&T and a spokesperson said.

“What I can say at this time is we're actively laying the foundation for a nationwide 5G network, but I cannot speak to specific locations,” said Phil Hayes, AT&T Corporation Communication. “In the meantime, you can find out more about AT&T's path to 5G here on our 5G microsite.”

Verizon directed us to CTIA, a national group that represents the wireless communications industry.

They provided the following statement to Call 6 Investigates:

“While we are not privy to our members’ deployment plans, we do have a study by Accenture which dives into the projected impact of 5G on localities. For Carmel, it’s expected that 5G will create an estimated $140M in economic growth and more than 850 jobs, and that $76M will be invested to bring 5G to the city.
(Study here. More information about other Indiana cities can be found here.)”

RTV6 also contacted the Indiana Broadband and Technology Association and we did not hear back.

Gail Thomas and the Citizens Action Coalition say they’re not anti-technology, but they want to hit the pause button on small cell towers.

“Pump the brakes. it doesn't mean forever, it just means let's have some discussions about the best thing to do especially around homes," Thomas said.

The issue will be discussed at Carmel’s City Council meeting at 6 p.m. Monday at city hall.

Long plans to present his findings to the council.