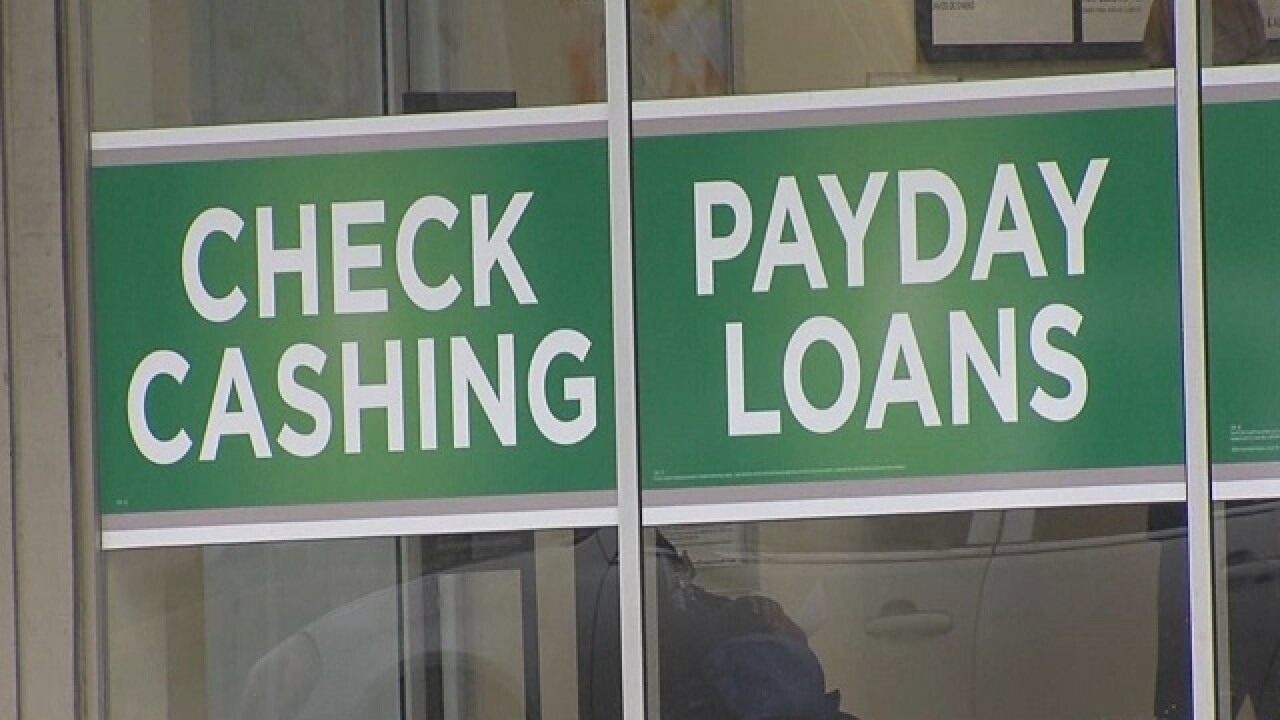 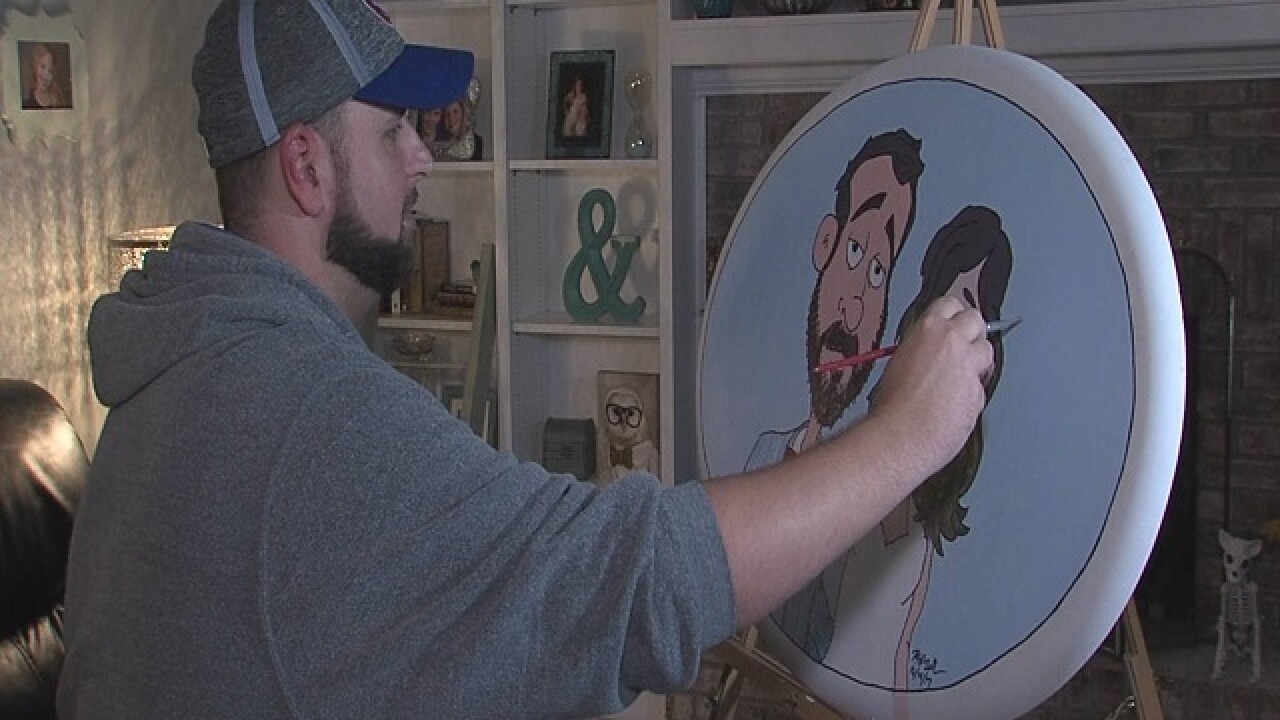 All this week in our Cost of Living Series, Call 6 Investigates Kara Kenney is digging into financial stressors that impact your daily life.

INDIANAPOLIS -- Payday loans, even a small amount, could end up costing you thousands in the long run, according to Indiana financial experts and a south side man who ended up filing for bankruptcy as a result of payday lending.

Mike Webb, a recruiter who lives on the south side, has been dealing with the impact of payday lending for the past decade.

Webb handed over his bank account information to the payday lender and got money fast.

“It was instant gratification, because the bill was paid and I felt great,” said Webb.

But when it came time to pay back the loan, Webb didn’t have the money.

The interest, finance charges and fees all added up, and Webb ended up $12,000 in debt.

"When all was said and done, my checking account was closed because of so many overdraft fees," said Webb.

Webb ended up filing for bankruptcy.

“At least half of the clients I file bankruptcy for have payday loan issues,” said Gaudin. "They get stuck in the trap of payday loans because the interest rates are so high, and then they have to take out new pay day loans to cover their previous payday loans, and then it leads to a vicious cycle where they go back to these places every other pay day."

"It's a major problem in Central Indiana," said Gaudin.

Federal regulators are cracking down.

Payday lenders will have to adhere to stricter rules including a “full payment test” before giving the loan, which means they have to determine if the borrower can afford to repay the loan in full with interest within 30 days.

However, the new rule is expected to face resistance in Congress and the payday lending industry is fighting back.

Proponents of payday lending say the service may save you money on bounced checks, bank overdrafts and other fees.

Payday loans do not require a credit report, so they can be appealing for customers with poor credit.

Gaudin said payday loans should be used as an absolute last resort.

"Do everything you can before you go to a payday loan place. Ask family to borrow money. Get a second job," said Gaudin.

Webb wishes he had looked for other options, and his credit is still suffering a year later.

“My advice would be to definitely think twice about it,” said Webb. “I wish I was better educated before I made that decision.  They don’t tell you they’re going to be coming after you, and they can take your money and you can end up with zero dollars in your account.”

Avoid the Debt Trap
•    Read the fine print before you sign
•    Ask friends, family for hep first
•    Try using your credit card to pay bills
•    Negotiate with creditors
•    Negotiate payment plans with your power company, hospitals, and others

“In its new rule governing short-term, small-dollar loans, the CFPB strips away access to regulated credit for millions of Americans, abandoning them to borrow from unregulated lenders or costlier bank programs. Narrowed from the draft rule proposed last year, this final rule flies in the face of the CFPB’s stated goals of leveling the financial services playing field and preserving access to credit, instead codifying the very flaws that resulted in widespread opposition from stakeholders on both sides of the issue during the public comment period.
“Most concerning, this rule completely disregards the concerns and needs of actual borrowers, who value this credit option and told the CFPB as much in the record 1.4 million comments submitted. Rather, it is the predetermined outcome of a contrived and deeply flawed rulemaking process, dictated by personal biases and politics and the outsized influence of ideologues and activists, to eviscerate a regulated industry and disenfranchise millions of American consumers.
“The Bureau engaged our industry’s fiercest critics – masquerading as consumer advocates – to write and revise the rule before, during and after the public comment period. It ignored calls to address the growing number of unregulated operators and its pledge to follow its own complaint data, which show that short-term, ‘payday’ loans account for less than two percent of all complaints.
“The rule specifically, unaccountably exempts most banks and credit unions from the major provisions of the rule – even when they offer identical products. This unsubstantiated decision to regulate providers instead of products demonstrates political expediency and the Bureau’s transparent ideological bias against non-bank lenders.
“Despite statutory requirements and rebukes from the Obama Administration’s Small Business Administration Office of Advocacy, the CFPB failed to adequately consider the significant impact this rule will have on small lenders and their customers. It also neglected to ever address the rule’s preemption of existing, effective state regulations and consumer protections, even after admonishment from 18 states’ attorneys general.
“With this rule, the CFPB has abdicated its central mission as an independent, non-partisan government agency to protect and empower consumers and create a level playing field, rushing the rulemaking as its director reportedly plans his campaign for governor of Ohio. While the Bureau aggressively pursued these restrictive, arbitrary regulations on a popular, regulated financial service, hundreds of millions of Americans’ personal and financial data were compromised and millions of others were the victims of unauthorized bank account openings and bill payments, all under the CFPB’s watch.
“President Trump and Congress must intercede, to protect American consumers and their right to access credit in the face of a Bureau committed to doing so in name only.”

“This federal small-dollar lending rule is a tremendous blow to the more than one million Americans who spoke out against it during last year’s comment period. Millions of American consumers use small-dollar loans to manage budget shortfalls or unexpected expenses. The CFPB’s misguided rule will only serve to cut off their access to vital credit when they need it the most. The rule is not only misguided, it’s hideously complex for loans of a few hundred dollars. The final rule is nearly 1,700 pages – more than 300 pages longer than the proposed rule.
“There was an unprecedented outcry against this rule during the comment period – setting a record for a CFPB rulemaking and marking one of the largest of any federal agency. Yet, from the start, the CFPB’s small-dollar loan rule was crafted pursuant to a pre-determined ideological agenda that relied on biased data, anecdotes, and closed-door dealings with so-called consumer groups that have long sought to eliminate small-dollar lending.
“The flawed rulemaking process raises serious questions that demand answers. Throughout the rulemaking process – even during the comment period itself – the Bureau ignored the input of small-dollar loan customers, industry, and numerous other experts as it rushed to finalize the rule. While it was clear that the Bureau was on an ideological campaign against payday from day one, the full scope of the rule has been less clear. At one point it covered all small dollar loans, at another point there were rumors that the rule would be bifurcated and what we have today appears to be some kind of hybrid. The shifting scope of the rule seems to be a function of expediency more than anything else.
“The questions about Director Cordray’s intentions and ambitions have created a cloud of suspicion over this rule. In particular, the timing of the rule raises questions about whether it was hastily issued to fit an artificial timetable and all the Director’s recent actions at the Bureau raise questions.
“The CFPB’s coziness with special interest groups during the rule’s crafting, its failure to address any kind of illegal lending in this final rule, and its disregard for the consumers who have spoken out against the rule only lend more credence to suspicions of a partisan political agenda guiding the Bureau’s actions.
“The CFPB’s actions have also raised a fundamental issue of whether the agency has observed due process or simply chosen an arbitrary route in its rulemaking. On several occasions, CFSA raised serious concerns over the CFPB’s inaccurate categorization of the unique, individualized comment letters it received. Additionally, CFSA expressed concern about whether the Bureau was appropriately reviewing and considering all public comments as required by the Administrative Procedure Act (APA).  CFSA also cited concern about the inconsistent process in which the comment letters were posted to Regulations.gov for public viewing.
“Given the overwhelming volume of customer comments and the CFPB’s duty to read each of them, it seems suspect that the CFPB was able to review the comments as it is required by law. Ignoring the people who use small-dollar loans shows that the Bureau has chosen special interests and activist groups over the very consumers it claims to protect.”