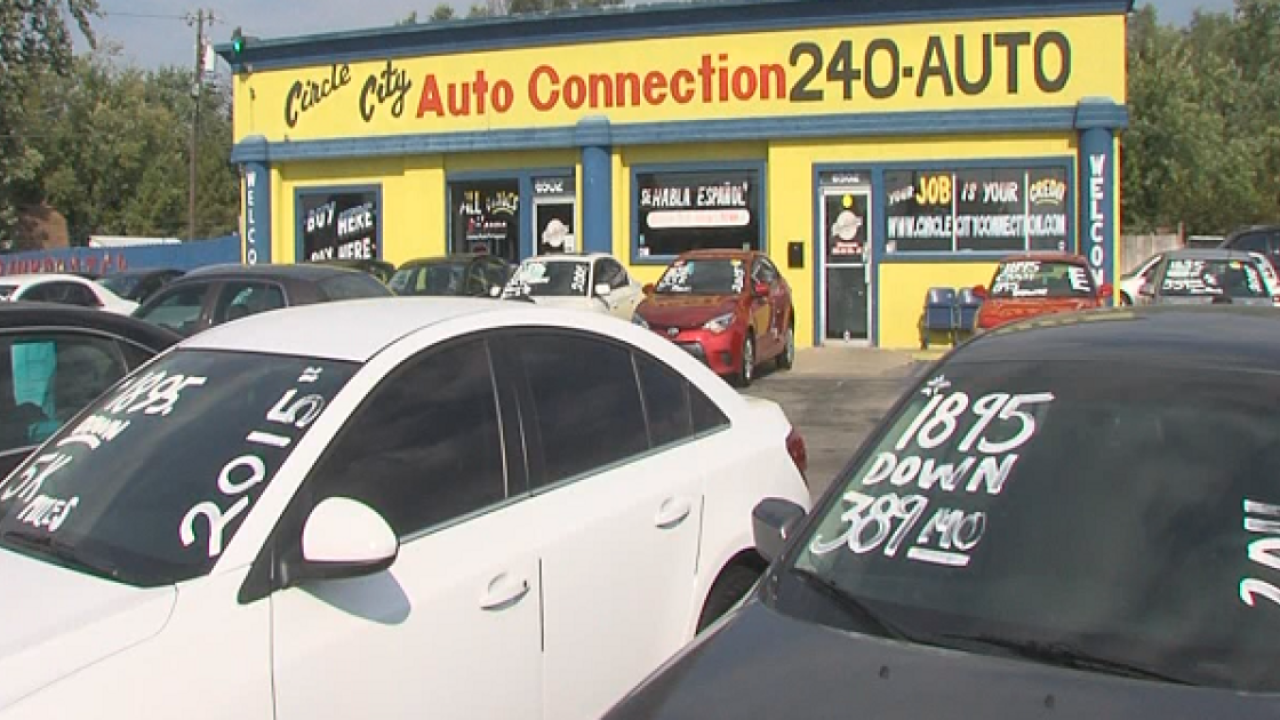 INDIANAPOLIS — Consumers who bought cars at Circle City Auto Exchange and related car dealerships are relieved the businesses will have to pay $100,000 in restitution.

Call 6 Investigates first exposed the business practices of Circle City Auto Exchange back in 2015 when customers complained the dealership did not disclose the vehicle’s crash history and other defects.

Our hidden cameras revealed a worker at Circle City Auto Connection on West Washington Street telling us a vehicle on their lot had not been in a crash, when in fact it had.

On April 6, 2020, a Marion County judge approved an agreement in which the dealerships have to pay $100,000 in restitution.

“I think it’s unacceptable for anyone to intentionally put people in physical and financial danger due to their carelessness and greed,” said former Circle City Auto customer Darnell Primm.

Primm was interviewed by RTV6 in 2015 after buying a car from Circle City Auto that did not have an airbag in it.

The restitution money was paid to the Office of the Attorney General, which will distribute it to consumers who purchased vehicles from the dealerships and were harmed by the alleged violations of the dealerships.

“I’m glad at least they have been held accountable for their actions,” said Stephon Macon, a former Circle City Auto customer who talked to Call 6 in 2015. “As a victim I felt betrayed and played. They sold me a car they knew had frame damage and didn’t disclose that to me.”

Consumers who purchased such vehicles can expect to receive a restitution claim form from the Office of the Attorney General in the coming weeks, according to the AG’s office.

Empire Auto Group Limited is the only one of the four dealerships that is still in operation.

Call 6 Investigates reached out to the attorney for the dealerships, Mario Garcia.

“We’re pleased to have convinced the State of Indiana that the likelihood of success in their novel claims was slim and there was risk the State would lose,” said Garcia in an email to RTV6. “That said, my clients had a desire to move forward in a positive direction and made a decision to resolve the dispute amicably.”

Many consumers who purchased vehicles from the dealerships experienced mechanical and safety issues soon after buying them, the state’s complaint says.

“Any business or person that deceptively sells vehicles to Hoosier consumers will face consequences,” Indiana Attorney General Curtis Hill said. “Hoosiers deserve truthful information about the vehicles they are purchasing.”

Additionally, the dealerships did not properly rebuild those vehicles for use on Indiana roads in accordance with state law, the complaint alleged, and also misrepresented the mechanical quality, safety and performance of the vehicles, while charging consumers excessive prices for them, according to the complaint.