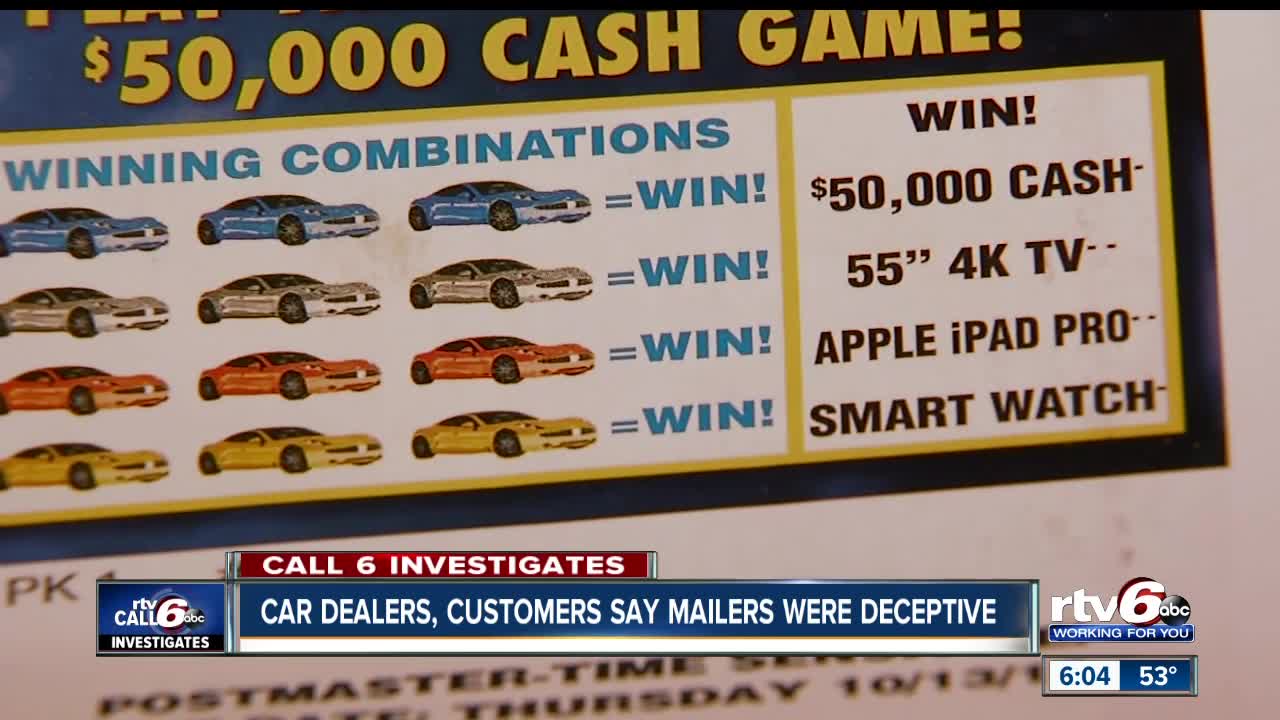 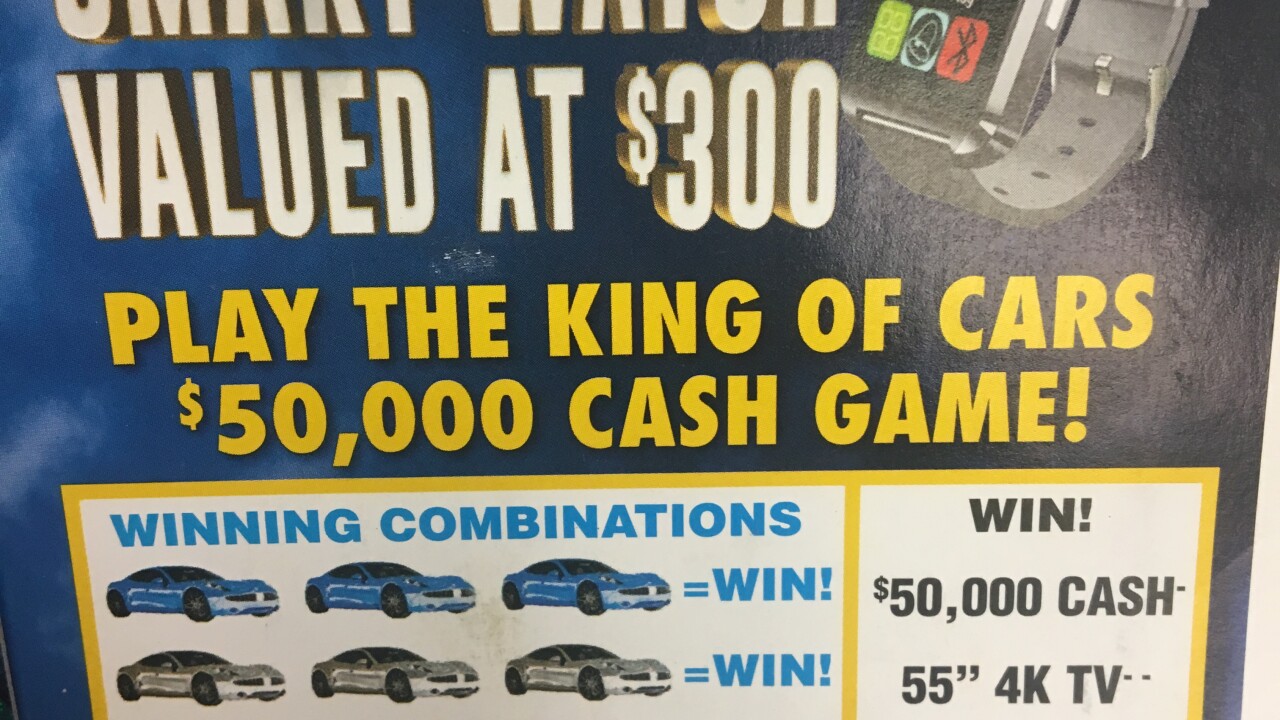 INDIANAPOLIS — A Marion County judge has slapped a Texas-based marketing company with a $140,000 judgment for “deceptive” mailers sent to 70,000 Indiana consumers.

The Indiana Attorney General filed a lawsuit in August against Prophecy Marketing, a company that contracts with Indiana car dealerships for sales promotions.

The lawsuit alleged Prophecy Marketing violated the Indiana Deceptive Consumer Sales Act and the Indiana Promotional Gifts and Contests Act by sending prize mailings which implied recipients won a prize when they did not, as well as misrepresenting the retail value of prizes.

The mailers advertised a sales event and prominently featured a game piece that claimed to determine whether a recipient was the winner of a specific prize such as $50,000 cash, a 55” 4K TV, an Apple iPad or a smart watch.

The mailers contained pull-tabs, and indicated if a recipient matched three silver cars in a row on the game piece, the consumer was the winner of a 55” 4K TV.

However, the game piece had no actual bearing on whether a recipient won a prize, read the lawsuit.

The mailers required “winning” consumers to attend a sales event at a car dealership to claim their prize where they were subjected to a sales pitch attempting to sell them a car.

Brad Gray, owner of Gray Auto in Greenfield, said he hired Prophecy Marketing after the company approached him in 2016.

“They promised more customers would come through the door,” Gray said. “Another dealer in Shelbyville had done it and highly recommended them.”

Prophecy Marketing sent out 35,000 on behalf of Gray Auto, calling the dealer “King of Cars” in their mailers, according to the lawsuit.

Gray said he thought the mailers sent to his customers were misleading.

“I was shocked,” Gray said. “I would think I won a 55-inch TV because all three of those match.”

Of the 544 people who attended the five day sales event in 2016, only one person received a 55” TV, the lawsuit read.

The other 543 customers who attended were informed they won a smart watch, which the ad indicated was valued at $300.

But both Gray and the Attorney General said the watch was valued at less than $20.

“I had two or three customers really upset over it,” Gray said.

Gray said he felt so bad, he went out and bought half a dozen televisions to give away.

“I have done business in this community for years and that’s not how I operate,” he said. “I do consider myself a victim as well.”

Gray said he only used Prophecy Marketing for one sales event, and will never use them again.

“I won’t use any marketing companies anymore,” Gray said. “Probably 80 percent of our business is repeat and referral, and I don’t want my name ruined over something like that.”

Customers who had matching “777” symbols thought they were the winner of $5,000 cash.

“However, the game piece on the Car Center mailing had no actual bearing on whether a recipient won a prize,” read the lawsuit. “Instead a unique ‘confirmation number’ on each Car Center mailing determined whether the recipient had a 1 in 35,000 chance of winning one of the cash prizes.”

Consumers were subjected to a sales pitch and informed they had “won” three $1 U.S. coins, read the lawsuit.

“No recipient was awarded $5,000 cash, despite the representations on the Car Center mailing,” read the lawsuit.

As Call 6 Investigates reported, the Car Center closed its doors in September 2016.

The Indiana Secretary of State’s office later revoked its dealership license for having abandoned its location without filing a ceasing business affidavit.

On Dec. 10, a Marion County Superior Court judge issued a $140,000 judgment against Prophecy Marketing, as well as an injunction ordering them to stop any deceptive mailers.

Prophecy Marketing and its registered agent David Proffitt did not respond to the lawsuit, records show.

Call 6 Investigates was unable to reach Proffitt for comment via email or phone.

A number listed on the company’s website was not working on Jan. 3 and Jan. 7.

Brad Gray said he complied with the Attorney General’s office investigation, and now he wants to warn consumers about suspicious mailers.

You can check out any car dealership in Indiana on the Indiana Secretary of State’s office website: https://myweb.in.gov/SOS/AAOnline/List.aspx?Year=2011

The Federal Trade Commission offered the following tips to protect yourself from prize mailers.

Here are some signs it’s not a legitimate prize:

• You have to attend a sales meeting to win
If you agree to attend, you’re likely to endure a high-pressure sales pitch. In fact, any pressure to “act now” before you miss out on a prize is a sign of a scam.

• You get a call out of the blue, even though you’re on the Do Not Call Registry
Once you register your phone number for free at donotcall.gov, unwanted telemarketing calls should stop within 30 days. Unless the company falls under one of the exemptions, it shouldn’t be calling: it’s illegal.

• You have to pay
Legitimate sweepstakes don’t make you pay a fee or buy something to enter or improve your chances of winning — that includes paying "taxes," "shipping and handling charges," or “processing fees” to get your prize.

• You have to wire money
Don’t do it. Wiring money is like sending cash: once it’s gone, you can’t trace it or get it back. The same goes for sending a check or money order by overnight delivery or courier, or putting money on a prepaid debit card.

• You have to deposit a check they’ve sent to you
When you do, they’ll ask you to wire a portion of the money back. The check will turn out to be a fake, and you will owe the bank any money you withdrew.

• You’re told they’re from the government — or another organization with a name that sounds official
They might say they’re from an agency like the Federal Trade Commission and are informing you that you’ve won a federally supervised lottery or sweepstakes. Or they might use an official-sounding name like “the national consumer protection agency” or the non-existent “National Sweepstakes Bureau.” But they’re imposters.