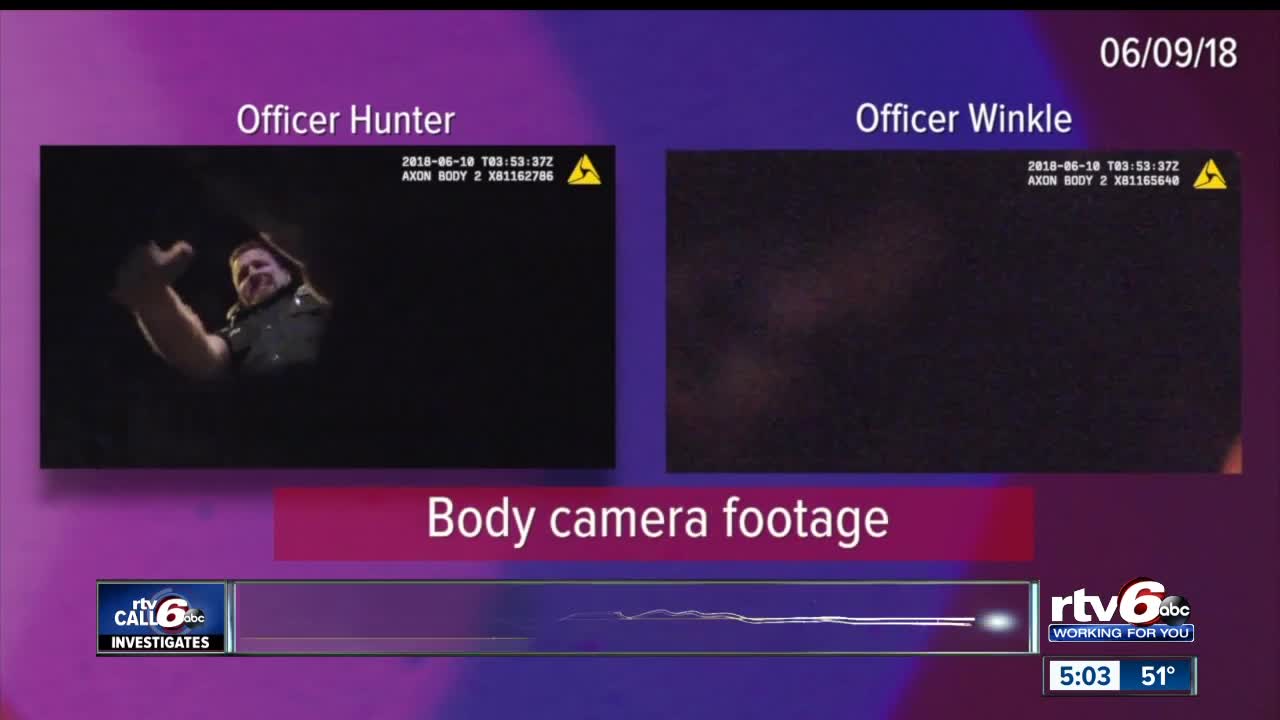 A Delaware County man has filed a federal lawsuit against the City of Muncie and three of its police officers alleging they used excessive force during a June 9, 2018 arrest. 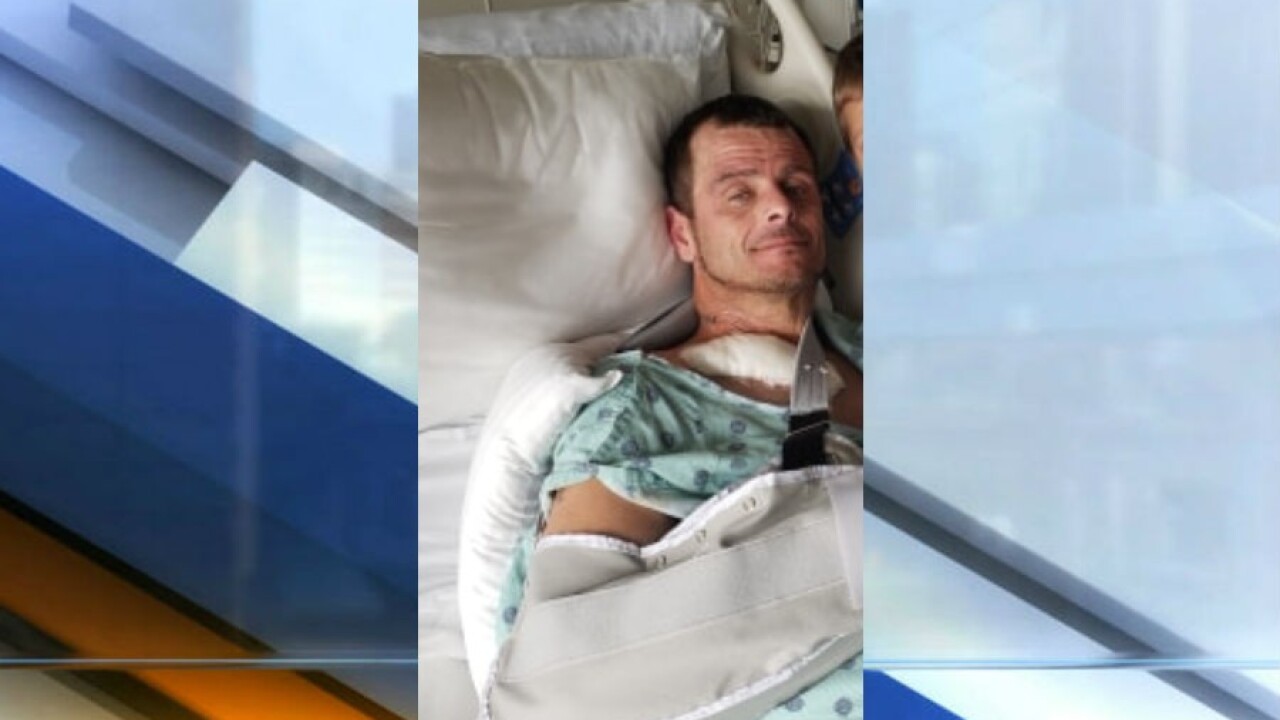 MUNCIE — A Delaware County man has filed a federal lawsuit against the City of Muncie and three of its police officers alleging they used excessive force during a June 9, 2018 arrest.

Jessie Vernon filed the lawsuit on Oct. 22 in federal court, records show, and accuses the officers of battery and false arrest.

Call 6 Investigates showed you the body camera footage of the 2018 incident that began as Muncie Police Officer Chase Hunter found a bag supposedly thrown by Vernon, allegedly with money and drugs inside.

Officer Winkle put the handcuffs on Jessie Vernon while he sat on the curb.

The officers’ body cameras captured Vernon getting to his feet, and then both officers struggled with Vernon before their cameras fell to the ground just seconds later.

The body camera video that recorded was mostly black as you hear Vernon yelling.

According to the federal lawsuit, Officer Winkle “pulled Jessie up by his handcuffs, which caused Jessie to stand up” and Office Winkle “proceeded to throw Jessie to the ground, beat him and repeatedly tased him.

The lawsuit alleges the City of Muncie knew or should have known Officer Winkle was inappropriate to work as a police officer, and “negligently trained and supervised” its officers.

Federal authorities are investigating the Muncie Police Department, according to Chief Joe Winkle.

One of the people they have requested information on is Chase Winkle, the chief's son, Joe Winkle said.

Chase Winkle has recently been serving as the department's public information officer after being transferred from uniform patrol to the investigations division.

Chief Joe Winkle, Chase Winkle’s father, is also listed as a defendant in the lawsuit.

Megan Webb, a friend and co-parent with Jessie Vernon, said Muncie needs to be held accountable.

“Jessie is really a great dad and it makes me so sad to see him be limited with what he can do with our son,” Webb said. “My five year old son is terrified of the police because of this and them coming to my home harassing us and arresting Jessie on false information and warrants.”

This is far more than a broken collarbone. Jessie's collarbone is wedged against carotid artery. The surgeons were reluctant to try to repair the injury because the surgery is so dangerous. However, earlier this year they discovered that the bone laying on his carotid artery has caused dilation in the aortic root of Jessie's heart (which is basically an aneurysm). They did the surgery to repair the injury and it was unsuccessful. A few weeks after the unsuccessful surgery, they had to open the same incision back up and remove all of the hardware because of the dangers of it puncturing a vital organ. That is why Jessie is permanently disfigured now. The doctors feel that it is not repairable now and Jessie will more than likely have this life threatening injury for the rest of his life.

Watch the body camera footage below. Note: The video has graphic language and materials that may be disturbing to some viewers. Viewer discretion is advised.

“Oh my God, please!” yelled Vernon during the incident. “I’m not doing nothing!”

The video showed the officers punching Vernon in an apparent attempt to control the suspect.

The body cameras were still on the ground as the sound of a stun gun can be heard as officers deployed it on the handcuffed Vernon.

More officers arrived on the scene and helped shackle Vernon’s legs and take him to the patrol car.

Five minutes after the altercation began, officers Hunter and Winkle realized their body cameras were on the ground.

“I don’t know which one is which,” one officer said.

Tests revealed Vernon had marijuana, alcohol and methamphetamine in his system, said Winkle.

“He’s high on meth and he’s doing whatever he can not to go back to jail,” Joe Winkle said in a 2018 interview with RTV6. “If Jessie Vernon stays on the ground and doesn’t try to get up and get away, and he’s not biting or hitting, none of those injuries would take place. Once you know he's on meth, it made a lot more sense why he acted like he did."

Joe Winkle pointed out they arrested another suspect at the same time as Vernon, who cooperated with officers and was not injured.

“He never fled, he never tried to get away, he never resisted and of course he never got a scratch on him,” Joe Winkle said during the 2018 interview.

An internal investigation found Officers Winkle and Hunter used an appropriate level of force during the incident.

Joe Winkle said he had no role in the internal investigation.

Vernon issued the following statement to RTV6 when the charges were dropped against him:

I'm just thankful that the prosecutors were honorable people and did what is right. Those officers knew what they did to me was wrong. They knew they were being dishonest and were willing to destroy my future to hide the truth. I paid the ultimate price and still don't understand why. I may never know why they did this to me. I've never been scared of dying until that night. This has changed my entire life. It disabled me for the rest of my life. I can't work. I can't play with my son like I used to. He can't even hug daddy without being scared of hurting me. I've had to have life threatening surgeries that weren't successful. The surgeries basically disfigured me. I still have a very long road ahead of me because of what they did. They need to be held accountable and I am ready to fight for making sure that happens and hopefully prevent this from happening to someone else.

Call 6 Investigates obtained a copy of Muncie’s use of force policy, which states officers can use force when a suspect is handcuffed if the suspect is actively resisting and can’t otherwise be reasonably controlled.

Call 6 Investigates contacted the Muncie Police Department for comment on the federal lawsuit Wednesday, and we are still waiting to hear back.