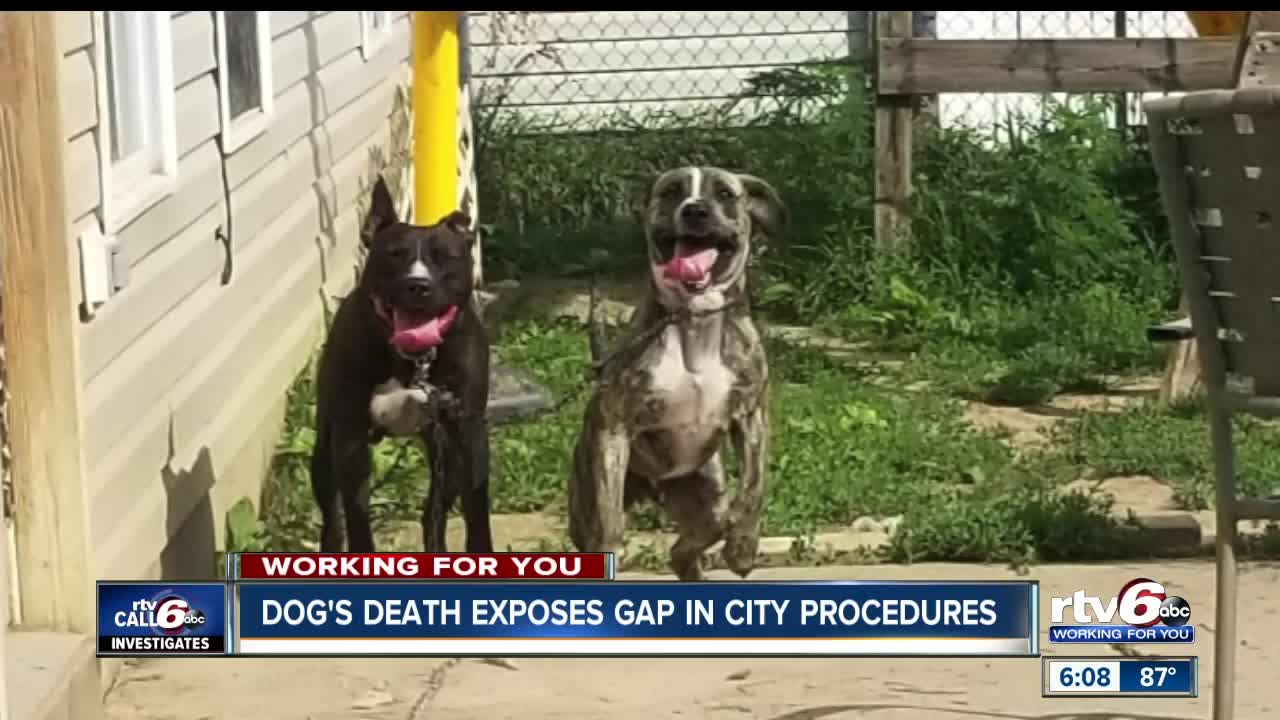 The death of a dog chained up in his own backyard is prompting the City of Indianapolis to change how it handles complaints about animals in distress.

INDIANAPOLIS — The death of a dog chained up in his own backyard is prompting the City of Indianapolis to change how it handles complaints about animals in distress.

Flash, a Pitbull mix adopted from the shelter in October 2018, died on June 27 at a home on Orchestra Way on the city’s west side.

Neighbor Jim Huneycutt called the city numerous times prior to the dog’s death, but no one responded to the home until the pup was already dead.

Huneycutt became concerned when he saw two of his neighbor’s dogs were chained and tangled up outside in the hot sun, and unable to get back inside through their doggy door.

“They’re pretty active dogs, so it’s not a good idea to begin with,” said Huneycutt.

Huneycutt said he talked to his neighbors to no avail, and first called the Mayor’s Action Center about the dogs on June 25, but no one from the city came out. He called again on June 27 around 9:35 a.m.

“There was hardly any wind and the sun was directly above us and no shade, so I felt for them,” said Huneycutt. “They were panting. I was pretty concerned for them."

When Huneycutt checked on the dogs later that morning, at about 11 a.m., Flash was laying down and not moving.

The Huneycutts said he called the Mayor’s Action Center again and messaged their neighbors about Flash’s condition. Huneycutt said he even tried the Request Indy app and the police non-emergency number.

“They just directed me back to the animal control number,” Huneycutt said.

Records show Indianapolis Animal Care Services did not respond to the home until the next day, about 16 hours after Huneycutt called the city to say Flash wasn’t moving.

When the IACS officer arrived, Flash was already dead and had been removed by the owner.

“It’s horrible,” Huneycutt said. “Nobody’s pet should have to go through that. It’s just horrible.”

"It should have never happened,” said Huneycutt. “It was a bad day for my kids and myself, but mostly the dog. You don't want to see an animal go through that."

Call 6 Investigates spoke with Katie Trennepohl, Deputy Director for Indianapolis Animal Care Services, who said they have a backlog of 400 runs.

“Our runs are prioritized by the information we get when the call comes in,” said Trennepohl.

When Huneycutt called the city back on June 27 to say Flash wasn’t moving, the Mayor’s Action Center emailed an IACS supervisor to escalate the complaint.

However, the IACS supervisor didn’t see the email right away.

“By the time she got that email and updated the run to a higher priority, unfortunately the dog had already passed away,” said Trennepohl. “So, we have had conversations with the Mayor's Action Center about how we can address that issue in a more timely manner. "

Call 6 Investigates also contacted the Mayor’s Action Center to find out why the information about Flash’s condition was emailed rather than called into IACS.

“At the time of this case creation, email escalation was the correct protocol agreed upon by ACS,” said Joel Smith, Mayor’s Action Center Administrator. “We are currently working with ACS to open other communication processes for these situations in the future.”

Indianapolis Animal Care Services has added animal control officer positions to cut its backlog in half since last summer.

“We are already getting more officers out on the street and trying to decrease the response times to these runs,” said Trennepohl. “It’s very unfortunate this happened.”

Trennepohl said the agency is “sick” to know this happened to one of their own dogs.

“That’s never the goal when we send an animal home,” said Trennepohl. “We expect them to go to a life-long happy home, and unfortunately that didn’t happen, and it’s devastating for our staff.”

Indianapolis Animal Care Services screens all families who adopt animals and also provides a copy of the city’s Care and Treatment ordinance to all pet owners.

“They’re given a folder of information, and in that folder is all of the ordinances,” said Trennepohl.

The IACS officer told the owner if an animal is tethered, the tether must be 12 feet long and have working swivels on both ends.

“I also told Melinda that Flash’s death was due to her negligence and there was no other excuse,” read the IACS officer’s report.

Melinda Ryan could face a fine of $25-$2,000 per violation, and could lose the other dogs in her custody, depending on what the court decides.

Flash’s owner did not answer the door when we stopped by, but RTV6 could hear dogs barking inside.

Call 6 Investigates left a business card at her door.

“Hopefully this doesn’t happen again,” said Huneycutt. “Whoever is in charge needs to fix something. It’s a big failure all around.”

Here’s what you can do: