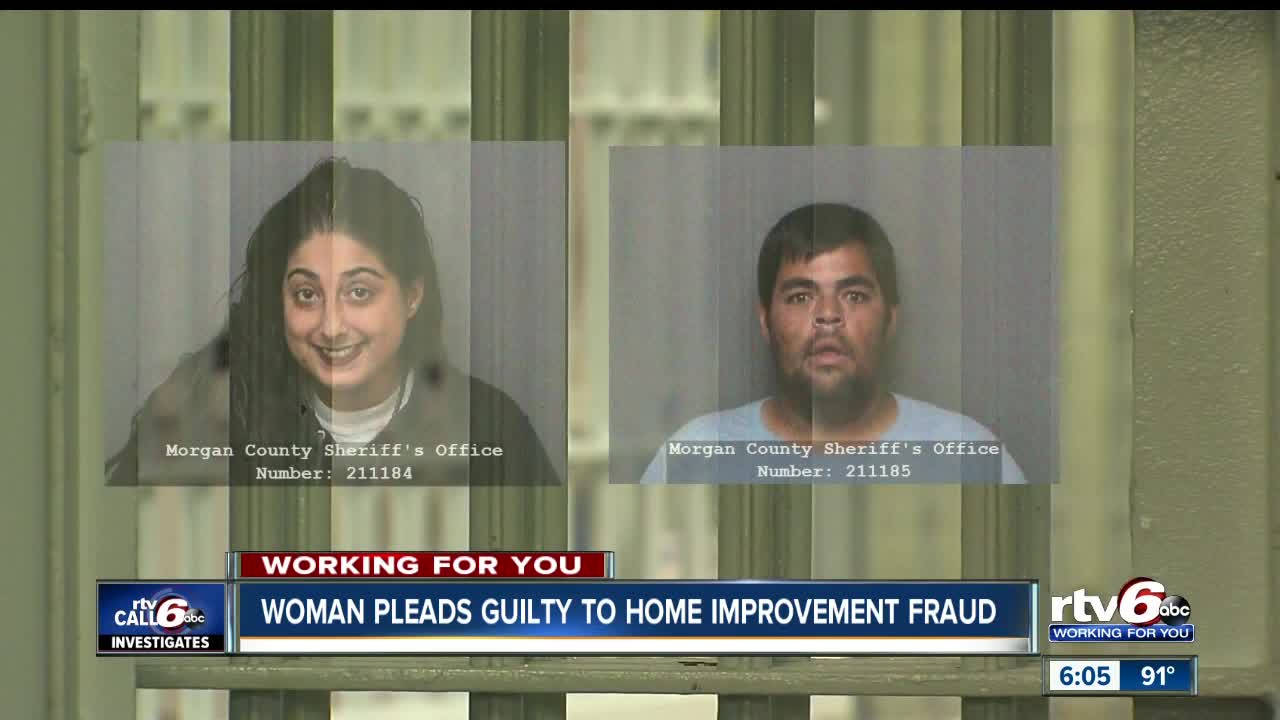 A Greenwood woman pleaded guilty Monday to home improvement fraud and corrupt business influence, both felonies, in connection with a driveway paving operation.

Natalie Davis and Santino Gilk operated a business called “Awesome Asphalt,” records show, and are accused of taking money from consumers and not finishing the job.

Davis will be sentenced on Oct. 15, and faces the possibility of several years in prison, although it appears home detention is more likely in this case.

Davis had no comment to RTV6, but her attorney told the judge Davis plans to repay the $7,500 she owes Megan and Mike Swiergiel of Monrovia.

“We’d like to see justice, some resolution and compensation for the money we are out for them destroying our driveway,” Mike Swiergiel said. “They should go to jail. They took money from us.”

The Swiergiels hired Awesome Asphalt in 2017 and are looking forward to the case being resolved.

“It’s pretty much a nightmare,” Megan Swiergiel said. “We have had nothing done to our driveway besides what we’ve done to make it usable and get access to our property.”

“There’s a no contact order on you, mam,” Gilk told Kenney. “You’re committing a felony right now. Don’t you respect the law at all?”

Kenney responded that she had no received any paperwork about a no contact order.

“Would you like to come to my house and have me show you the no contact order and I’ll call the police and they’ll be waiting to arrest you?” Gilk told Call 6 Investigates Kara Kenney.

Shortly after the exchange, Natalie Davis signed the plea agreement.

The plea says Davis is not supposed to contact the Swiergiels or Kara Kenney, however, the judge said that wouldn’t take effect until sentencing.

There was never a no contact in order in place that prevented Call 6 Investigates Kara Kenney from asking Davis and Gilk questions in the courthouse.

Gilk’s pretrial hearing was rescheduled, and will be set for a guilty plea hearing, records show.

The Swiergiels want to see Davis and Gilk behind bars and for them not to do driveway paving work again.

“We want them to be known so they can’t take money from other hard working families,” Mike Swiergiel said.

Records show a business owner in Speedway filed a lawsuit, alleging the driveway contractor took his money and failed to do the work, damaging his property in the process.

The Speedway business owner received an $8,000 judgment in a Marion County small claims court against the contractor.

The Swiergiels filed a police report, and to their surprise, Indiana State Police investigated.

“Someone finally listened,” Mike Swiergiel said. “Somebody finally did something about it.”