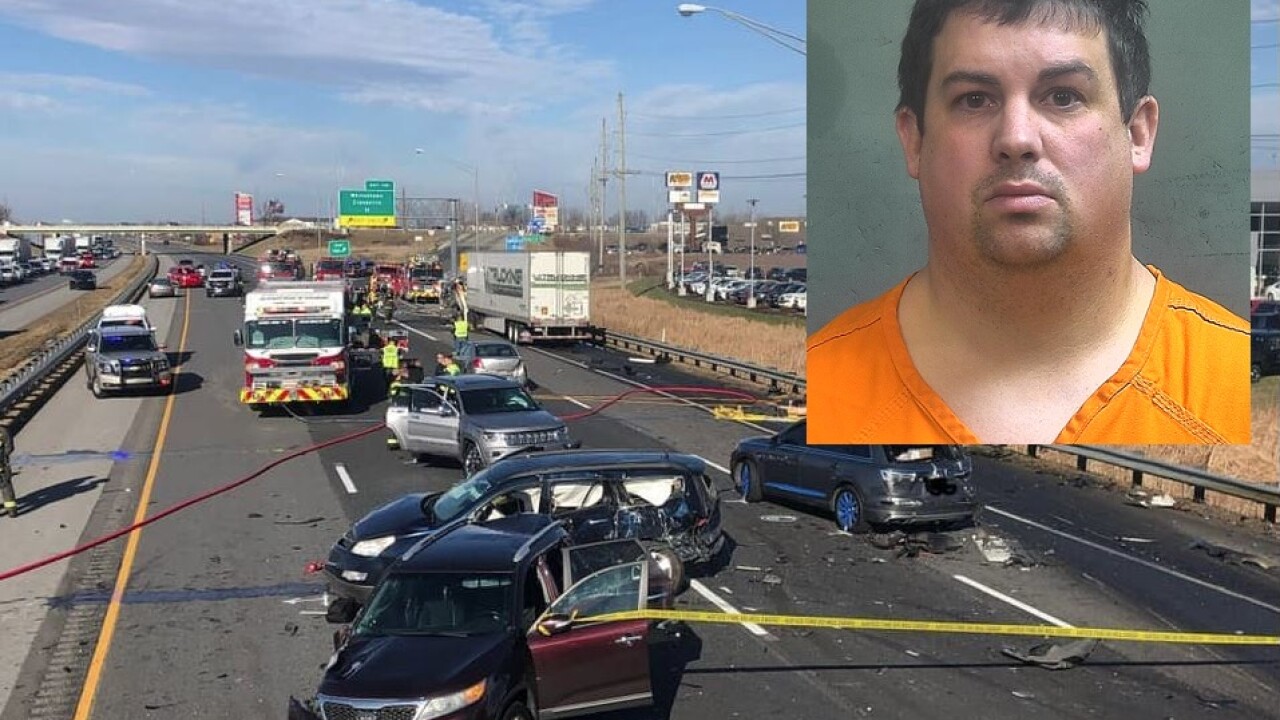 Matthew Lewis Small, 34, of Grandville, Mich., has been charged in connection with a crash on Interstate 65 on Sunday, Jan. 5, 2020, that killed three people.

INDIANAPOLIS — A former co-worker of Matthew Small, a semi-truck driver accused of causing a deadly crash on Interstate 65, says she was concerned about his driving habits and tried to warn supervisors.

Robin Michelin, an over the road truck driver of 20 years, said she worked with Small at Grand Rapids, Mich. company MNST LLC.

Michelin said Small started with the company in the spring of 2019.

“He was damaging our equipment,” Michelin said. “He flattened two sets of tires, which could mean he was following too close and locked up his brakes.”

As Call 6 Investigates reported, in May 2019, Small was cited for speeding in a commercial vehicle while in Ohio, according to his driving record.

Small also received an infraction in Carmel on July 8, 2019 for following too closely in a truck.

According to the USDOT number on the Carmel traffic ticket, Small was working for MNST at the time he was caught following too closely.

Michelin said Small was working for MNST when he received both of those violations, and she raised concerns to management.

“When we get drivers in here who don’t care how they drive or how they treat the equipment, we don’t need people like this driving for this company,” Michelin said.

Michelin said at the time, the company was just starting out and had a small number of employees.

“When he’s damaging equipment that we are actually renting, we told our boss to get rid of him,” Michelin said.

Call 6 Investigates was unable to reach MNST management for comment, and Small declined to speak with RTV6.

Small went on to work for VL Trucking based out of Dubuque, Iowa.

Small is charged with three counts of reckless homicide for the Whitestown crash that left a couple and a baby dead.

His trial is scheduled for April 21.

Small has also been cited for his driving several times in Michigan, records show.

In 2002, Small was convicted of reckless driving in Branch County and received a $325 fine and six months of probation.

In 2004, he was cited for driving on a suspended licensed in Branch County and pleaded no contest, and was sentenced to a $200 fine.

Both the 2002 and 2004 incidents involved Small driving a passenger vehicle, according to the Branch County court.

In 2013, Small was involved in a crash in a passenger car and was cited for failing to stop within assured clear distance, according to Small’s Michigan driving record.

Also in 2013, he received a speeding violation for going 45 mph in a 35 mph zone in a car, Michigan records show.

In 2014, Small received a driver improvement letter from the state of Michigan, which is correspondence that warns drivers of unsafe driving habits.

Also in 2014, Small was cited for failing to stop while leaving an alley or private drive while driving a pickup truck, records show.

In 2015, Small was cited for speeding in Michigan after he was involved in a crash in a passenger car.

In 2017, Small was ticketed for speeding in the Grand Rapids area in a passenger vehicle.

In May 2019, Small was cited for speeding in a commercial vehicle while in Ohio, according to his driving record.

Small asked the Boone County Sheriff's Office to release the note in the image below:

Small told police he was driving northbound on I-65 near the 129 mile marker and looked away from the road to set his coffee mug down when he ran into slowing traffic, according to a release from the Boone County Sheriff's Office. Authorities believe Small collided with eight vehicles as he drove through the back-up.

The sheriff's office said 14 other people suffered non-life threatening injuries. Thirteen people were transported to St. Vincent's Hospital and a girl was taken to Riley Hospital for Children.