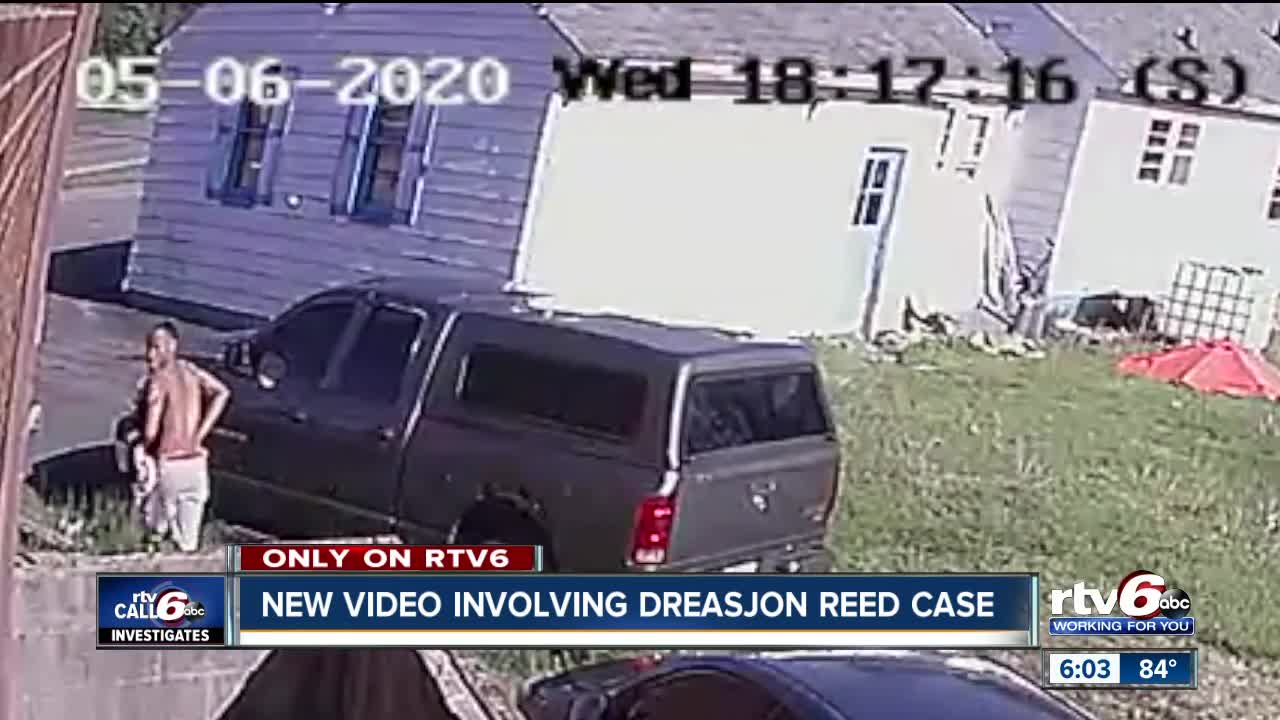 INDIANAPOLIS — Dreasjon Reed's family and their legal team claim newly released surveillance video from the day of the shooting proves that the 21-year-old could not have fired at IMPD because his hands were full.

"There was no way he could have turned around and taken two shots at the police officer," said Swaray Conteh, the family's attorney. "Even when you look at the video that's out there, they were not too far from each other. He's a trained soldier. If he had shot him, he would have gotten him"

"How in the world could you shoot if you had a t-shirt in one hand and a phone in the other," Reed's mother, Demetree Wynn told Rafael Sanchez.

Reed was being chased by IMPD on May 6 when he began streaming on Facebook Live. The chase ended when Reed stopped the car he was driving in a lot behind the Ace Lock & Key building near 62nd Street.

That Facebook Live video was still rolling as Reed is seen jumping out of the car and then running from police from a nearby surveillance camera.

Officer De'Joure Mercer, who has been identified by IMPD as the officer involved in the shooting, can be seen chasing after Reed just moments later.

We are not showing Officer Mercer's face, because although IMPD has released his name, they have not released the officer's photo to the public.

Closeup surveillance video from the day of the Dreasjon Reed shooting

The newly released 24 seconds of surveillance video shown above has sparked many questions.

In the spirit of transparency, we are sharing our reporting process and what we do and don't know about that video.

WRTV has reviewed the surveillance video multiple times. Using our technology we have slowed down, enhanced and viewed the footage frame-by-frame.

What we can report is what we see in Reed's hands after we enhanced the video. Looking closely, you can see a t-shirt in Reed's left and what appears to be two cell phones in his right hand.

Surveillance video from Dreasjon Reed shooting with closeup on hands

We know that at least one cell phone is in his hand, because when the surveillance video is synced with his Facebook Live stream — as seen below — you can see the sky, the ground and the individual as he runs from the police.

During the Facebook Live stream that Reed was airing from the car, you can see what appears to be a weapon tucked into his waistband. (screenshot below)

Although the gun has not been identified by police, the markings are similar to a weapon Reed was seen posing with during multiple videos that were posted to his personal social media page, including the screenshot below which was taken from a video posted to his Facebook page on February 23, 2020.

The newly released surveillance video does not show a clear enough picture to prove whether that weapon was in Reed's possession as he exited the car and ran. The video also does not show what happened after Reed and Officer Mercer leave camera range.

For that reason, we are also sharing the Indianapolis Metropolitan Police Department report that states Reed fired at them twice and that a weapon was found near his body.

Lawyers for the Reed family claim they have not yet seen that evidence and they have witnesses who fill in what happened during the encounter between Reed and Officer Mercer. Those witness accounts have not been made public.

IMPD and the Special Prosecutor both received detailed emails from WRTV on Tuesday, June 16 before 3 p.m. explaining in writing the video and interviews that we had and what we planned on reporting. Both are not commenting based on the ongoing investigation.

The Reed family’s legal team has not shied away from the fact that Reed has a criminal history. Reed had a previous traffic stop out of Marion County from September, and multiple videos on his social media account show him handling a weapon. But the legal team says that has nothing to do with why Reed was killed by police.

"We know he was murdered, we are trying to find if it was a justified murder or unjustified murder," said Fatima Johnson, the family's other attorney. "There is nothing I have seen that will tell me that the police had a right to take his life."