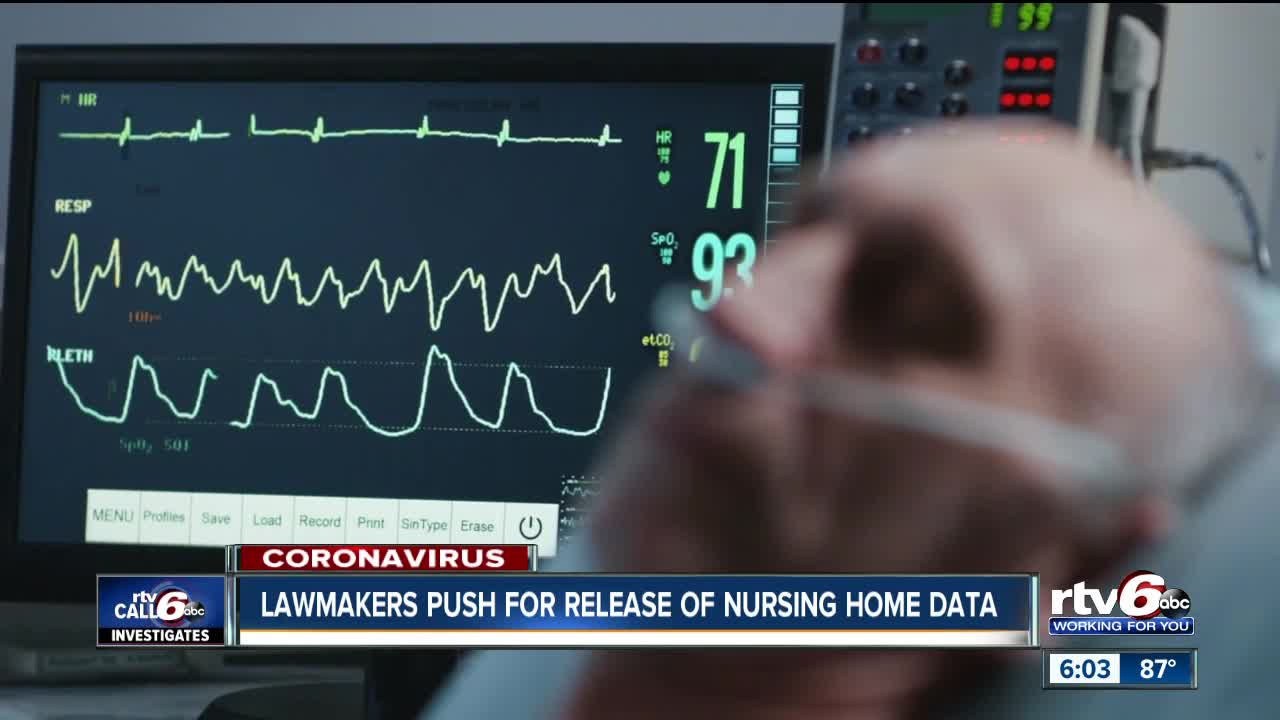 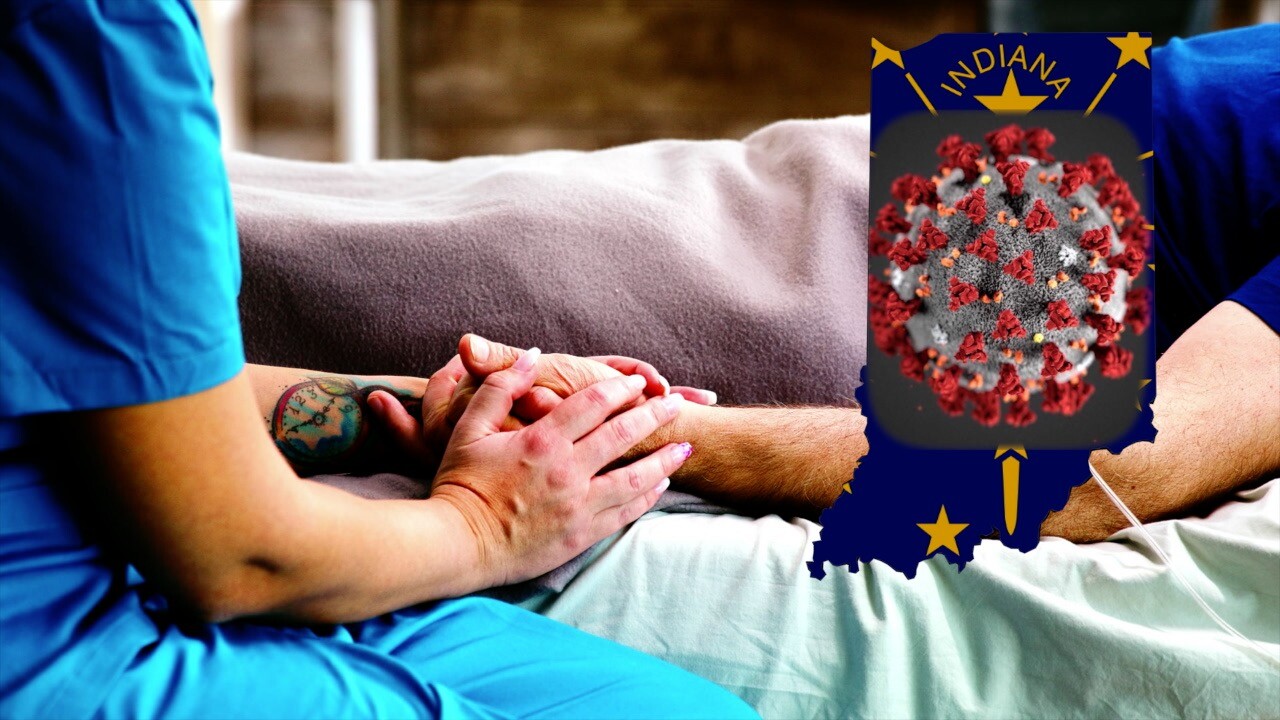 INDIANAPOLIS — A group of lawmakers is now calling on Governor Eric Holcomb and the Indiana State Department of Health to collect and make public nursing home COVID-19 death and case information.

“We write to you with deep concerns regarding the State Department of Health's refusal to collect and report COVID-19 data for individual long-term health facilities,” read the letter. “Lawmakers, advocates and families have asked the department to release this data so that Hoosiers can better know where outbreaks are occurring and know if their loved ones are at risk. Taxpayers have not been privy to this information since the COVID-19 pandemic began."

The letter comes just days after Call 6 Investigates reported ISDH claims it does not have nursing home documents that contain COVID-19 death and case information.

The group of senators is considering legislation to address the issue.

“If ISDH will not report these numbers, then we will draft and file legislation at the earliest possible time to make such compliance with basic transparency a part of state statute,” read the letter.

Since mid-April, Call 6 Investigates has requested the state provide data showing where people are dying in Indiana nursing homes and where the COVID-19 outbreaks are happening.

“I wanted to thank you for putting the spotlight on this,” said Breaux. “This is an area where many people are concerned. You're just bringing to the forefront what a lot of families are feeling but don't have a voice."

Nursing homes are largely funded with tax dollars through Medicare and Medicaid.

Sen. Eddie Melton pointed out as the state gets more federal funds to help with COVID-19, they could use the nursing home data to make decisions.

"We want to make sure that all of these resources are allocated at the appropriate locations and facilities in our communities that are most impacted,” said Melton.

Lawmakers also questioned how the state can track and publish COVID-19 by zip code and other demographics, but not by nursing home facility.

"I'm not sure where this disconnection is coming from," said Breaux.

The state denied those requests, citing “privacy reasons,” even though RTV6 has never asked for patient information. On May 4, Call 6 Investigates Kara Kenney filed a formal complaint against the state with the Indiana Public Access Counselor Luke Britt.

In a written response to the Public Access Counselor provided to RTV6 this week, an attorney for the Indiana State Department of Health emphasized the agency is providing only aggregate totals, which only show the overall number of people who have died at Indiana nursing homes and long-term care facilities.

“In sum, ISDH does not have the records requested,” read ISDH’s response. “Moreover, Indiana law does not require ISDH to create records to fulfill these requests.”

ISDH claims its computer program does not generate a report with running totals for each facility for either COVID-positive cases or deaths.

“To generate a list of all facilities with their cumulative case and death counts would require an ISDH employee to create a new record by manually analyzing information in the reporting system and to continually analyze it to keep it updated,” read the ISDH response.

“These requests have been denied by your administration based on alleged privacy reasons,” read the senators letter. “However, we have learned from a recent report that the state is now claiming this data has not even been collected by the Department of Health. Why has ISDH hidden behind patient confidentiality for multiple months when in fact the department had not even collected the data in the first place?”

Senators Mrvan, Breaux and Melton are urging the Governor’s office and ISDH to take collect and publish the data.

“Contrary to guarantees made by you and ISDH staff during weekly updates, not all long-term care facilities have been forthcoming with COVID-19 information,” read the letter. “Multiple families are sharing stories of not being notified by facilities when loved ones contract the disease. The lack of information and the mixed messages coming from your administration are unacceptable, particularly when lives are at stake.”

RTV6 reached out to the Governor’s office for a response to the letter.

“We respectfully do not understand why Indiana is unable to collect this information and share it without violating privacy concerns,” read the letter. “In fact, 30 other states have found a way to report numbers on an individual county or facility level, including some of our own neighboring states. Indiana has the ability to do the same, and Hoosier families are counting on the state to lead during this health crisis.”

RTV6 spoke with members of the Indiana House who agree.

"That's absurd in this day and age when we can track everything with data, we can have those numbers updated, we should be able to do that for our citizens," said Rep. Chris Chyung, D-Dyer.

"We can definitely put in legislation that the state have to release the names of those facilities whenever there's a pandemic, but that won't occur until January,” said Rep. Robin Shackleford, D-Indianapolis. “Even if we did an emergency bill that still wouldn't take place until January."

Lawmakers are urging the Governor and ISDH to take action.

“It’s very frustrating,” said Shackleford. “Since we’re not in session, we need to the Governor and Dr. Box to act now.”

The state will not compile the data, so RTV6 is gathering positive cases and deaths for facilities and county health departments that are releasing the data.

You can see the full list of nursing home COVID-19 data compiled by the RTV6 team in the document below. This list will be continuously updated as new numbers are provided