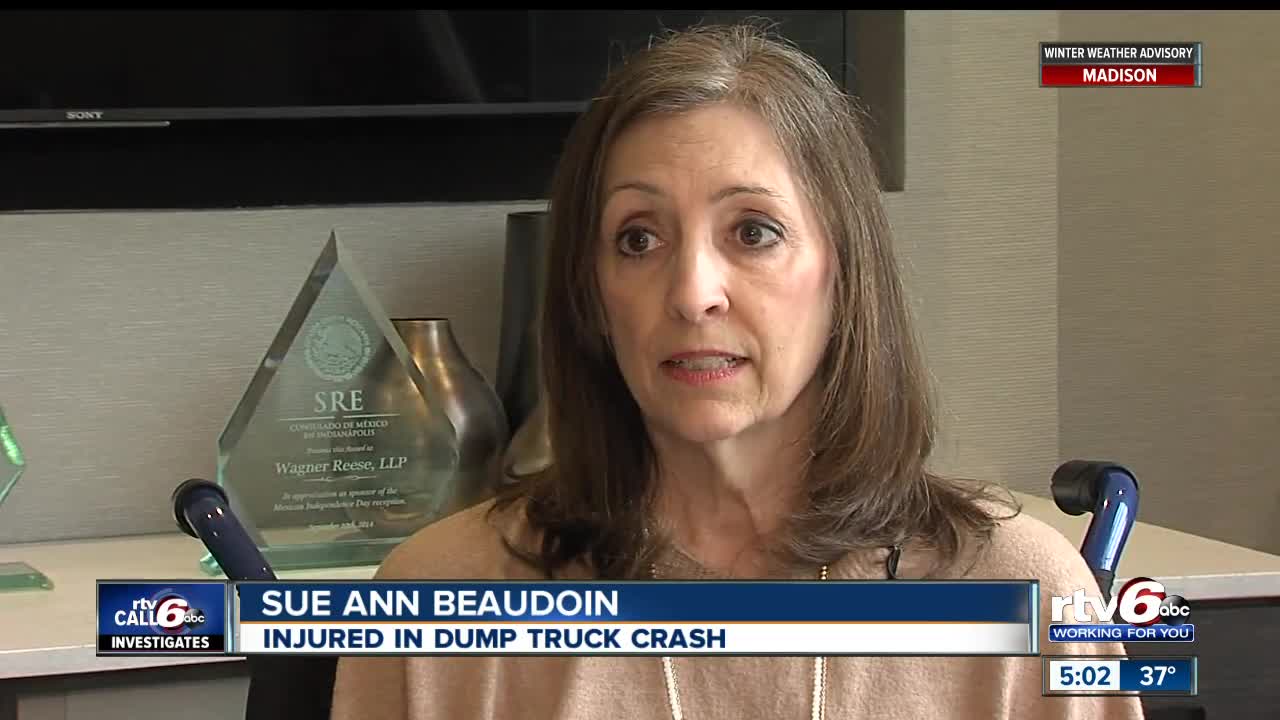 An Indianapolis woman has filed a lawsuit against a truck driver and his former employer after a dump truck crash left her paralyzed from the waist down.

AVON — An Indianapolis woman has filed a lawsuit against a truck driver and his former employer after a dump truck crash left her paralyzed from the waist down.

Sue Ann Beaudoin filed the lawsuit against Danny Williams and North American Environmental Services based out of Zionsville, alleging they were both negligent.

Beaudoin was stopped for a red light at Rockville Road in Avon on September 3.

"All of a sudden, I saw this dump truck barreling down the road behind me," said Beaudoin. "I just thought, 'I hope he can stop.' I realized he was not going to stop."

Danny Williams was behind the wheel of the dump truck, court records show, and he told police he'd been snorting heroin.

"I woke up with a man by my side, and he said, 'you have a lot of angels around here because you shouldn't be here,'" said Beaudoin.

The crash killed Gerald and Rhonda Legan and left Beaudoin a person with paraplegia.

"In just moments, my life was in shambles," said Beaudoin. "My hopes and dreams for the future are gone. I can't drive. I can't work. "

Beaudoin is used to an active lifestyle full of working, traveling, cooking, and visiting with her family.

The 65-year-old now relies on around the clock nursing care, and her medical bills are mounting.

"In the blink of an eye, your life can change," said Beaudoin. "I have a three-story townhouse, and I have to live in 150 square feet of it."

The lawsuit alleges Williams' dump truck was "underinsured" and that the company negligently hired and supervised Williams.

Williams failed to operate his commercial motor vehicle with reasonable care, was intoxicated and impaired at the time of the crash, and failed to pay proper attention to the roadway, the lawsuit alleges.

As Call 6 Investigates has reported, Williams has at least 25 traffic violations on his driving record, including operating while intoxicated, speeding, seat belt violations, and disregarding traffic signals.

“Society needs to be protected by people like that,” said Beaudoin.

Beaudoin feels lucky to be alive despite her challenges.

“I’d like to travel someday, and I had a trip planned I had to cancel,” said Beaudoin. “I was going to Italy to have cooking lessons and learn about wine. It’s still on (my bucket list.)”

Call 6 Investigates reached out to Danny Williams for comment, as well as North American Environmental Services.

The trucking company’s registered agent, Robert Thomas, declined to comment on the lawsuit and said Williams is no longer working there.

Continental Insurance Company is also named in the lawsuit, and their attorney declined to comment.

Williams and North American Environmental Services are facing several other lawsuits related to the September 3 crash, including a wrongful death lawsuit filed on behalf of the estate of the Legans.

Williams is facing seven criminal charges from the crash, and his trial is scheduled for March 18.