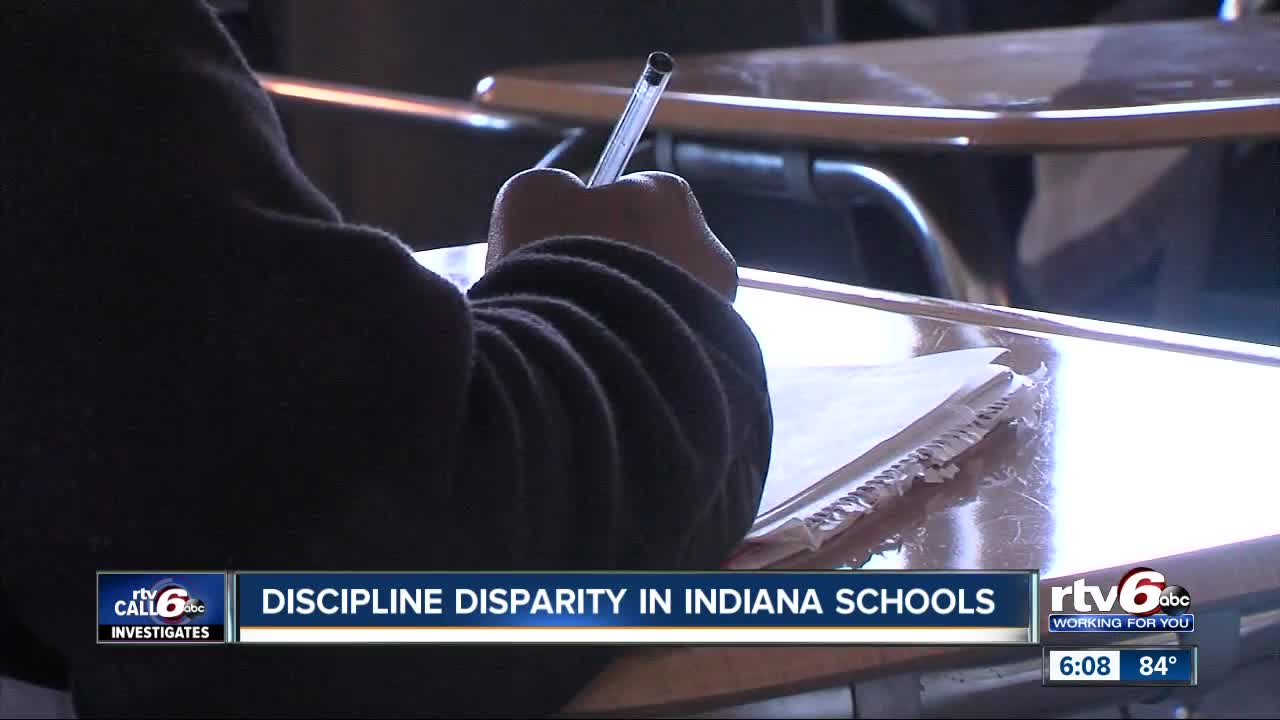 Call 6 Investigates Kara Kenney spent months digging through federal and state data and found all black students in Indiana are more likely to be disciplined and arrested than students of other races.

Indiana also ranks 4th highest in the country when it comes to the rate of out-of-school suspensions for black teens in middle and high school, according to the Center for Civil Rights Remedies at UCLA.

24% or nearly a quarter of black middle and high school students in Indiana have been suspended at least once.

Nicole Kenney’s teenage son, William, got a 10-day suspension after William and his brother say they stood up to a bully.

"When I got suspended for two weeks I was like, dang, I'm not going to be in school and I'm going to be missing out on a lot of work," William said. “When we get in trouble, it’s a bigger consequence.”

William said the bully, who is white, got a three-day suspension.

This School-to-Prison Pipeline in Indiana study shows students who get in trouble in school are more likely to get arrested by police and go to jail or prison.

The Positive School Discipline Institute is working to stop that cycle.

PREVIOUS | Schools get training on different approach to student discipline

"We're trying to get to the relationship between the educator and the student so we can keep kids engaged in school and on the right track and reduce suspensions, because we know when they're put outside of the school community we know they are at much greater risk for encountering law enforcement," JauNae Hanger, with the Children’s Policy and Law Initiative of Indiana and the Positive School Discipline Institute, said.

The discipline disparity is happening with student arrests as well.

State data shows black students make up 12% of the state’s student population, yet comprise 26% of arrests on school property.

The Positive School Discipline Institute trains school leaders, teachers, school police and other staff about cultural differences, the role of trauma in a children’s behavior, and implicit bias — which are the unconscious views we have about certain groups of people.

“It's more than implicit bias. It's unconscious racism," Gwen Kelley, with the Children’s Policy and Law Initiative of Indiana and the Positive School Discipline Institute, said. “How do we deescalate situations? It doesn't happen without training because your automatic instinct is to say I'm not going to tolerate that on my watch."

Schools are not required to do implicit bias training, and some school leaders feel it’s a huge time commitment for their staff.

"Yes we think it should be required," Kelley said.

Call 6 Investigates checked with the Indiana State Department of Education to see what the agency is doing with regards to training.

The Comprehensive Positive School Discipline Guide was released includes implicit bias and restorative practices. IDOE is also partnering with the state’s Division of Mental Health and Addiction to provide Peace Learning Center trainings regionally at no cost to the schools.

“This fall starts with the southern region and then we will bring on the other two regions,” Adam Baker, IDOE spokesperson, said. “We should have 30 school districts trained in positive school discipline, including implicit bias.”

"We need all these players to come together and change the policies and practices systemically in their school,” Hanger said. “That's a big ask. But that's what we're asking our law enforcement to do."

With an unprecedented amount of attention on racial injustice, they’re hoping to see more attention on the topic in schools.

“When you start talking about race, people think well you’re calling me a racist — no,” Kelley said. “We’re talking about issues that are real. It takes courage to talk about racism.”

“We know what the solutions are, we just have to be brave enough to say that it’s important enough for us to do it,” Hanger said.