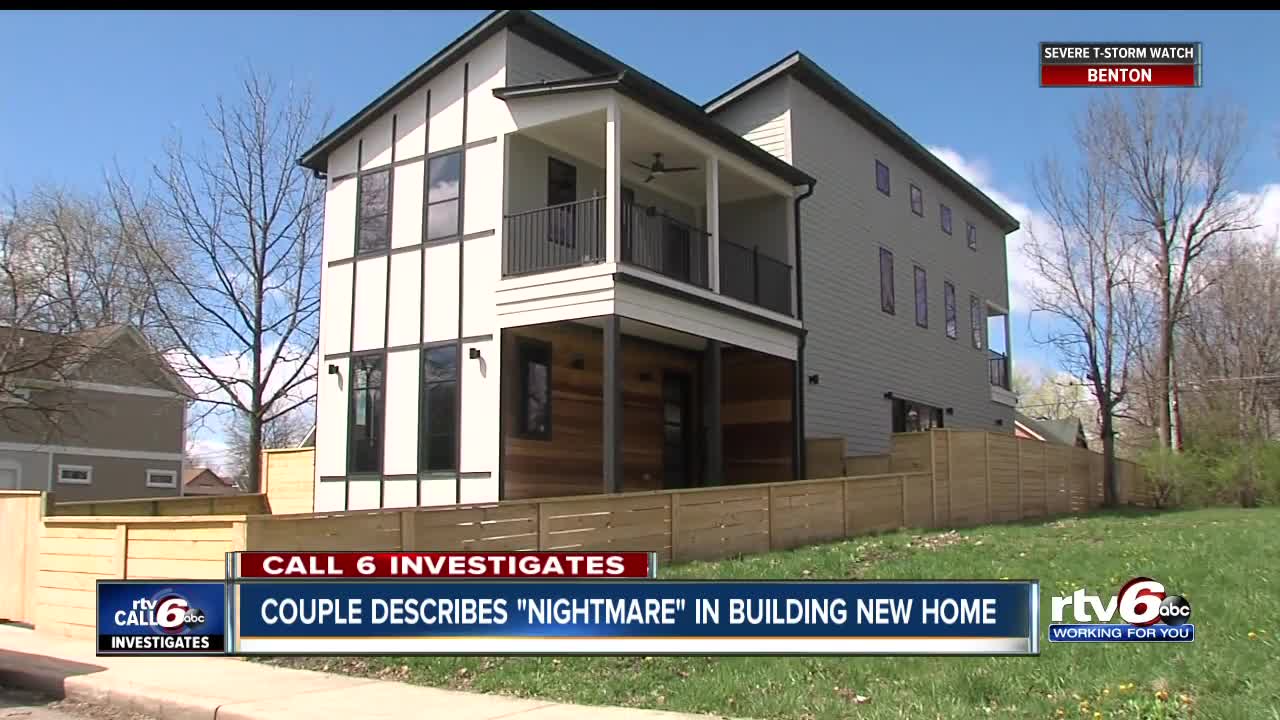 A family's new home is unhealthy and not up-to-code.

INDIANAPOLIS — An Indianapolis family thought they were building their dream home, but instead ended up with what they call a “nightmare.”

Arin and Tony Lindauer moved into their home in November of 2018, and two months later learned the home had serious structural problems and safety hazards. Call 6 Investigates has been digging into what happened and found the safeguards the Lindauers thought were in place were not actually there to protect them.

'We thought it was the perfect scenario'

Arin and Tony Lindauer have two young children. When Arin was pregnant with their youngest, the couple started looking for their forever home.

They fell in love with pictures of a home located at 2030 Bellefontaine in the Kennedy-King neighborhood of Indianapolis. The builder, Blue Ridge Homes, had already begun construction on the home.

"We were having a baby and it would be done a month after the baby was born,” said Arin Lindauer. “We thought it was the perfect scenario."

The Lindauers moved into the home on November 27, 2018 and the couple says the problems started two months later in January 2019.

“Our walls in our master bedroom were crying, literally, it was just weeping water down our walls,” said Arin. “This is two months into owning this house.”

Concerned, the Lindauers hired an independent inspector, Dan Katz of TrustPoint Inspections, who issued a 243-page report. The findings include structural problems with walls, unsanitary conditions with the sewage system setup, inadequate insulation, and a water heater improperly connected to the furnace exhaust that could lead to poisonous gasses getting into the house.

"We have carbon monoxide detectors everywhere, and I'm freaked out that could kill us at night in our sleep," said Arin.

The inspector also found the deck is not properly supported and the guardrails are not attached well—a problem that could lead to “serious injury or death,” according to the inspection report.

The roof rafters were not properly installed, which reduces the home’s ability to resist snow and wind loads and “may ultimately lead to failure, which is a potentially dangerous event.”

Other concerns noted in the report include a handrail that did not extend the full length of the stairs, a potential fall hazard, and the clothes dryer was not properly wired which is an electrical shock hazard.

“I don’t even feel safe turning on our dryer,” said Arin. “In the back of my mind, I say a prayer every time I turn the dryer on.”

The Lindauer family thought they did things right. Before they bought, they looked at other homes by the same builder.

“We went over to Fountain Square and went through multiple homes that they were building that were identical, but a few changes, so we felt pretty confident about the finished product and the way it looked,” Arin said.

The couple also got a warranty for the home. However, they later learned for the first two years the builder, not the warranty company, is responsible for addressing any defects caused by faulty workmanship or defective materials. The Lindauers said they notified the builder of the 243-page inspection report, but do not trust the company to fix the problems.

“It’s been a nightmare to say the least,” Arin said. “It has taken everything I’ve ever dreamed about and just crushed it. I don’t want to live in this house anymore.”

The couple can’t sell the home to another family with its structural issues, and they don’t have extra money to fix the problems themselves or rent another place.

“We don’t have anywhere to go,” said Arin. “We don’t have extra cash to go rent a three bedroom somewhere on top of paying this mortgage.”

The city issued dozens of code violations for the Bellefontaine home after the Lindauers were already living there, including deck guardrails not installed properly and a water heater vent incorrectly connected.

Unlike many other communities, the City of Indianapolis does not issue a certificate of occupancy—a document from a city saying the building is safe to live in.

“I don’t know how we bought this house,” said Tony Lindauer. “No one is going to protect you.”

How was this able to happen?

Call 6 Investigates asked the City of Indianapolis how the Lindauers were able to move into a home that had not received its final inspection.

Pahl also said the city followed all inspection procedures as set forth in city-county code.

When Call 6 Investigates asked what the city has in place to protect homeowners from moving into a property that is unsafe, Pahl said city ordinance requires contractors to be licensed, bonded and insured.

“There are also ordinance requirements for when someone needs to obtain a building permit, as well as when a building inspection must be scheduled,” said Pahl.

Call 6 Investigates stopped by the address listed for Blue Ridge Homes, which is a residential address in Franklin Township, and left a business card for Roger Watson.

“Although the design and construction of the Lindauer home was initially approved by all applicable agencies of the City of Indianapolis, we acknowledge that the Lindauers were affected by other issues with the home. In good faith, we have mutually agreed to buy back the home to minimize the inconvenience to the Lindauer family during repairs. While recognizing that new home construction is not a perfect science, and that sometimes things don’t go as planned, we nonetheless stand behind our work and support our customers in a fair and compassionate way. We’ve tried hard to do so here."

The Lindauers said they signed an agreement on May 10 to sell back the home and close by June 14 and move out by August 1.

“They can take it back, do what they need to do, and get it re-sold, but for us we just need to get out,” said Arin.

The Lindauers are not alone in their desire for a brand new home. The new home building market is strong right now, with neighborhoods under construction across Central Indiana.

Jerrod Klein, VP of Sales and Marketing for Davis Homes and a member of the board of directors at BAGI (Builders Association of Greater Indianapolis), says Indianapolis is seeing "tremendous growth" in new home building. "Consumer confidence is strong and interest rates are still very, very good," Klein said.

To help protect against issues like the ones the Lendauers face, Klein recommends having a contract with the builder.

"If you have it all in writing, you can always go back to the paperwork,” said Klein. “There should never be oral agreements. It should be in writing to eliminate confusion."

MORE | How to protect yourself when building a new home

The Lindauers want other families to hear their story and learn from it.

“If you’re building a home, hire an inspector,” said Arin. “That would have saved us. Secondly, if your gut is telling you it’s not right—just get out.”

SEE | Find a Home inspector Near You

According to the City of Indianapolis, as of May 13, none of the 25 code violations have been fixed at the Bellefontaine home and Roger Watson currently has two open violation cases.

Currently, the city is not taking any additional enforcement action against the builder since the Lindauers are not allowing the contractor into the home.

The account is currently “on hold” at the city, which means, until Watson or someone else pays the fees, they will remain in collections and all activity associated with his licenses freezes, including no permits will be issued.

Pahl said Watson could not pull a permit without also supplying the company license number, so it effectively puts a hold on the company and all agents.