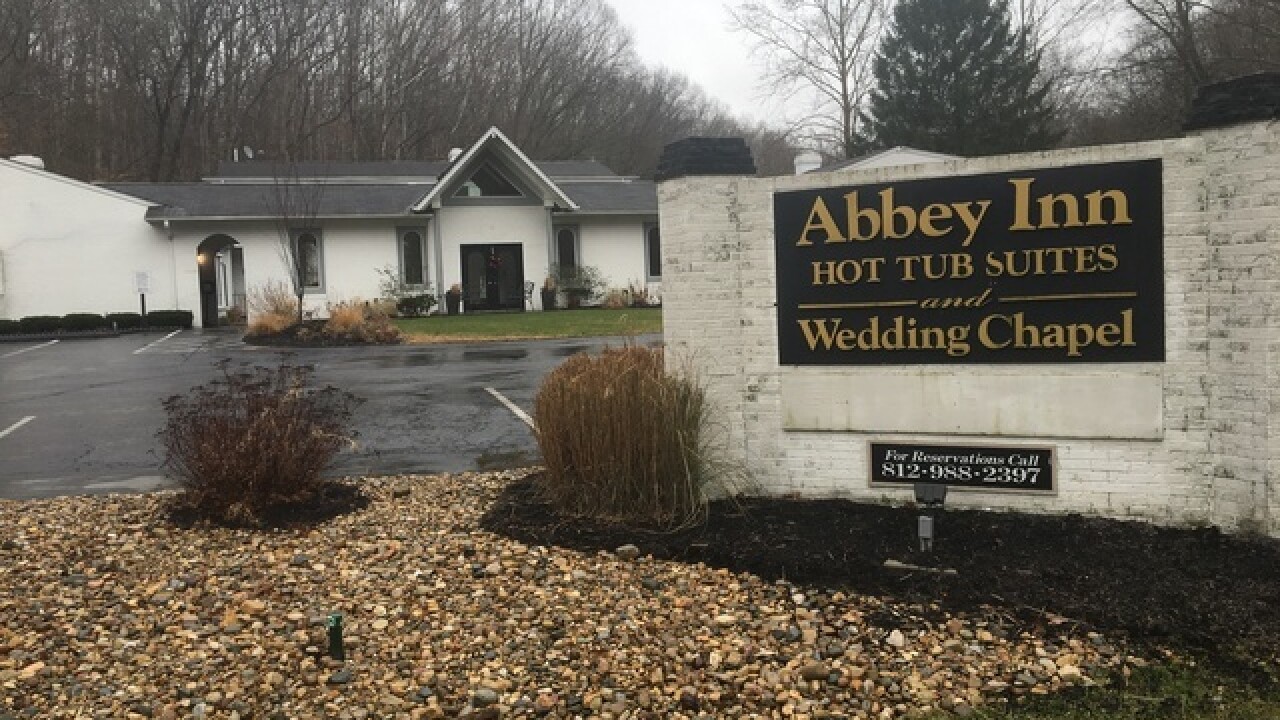 JENNINGS COUNTY, Ind.—  A special judge held a hearing Thursday in the battle between a Brown County hotel’s former operator and the Indiana Attorney General’s office.

The policy allowed the Abbey Inn to charge customers for writing negative reviews, according to the Attorney General.

Andrew Szakaly, the former operator of Abbey Inn and president of Abbey Management, filed a motion to dismiss in Brown County Circuit Court on January 2.

Szakaly is a former Brown County chief deputy prosecutor, so a special judge out of Jennings County was appointed in the case.

Thursday, Judge Webster said he would take Szakaly’s motion to dismiss matter under advisement and will issue a decision in the next week or so.

In that motion, Szakaly criticized the customer who complained to the Attorney General, saying she suffers from “a substantial credibility problem.”

The Attorney General’s lawsuit stems from a consumer complaint from Greene County resident Katrina Arthur, who said she was charged $350 after leaving a negative review.

In court documents filed January 2, Szakaly said Arthur “has trouble telling the truth and paying her bills” and pointed to Arthur’s financial problems, including judgments and personal bankruptcy.

“She has left local small businesses holding the bag for $4,596.52 in unpaid bills resulting in 5 different lawsuits,” read the Jan. 2 motion to dismiss. “Ms. Arthur, and others like her, cost all honest consumers money by forcing small businesses to raise their prices for rooms & services as a result of similar actions by a few ‘bad apples.’ Meanwhile, during the past 17 years, the Abbey Inn has paid substantial sums in state and local taxes as well as to local workers and small businesses.”

When Call 6 Investigates interviewed Arthur on Dec. 18, Arthur said she and her husband are both employed as custodians.

Szakaly also alleged Katrina Arthur was aware of the Abbey Inn policy regarding online criticism, despite her assertions she did not know about it.

“When she booked her room at the Inn online, she agreed that she had read and agreed to that policy,” the motion alleged. “Then, when she arrived at the Inn, she signed the registration card given to her by the on-duty staff person, again confirming that she agreed to the Abby Inn policies. Only after leaving the Inn without making any complaints, did she demand a refund and then posted the damaging, false, online review.”

Szakaly said the lawsuit and Arthur’s “inaccuracies” have led to death threats against the new management.

Sweet told Call 6 Investigates the backlash has been so strong, she planned to close the hotel and reopen under a new name.

The Abbey Inn closed its doors and removed its signage and following renovations, it reopened this summer as The Yellowwood.

Skazkaly told Call 6 Investigates he put the complaint policy in place for a reason.

“Several years ago the Inn began to experience what has become known in the hospitality industry as ‘social media blackmail,” read the statement. “A guest would complete their stay, leave without making any complaints regarding their stay, then later demand a refund or they would post negative comments regarding the Inn on social media. In an attempt to meet the guest's needs while protecting itself from false reviews, the Inn, between Fall 2015 and Summer 2016, required prospective guests to confirm they had read the Inn's ‘complaint policy’ (published on the Inn's website & repeated on the online booking site) when they booked online and when they arrived for their stay.”

Szakaly said the policy, which ended in the summer of 2016, requested guests notify the Inn staff of any problems during the guest’s stay and allow the staff to address the problem.

“If the guest could not find a staff person, the guest was also given a phone number to call to report any problems,” said Szakaly in a statement to RTV6. “Should the guest fail to do so during their stay, and later published a false statement regarding the Inn and failed to remove the false statement after a request to do so, that guest authorized Abbey Management Inc. to charge that guest no more than $350 as ‘liquidated damages’ for their published false statement.”

The Indiana Attorney General is asking anyone who believes they may have been penalized for posting truthful reviews online to contact his office by going online to indianaconsumer.com or by calling 1-800-382-5516.