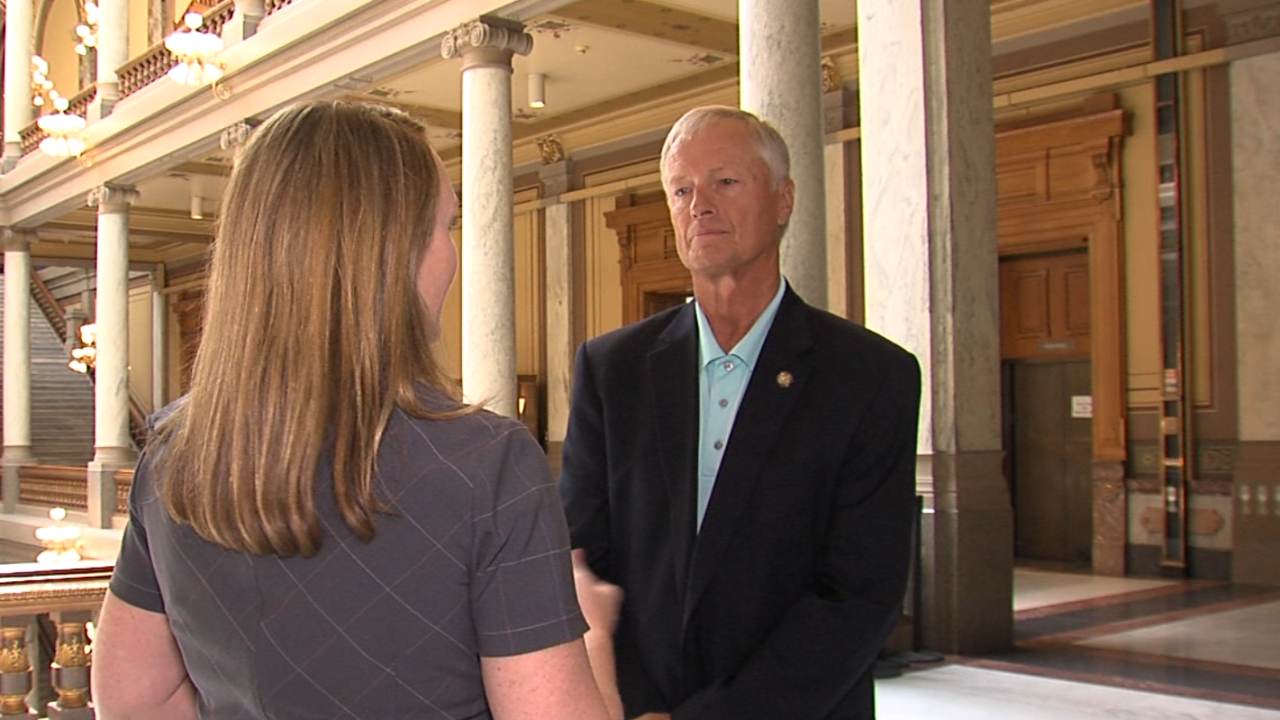 RTV6
Rep. Randy Frye, R-Greensburg, said the state should look at the lack of tornado shelters in schools on Wednesday, July 31, 2019.

SALEM — An Indiana state lawmaker says the legislature needs to look at how to better protect students during a tornado.

Call 6 Investigates found Indiana is at high risk for tornadoes and K-12 students are vulnerable to flying debris. However, Indiana has no laws or building codes in place requiring tornado shelters in your child’s school, nor does Indiana have any rules requiring newly constructed schools include a storm shelter.

“I think it’s something we need to look into,” Rep. Randy Frye, R-Greensburg, said.

Frye is the chairman of the Indiana House Veterans Affairs and Public Safety Committee, and a deadly tornado touched down in his district in 2012 in Holton, Indiana.

Frye said his committee hasn’t talked about the lack of tornado shelters in Indiana schools.

“We haven’t had any discussions about it to this point, but I’m certainly looking forward to it,” Frye said.

Most Indiana schools do not have basements, nor do they have tornado shelters or safe rooms in place, leaving children to hunker down in interior hallways and rooms. Call 6 Investigates has learned federal funding is available to build tornado protection for students, but most schools have not applied for the money.

“We need to promote the fact that there are federal grant dollars for it and schools can take advantage of this even without changing the code,” Frye said.

“Maybe they have some advice about how we can build them across the state,” Frye said.

If Indiana opts to require schools to include storm shelters in newly constructed schools, the state will have to determine who will pay for it and how. Adding a tornado shelter to a newly constructed building adds about 5 percent to the cost of the school.

“It could be existing money could be channeled in that direction,” Frye said. “We do provide money annually for school safety and this is certainly school safety. It will certainly be something to look at.”

Legislative services will analyze any costs that could come with requiring tornado shelters in Indiana schools. The Indiana Department of Homeland Security wants schools to know the state can receive grants for up to 10 tornado safe rooms per year.

“We need to build up how many of these we have in our state, so we are trying to get the word out about safe rooms,” Mary Moran, branch director with IDHS’s Response and Recovery Division, said. “We have to meet the federal standard for safe rooms when we use federal dollars to fund them, and the standards are much higher and can withstand much higher wind gusts than a regular building.”

The state’s hazard mitigation program has been around for decades and has mostly focused on flooding because it’s the most costly and frequent disaster, but Moran said they are trying to shift more attention to tornadoes.

Moran said many school districts do not apply because they have to put up a 25% match, and because of the staff time involved in applying for the grant.

“These are very detailed applications, and it does take a lot of work,” Moran said. “About a year, to a year and a half to develop an application."

Moran said parents should pay attention to where their children are going during a tornado.

“I think it’s a very big deal to have a safe room,” Moran said. “If I were a parent, that would definitely be a selling point if the building where my child was going was reinforced.”

Indiana is at high risk for tornadoes, according to the Indiana Department of Homeland Security, which means our schools and children are vulnerable throughout the school year.

This map shows Indiana is at risk for high wind and tornado events with wind gusts of over 250 mph.

“As we build more things, there will be even more people potentially at risk,” Moran said. “We can’t tie a specific GPS location to where it’s going to strike. It can happen anywhere across the state.”

An average of 1,253 tornadoes happen in the United States every year, data shows, with Indiana averaging 22 twisters a year. Peak tornado season here in central Indiana is spring into early summer with a secondary season in the fall.

“Every school and every child are potentially impacted by tornadoes,” Moran said.

We’ve seen both urban and rural areas hit by tornadoes in recent years, including the June 15 damage to Beech Grove High School.

A basement is one of the safest places to be during a tornado, but unfortunately, most schools in Indiana do not have basements. Most students go to an interior hallway or room with no windows and doors and hunker down with their hands behind their head.

“Some protection is better than no protection,” Moran said.

Storm shelters offer much more protection from flying debris, which is one of the biggest risks during a tornado.

Do you want to bring a tornado shelter or safe room to your child’s school? Talk to your principal, superintendent or school board and visit the Indiana Department of Homeland Security’s mitigation website for more information about tornado safe room funding.

You can also talk to your state lawmakers about what they’re doing to keep students safe during a tornado.