Less than half of schools believe their bullying numbers are accurate, new report shows 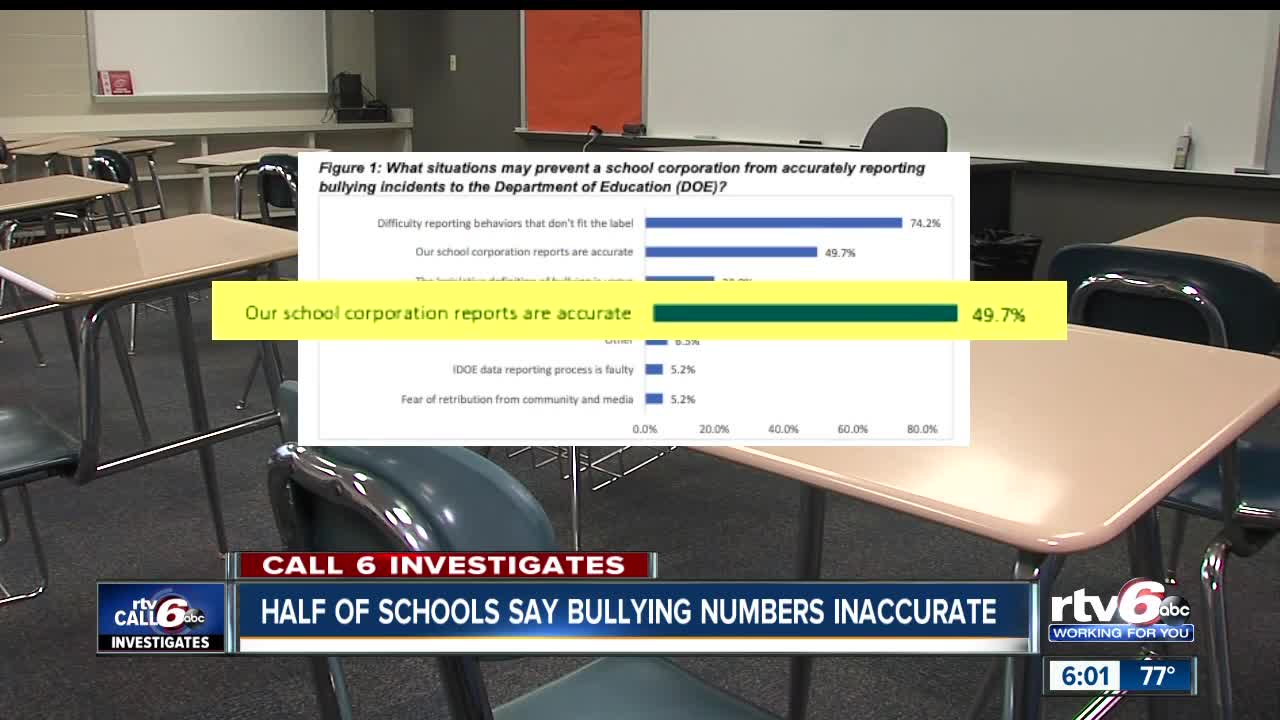 A new report is highlighting concerns about why schools are not reporting bullying incidents accurately.

INDIANAPOLIS — A new report is highlighting concerns about why schools are not reporting bullying incidents accurately.

Following a Call 6 Investigation that found most schools reported zero bullying incidents, a new law took effect in July 2018 that requires the Indiana Department of Education to survey schools to find out what’s preventing them from reporting accurately.

The report reveals less than half, 49.7%, of school districts believe their bullying numbers are accurate.

The Indiana Department of Education asked schools what prevents them from accurately reporting incidents to the state.

Nearly three quarters responded they have difficulty reporting behaviors that might not necessarily fall under the bullying label.

Twenty percent of schools reported the state’s definition of bullying is too vague.

The definition includes that bullying must be repeated acts or gestures.

IDOE spokesperson Adam Baker explained some schools may characterize incidents as fights or peer conflicts, rather than bullying.

“Schools can mark it as a classroom disruption or one of many codes, so it isn’t always marked as bullying,” Baker said.

In 2017, Call 6 Investigates found schools misreporting their bullying numbers — in at least one case by more than 500 percent in a single year.

SEE THE INVESTIGATION HERE | Despite law, schools are misreporting their bullying data

The first of its kind survey that sought to uncover what’s stopping schools from reporting accurate bullying numbers found only 49.7% of schools believe their numbers are accurate, 14% blamed lack training regarding bullying, 5% believe IDOE’s data reporting process is faulty, and 5% fear retribution from the community and media.

"A lot of schools grapple with the definition,” Baker said. “We have districts reach out and say here's the specific situation. How do I define this?"

Schools also reported parents do not comprehend the legal definition of bullying.

Sixty-nine percent said training for parents and students on what constitutes bullying would be helpful, and 39% requested additional training resources from IDOE.

Baker said IDOE will do what it can to get accurate data that will help them track bullying and prevent it.

"You can't resolve an issue if you don't know an issue exists," said Baker. “The more we understand the problem of bullying in schools, the more we know the job we need to do as educators. Our job isn’t just to teach math or English but also to shape their lives.”

The bullying numbers for the 2018-2019 school year are due next month.

"We're really at a point now where the statute is clear, the definition is there, the glitches are fixed, there really is no excuse now," said Baker. “It’s absolutely important to be accurate. We are putting the pressure on them to say ok, go, put these numbers in and let us know how you’re doing and what’s going on in your school.”

IDOE is concerned only 49 percent of schools that responded felt their numbers were accurate.

They have developed a plan to improve accuracy that includes providing training to school corporations and disseminating resources to parents so they can get a better understanding of bullying.

The survey was not mandatory.

For more information about bullying training you can call Robin LeClaire, director of school improvement at IDOE at 317-232-0254 or reclaire@doe.in.gov.