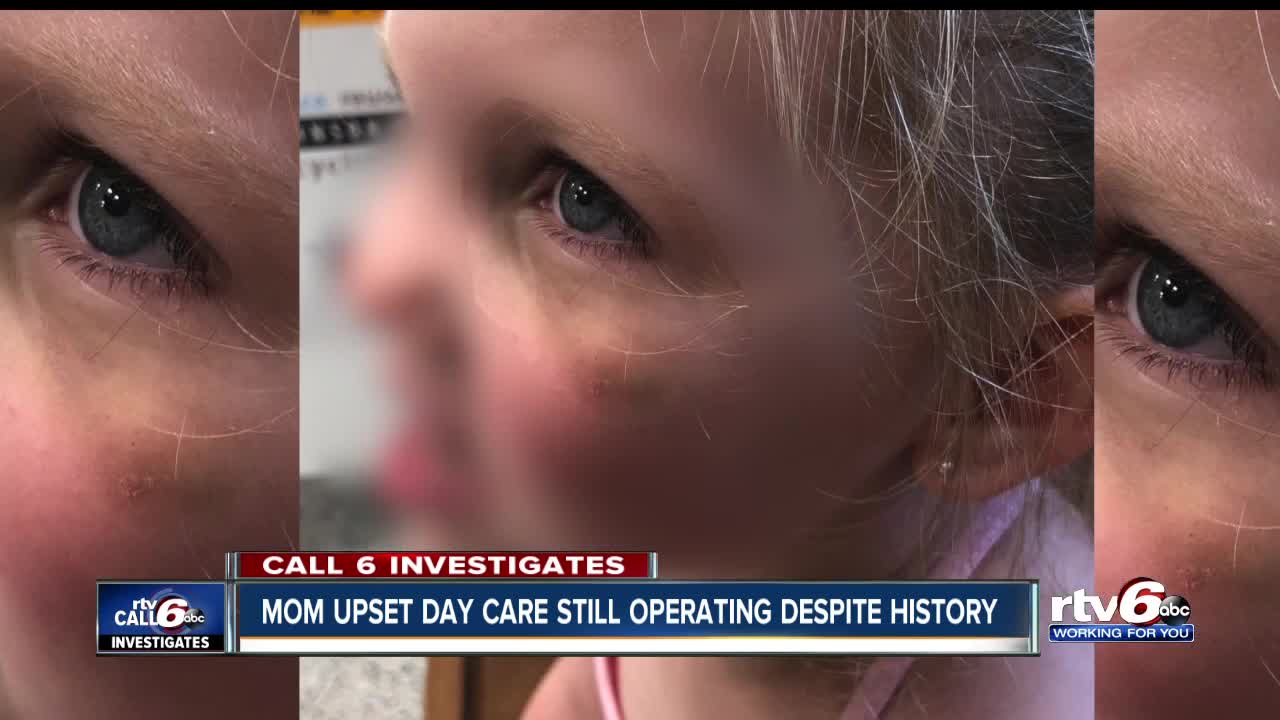 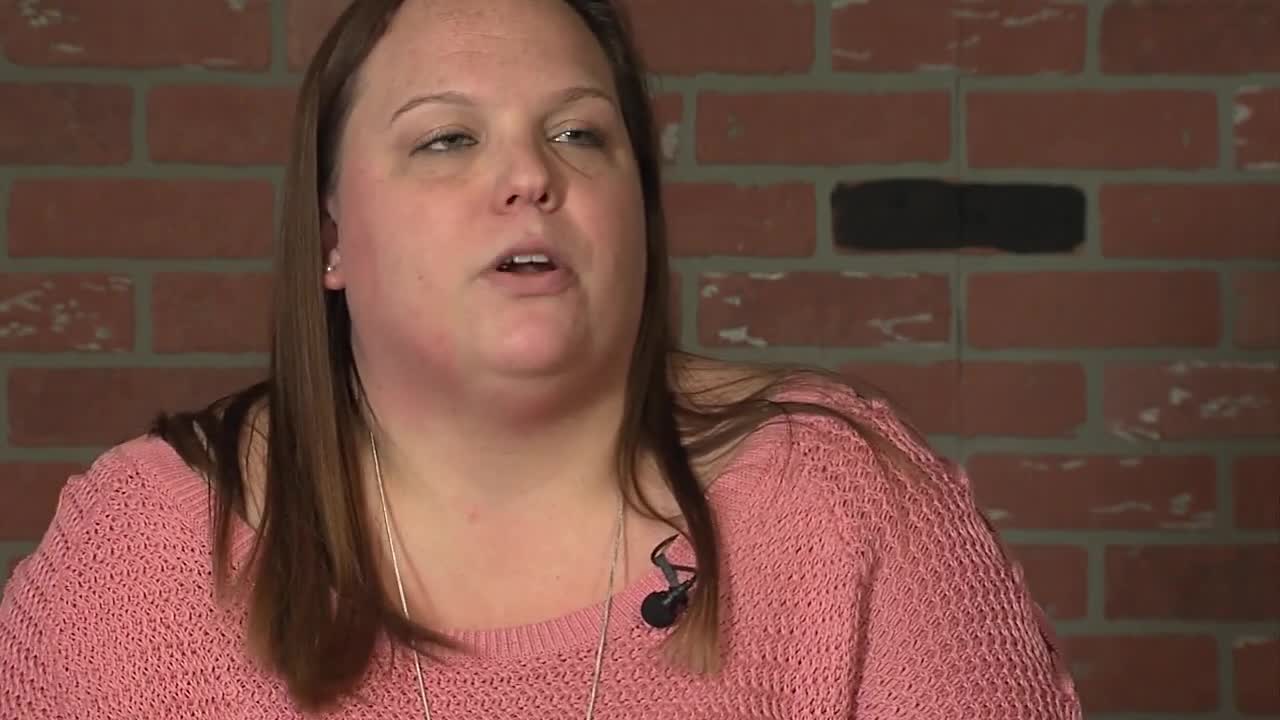 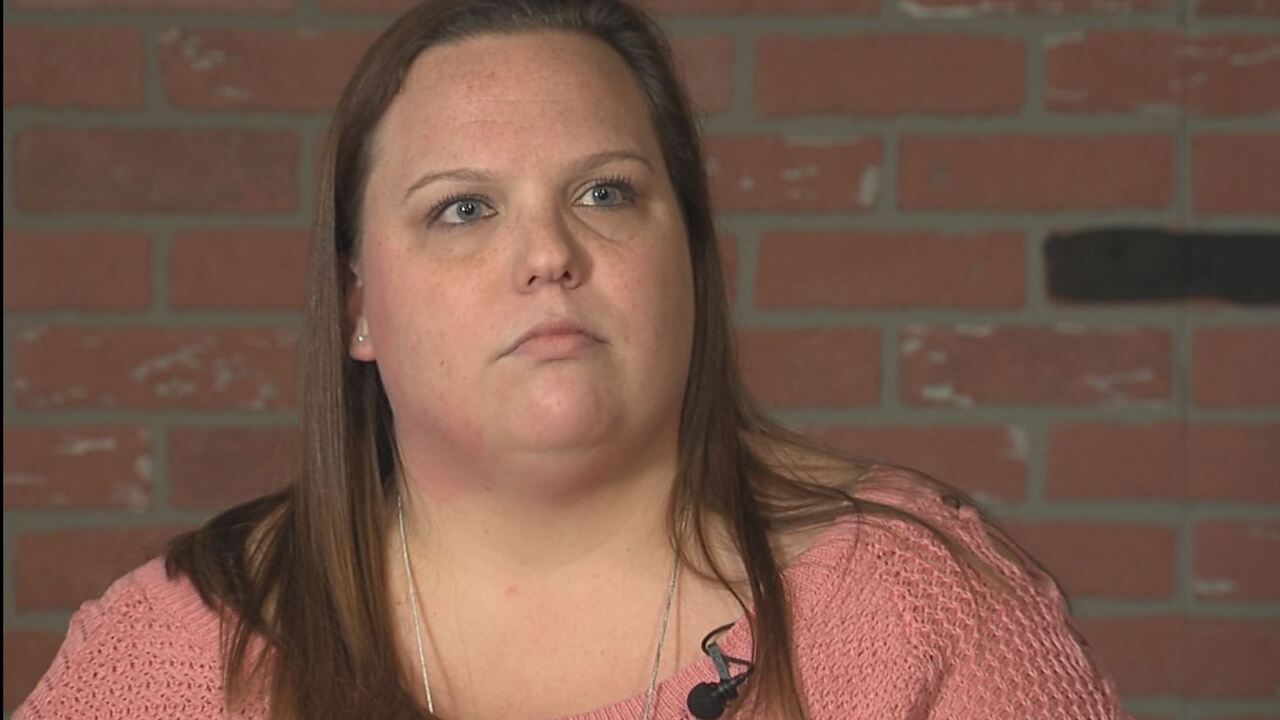 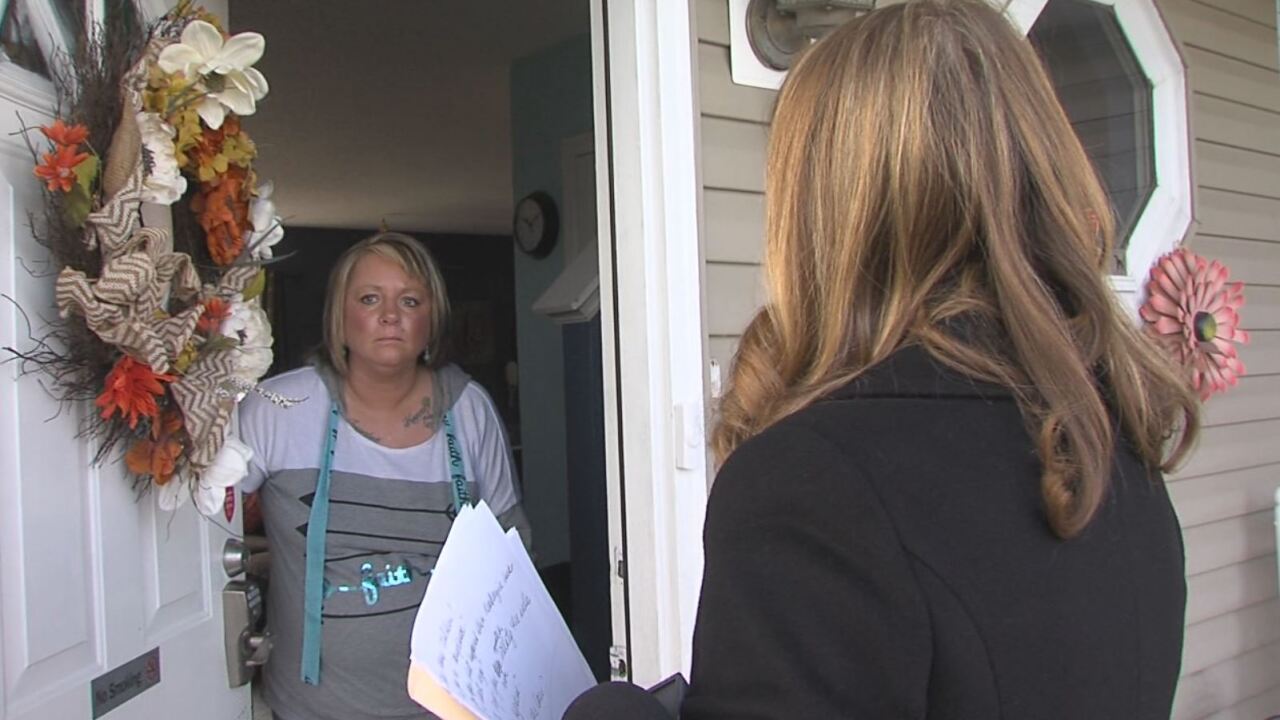 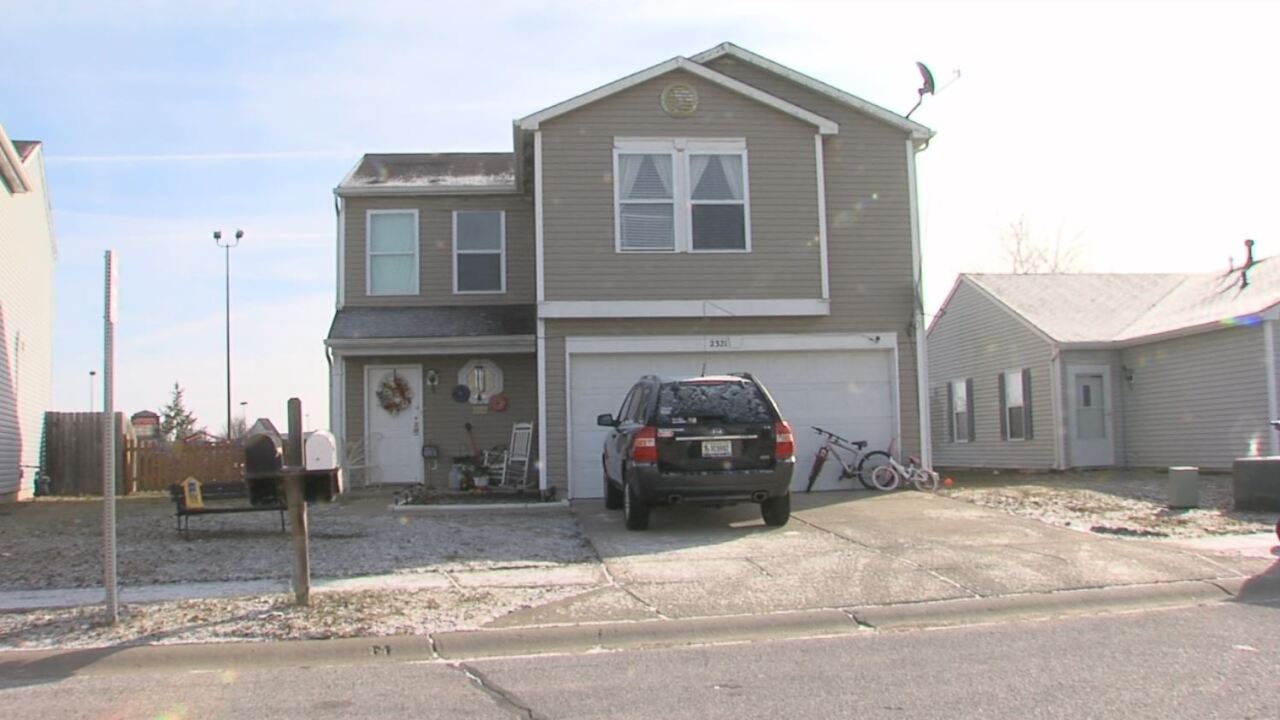 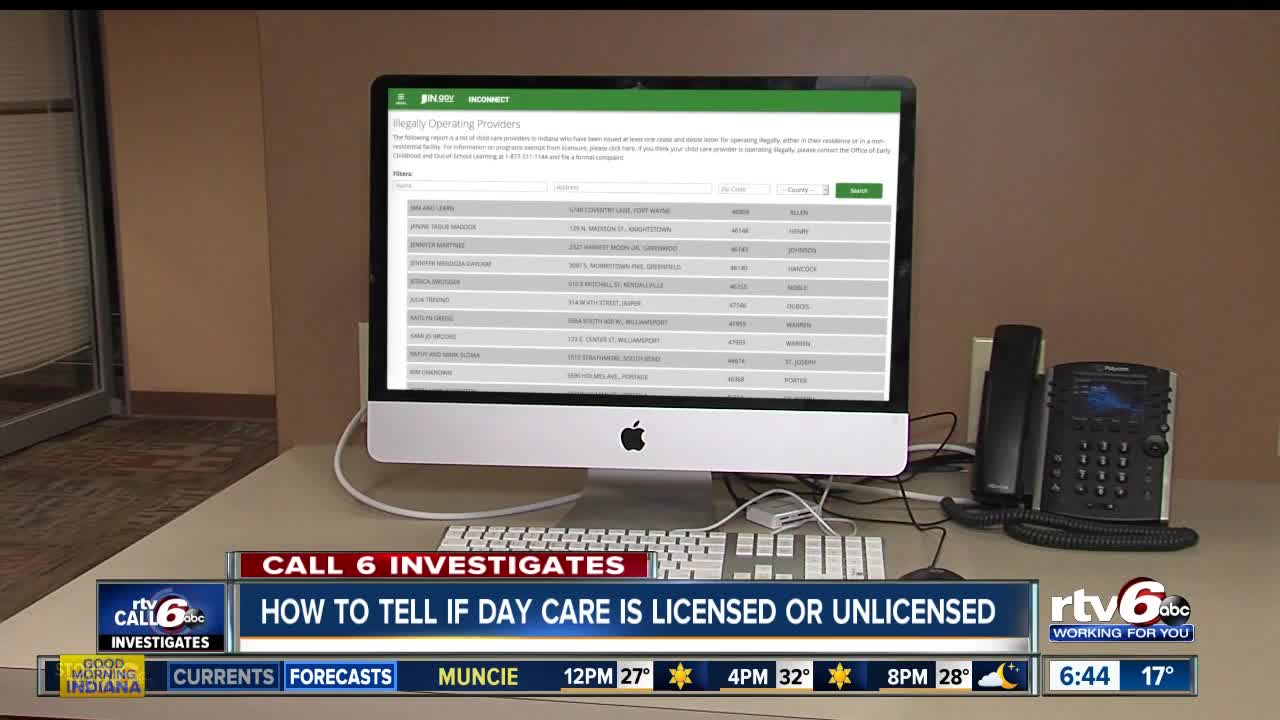 INDIANAPOLIS — A south side Indianapolis mother is warning other parents after her daughter was injured at day care suspected of operating illegally at the time.

Call 6 Investigates has learned the state has repeatedly cited the provider, Jennifer Martinez of Greenwood, for having too many children without a license.

Martinez is still watching children in her Greenwood home, which raises questions about what the state can and can’t do about illegal child care providers.

MORE |How to tell if your child care is licensed, unlicensed or illegal| TIMELINE: Greenwood daycare's history of operating without a license 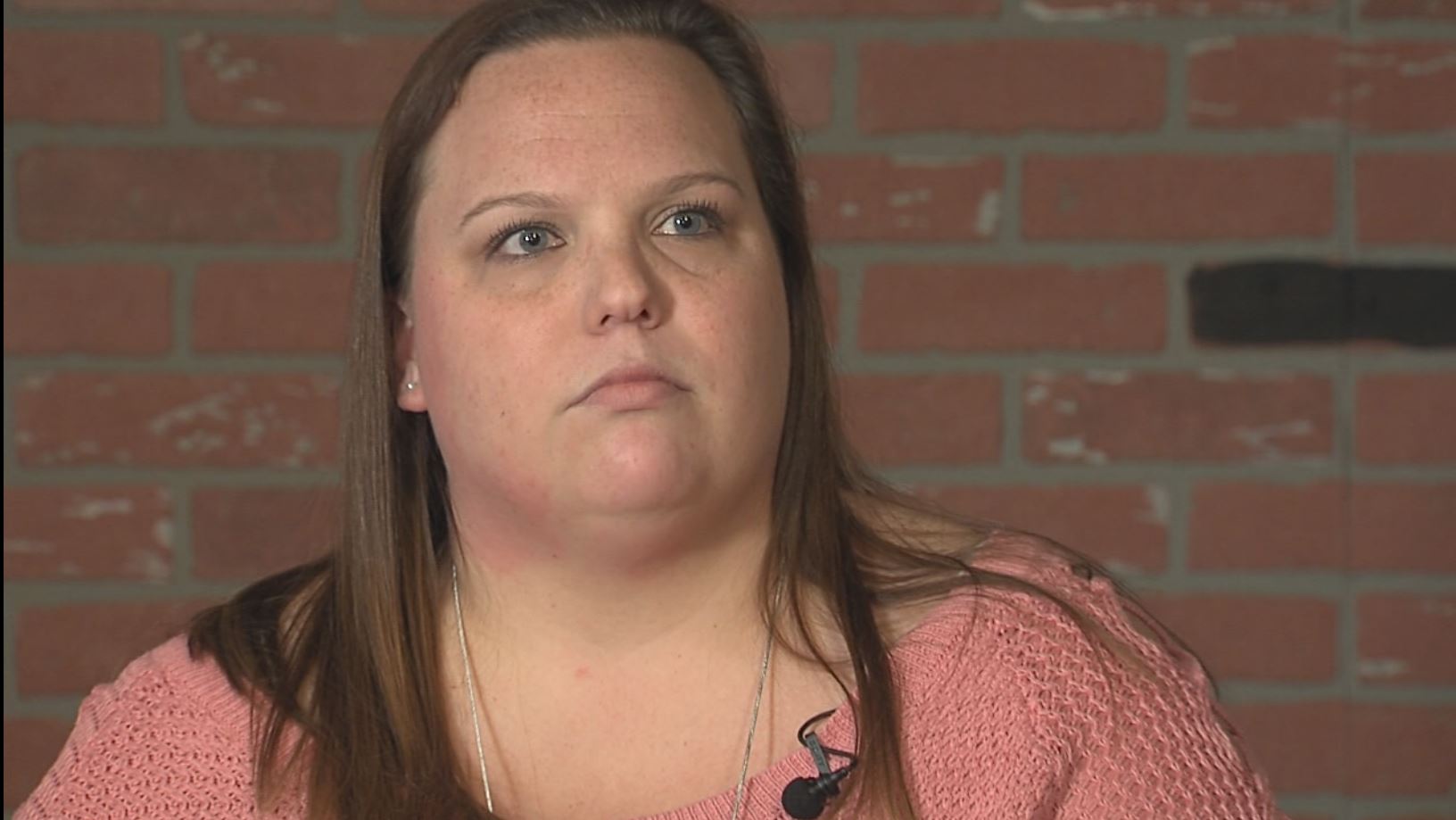 Many people post on Facebook when they’re looking for child care recommendations, which is exactly what southside mother Melissa Lucas did.

“I knew we were approaching kindergarten, and I really wanted her to have social interaction,” said Lucas.

“She seemed very official, and she said she was sleep safe,” said Lucas. “It made me happy that there was a code to get into her home. Everything was neat, and tidy and well put together.”

Safety has always been a priority for Lucas.

The text also included a photo of Mackenzie’s face, showing a bruise near her eye.

“My heart sank,” said Lucas. “I’m like, ‘oh my goodness, what could have happened?’ I know accidents happen but I wanted an explanation.”

Lucas left work and raced to the day care to get Mackenzie.

“She looked around and then looked at me and said i fell and hit my face on the changing table," said Lucas.

Lucas asked to see what the day care’s cameras captured, but Martinez said she couldn’t retrieve the footage.

The situation did not sit well with Lucas, who contacted the Greenwood Police Department.

No criminal charges were filed with regards to Mackenzie’s injury, and the Department of Child Services took a report on the injury, but DCS screened out the call—meaning it did not meet the threshold for investigation.

“I feel failed as just one mother to one child,” said Lucas. “There’s no way no one saw what happened. When Mackenzie falls, she cries.”

A DAY CARE’S LONG HISTORY WITH THE STATE 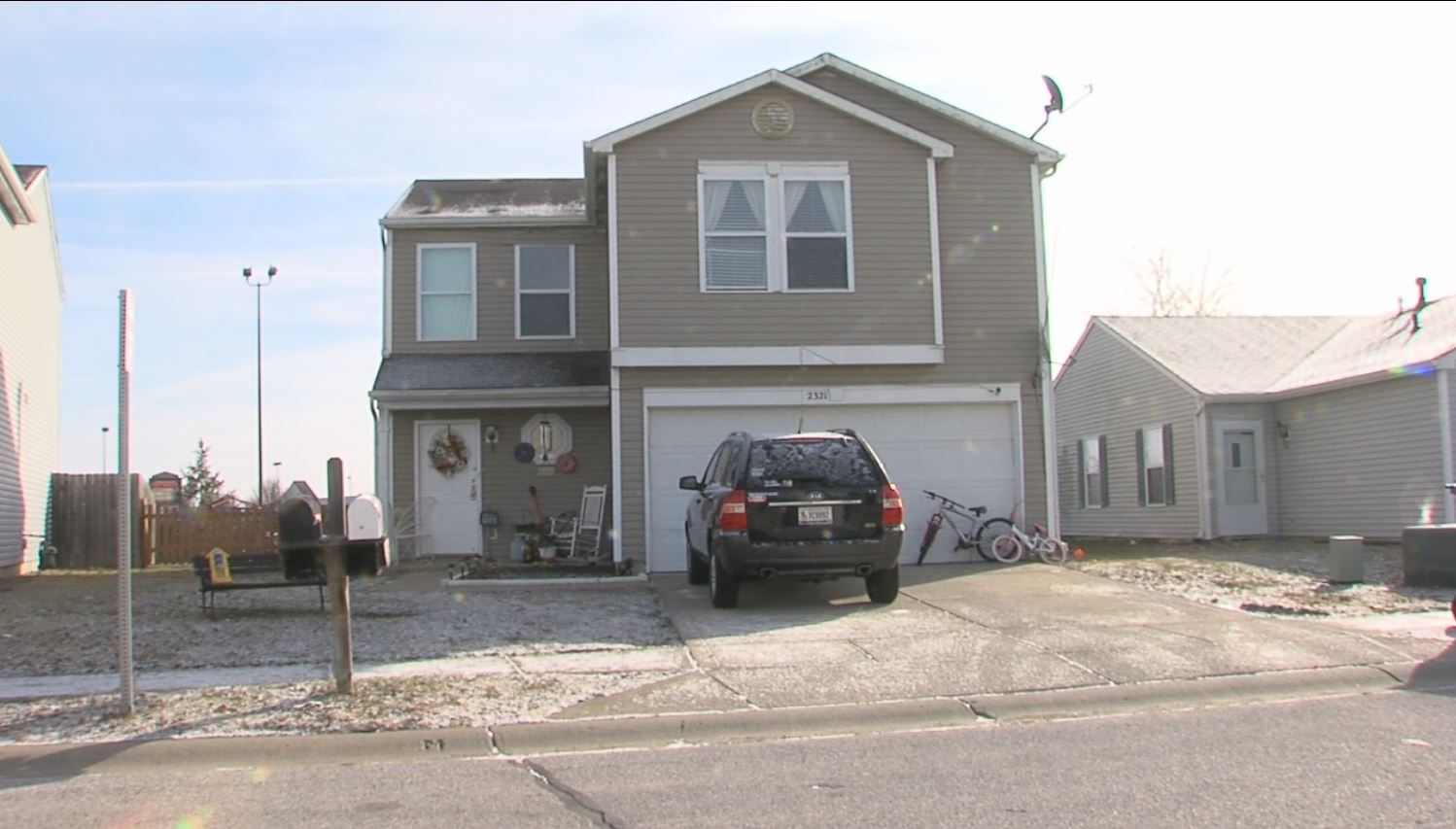 When Greenwood Police responded to Forever Friends Preschool and Childcare on July 17 2018, officers found 17 children at the day care.

In Indiana, a child care provider needs a license if they’re watching 6 or more children unrelated to the provider.

MORE COVERAGE: How to tell if your child care is licensed, unlicensed or illegal

Records show the state has cited Jennifer Martinez time and time again for operating illegally—having too many children without a license.

In May 2015, state inspectors with the Family and Social Services Administration responded to a complaint about Martinez’ day care on Sassafras Trail in Greenwood.

FSSA found 12 children inside the home, and left a plan of correction for Martinez requiring her to watch five or fewer unrelated children.

FSSA did a follow up visit in June 2015, and found 9 children inside the day care, but Martinez told the inspector she was moving in with her mother in another county, records show.

In April 2016, the Department of Child Services received a report of alleged child neglect at Little Hands, Big Hearts including children left in portable cribs all day, children not changed properly, and not enough staff for the number of children.

DCS investigated, but due to lack of evidence and their interview with Martinez, DCS found the neglect allegations against Martinez to be unsubstantiated.

During the DCS investigation, Martinez said there was a house fire at the day care, but it happened while a helper was in the home and it was quickly contained.

In April 2016, the Family and Social Services Administration (FSSA) spoke to Martinez who admitted to watching 10 children daily.

FSSA left another plan of correction with Martinez on April 15, 2016, reminding her she could only watch five or fewer unrelated children in her home at a time.

When the state returned on April 27, 2016, Martinez had 15 children in the day care, records show.

FSSA issued a cease and desist order to Jennifer Martinez on April 29, 2016.

In August 2016, FSSA received yet another complaint about Martinez operating illegally and the state found 10 children in the home.

Yet again, FSSA left a plan of correction with Martinez reminder her she could only have five or fewer children in the day care without a license.

In September 2016, the Attorney General’s office filed a lawsuit against Martinez to stop her from operating illegally.

In January 2017, Martinez reached an agreement with the Attorney General’s office saying she would care for five or fewer unrelated children and pay a fine.

In May 2017, the state denied Martinez’ application for a child care home license.

After Greenwood Police responded to Martinez’ day care on Harvest Moon Drive in July 2018, the Attorney General took Martinez back to court. accusing her of violating the court order by caring for too many children without a license.

In October 2018, Martinez and the Attorney General reached another agreement in which Martinez said she would only watch five or fewer children without a license, pay a $3,600 civil fine and also agreed to two years of unannounced inspections by FSSA.

As part of the agreement, Martinez must also notify FSSA and the court of any changes in her address.

Melissa Lucas had no idea of Jennifer Martinez’ past with the state when she placed daughter Mackenzie in her care.

“Absolutely not,” said Lucas. “Had I known, I never would have sent our daughter there.” 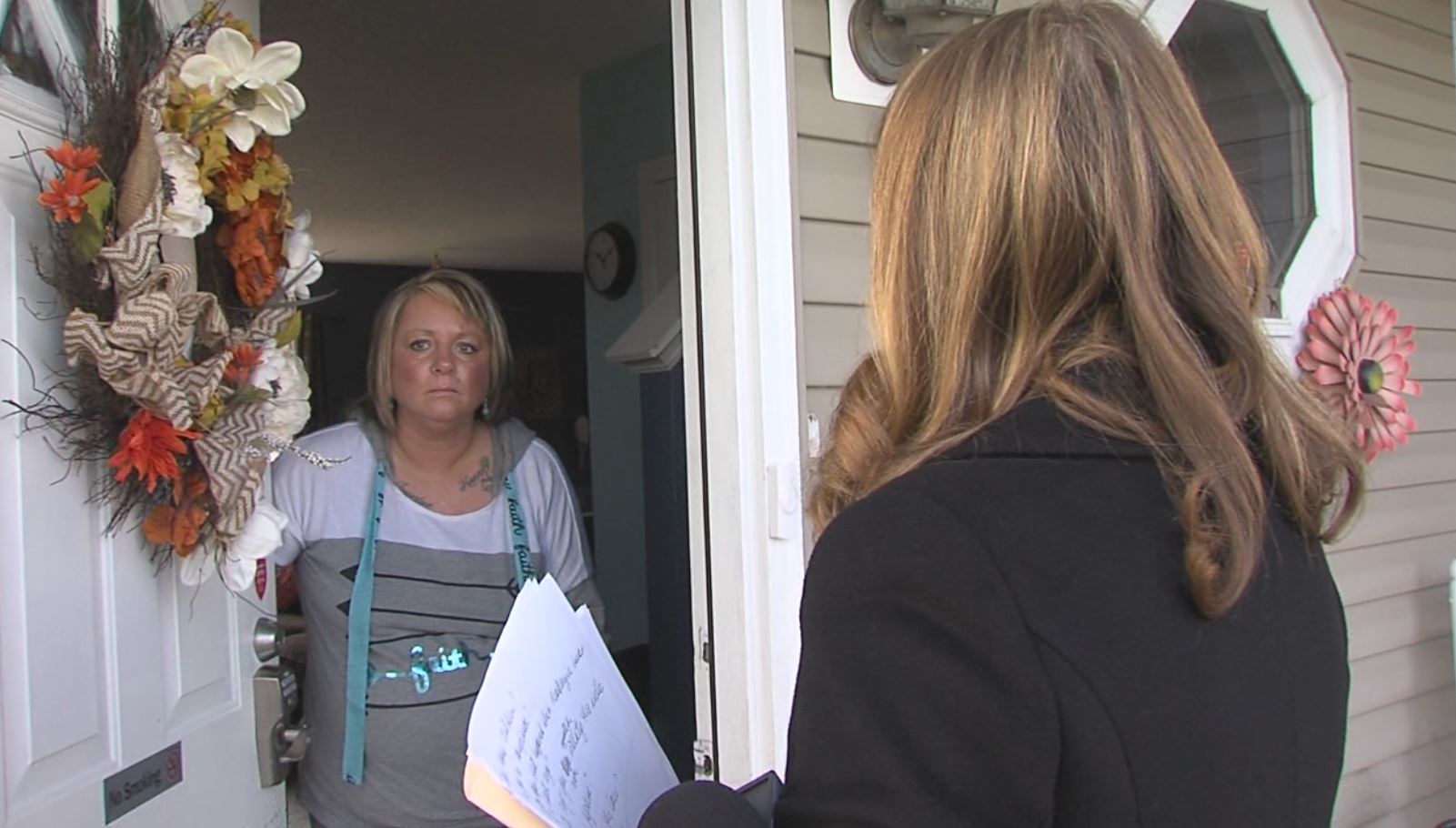 Call 6 Investigates stopped by Martinez day care on January 28 and counted a total of six children leaving the home on Harvest Moon Drive between 4:30 pm and 5:42 pm.

On February 8, Call 6 Investigates counted five children dropped off between 6 am and 9 am.

Per court order, Martinez is allowed to watch five or fewer children that are unrelated to her.

Call 6 Investigates emailed Martinez asking for an on-camera interview and whether she’s in compliance with the law.

Martinez did not respond to our email, so Call 6 Investigates showed up to a February 19 eviction hearing for Martinez’ Harvest Moon Drive home.

Martinez did not show up to the eviction hearing, so RTV6 knocked on her door.

Martinez opened the door and quickly shut it.

She emailed RTV6 later that day.

“I am completely in compliance with the state of Indiana regarding my daycare,” said Martinez in an email to RTV6. “I do not wish to speak to you and I don’t appreciate you showing up at my home. I have filed a report against you, if you continue to harass me I will take further action.”

Melissa Lucas said it’s concerning that Jennifer Martinez can watch children at all.

ATTORNEY GENERAL’S OFFICE LIMITED IN WHAT IT CAN DO

Garn explained their office has only a few options including filing paperwork to stop a day care from operating illegally and asking the provider to pay a fine.

“Under civil law, our options are limited,” said Garn. “It’s relatively limited to filing for an injunction to stop them from running an illegal child care home, or asking them to pay civil penalties.”

Call 6 Investigates asked Garn how it’s possible someone like Martinez could watch children in her home at all, given her past with the state.

“The attorneys handling these cases work vigorously to make sure the people are following the law and working for the public safety,” said Garn. “As far as saying you can't watch kids at all, that's not an option we have in civil court."

Garn said explained once a provider is found in contempt of court, the judge has other options to impose such as unannounced inspections.

Garn also pointed out prosecutors and judges have more options in a criminal case.

For example, illegal day care provider Stephanie Gribble was ordered to never have contact with any children except her own.

Gribble was criminally charged with drugging children in her care, and is currently serving a 10 year prison sentence which includes never working or operating a day care facility again.

“When you have a criminal proceeding a judge will have more options,” said Garn.

Jennifer Martinez has not been criminally charged with regards to her child care facility.

A court hearing is scheduled for April 5.

Per the court order, the Indiana Family and Social Services can do unannounced inspections of Martinez day care for two years, until October 2020.

After receiving a complaint about Martinez watching too many children, FSSA inspected the day care on January 14 and found five children inside the day care—which is in compliance.

Nicole Norvell, director of Early Childhood and Out of School Learning for the Indiana Family and Social Services Administration, said their agency relies on the community to file complaints about suspected illegal child care facilities.

Licensed providers have to complete CPR and safe sleep training, follow child to staff ratios and conduct criminal background checks on their staff.

Almost always, the letter prompts the provider to get licensed or reduce the number of children.

“The process is working,” said Norvell.

If FSSA receives a complaint about a suspected illegal provider, they go out and inspect and then follow up again.

“Our consultants are required to check once a quarter for the next three quarters, because sometimes they will stop operating and then start again,” said Norvell.

On FSSA’s website, Jennifer Martinez is among dozens of providers the state says has operated illegally.

“We just want children to be safe,” said Norvell. “Anytime you don’t have enough staff for the number of children, anytime you have staff that haven’t undergone basic CPR or first aid training, you certainly set up scenarios in which children can be injured.”

A MOTHER’S REGRET: “It kills me inside”

“Now, my wall is built back up on trusting people,” said Melissa Lucas. “It’s constantly in my head—is she OK?”

Lucas wishes she had known to check FSSA’s website before choosing a child care.

“As a parent, I didn’t even know the difference between licensed and unlicensed,” said Lucas. “It makes me feel like a terrible mom. I let my child down and I was supposed to protect her and I didn’t, and it kills me inside.”

Lucas is sharing her story in the hopes of preventing other parents from going through a similar experience.

“Do your research,” said Lucas. “I had to learn the hard way.”

WHAT’S NEXT FOR JENNIFER MARTINEZ

Martinez is due in court on March 19 for another eviction hearing on her Harvest Moon Drive home, as well as an April 5 hearing in the Attorney General’s case.

Martinez must notify the court and the state if she changes addresses again.

Martinez has not been criminally charged with anything in connection to her child care operation.

Call 6 Investigates found examples of other child care providers charged with operating a child care home without a license, which is a misdemeanor.

Debbie Keyes pleaded guilty to reckless supervision by a child care provider and operating a child care home without a license after a 1-year old girl died in her unlicensed day care.

Foster has contacted the Attorney General’s office to learn more information about Martinez.