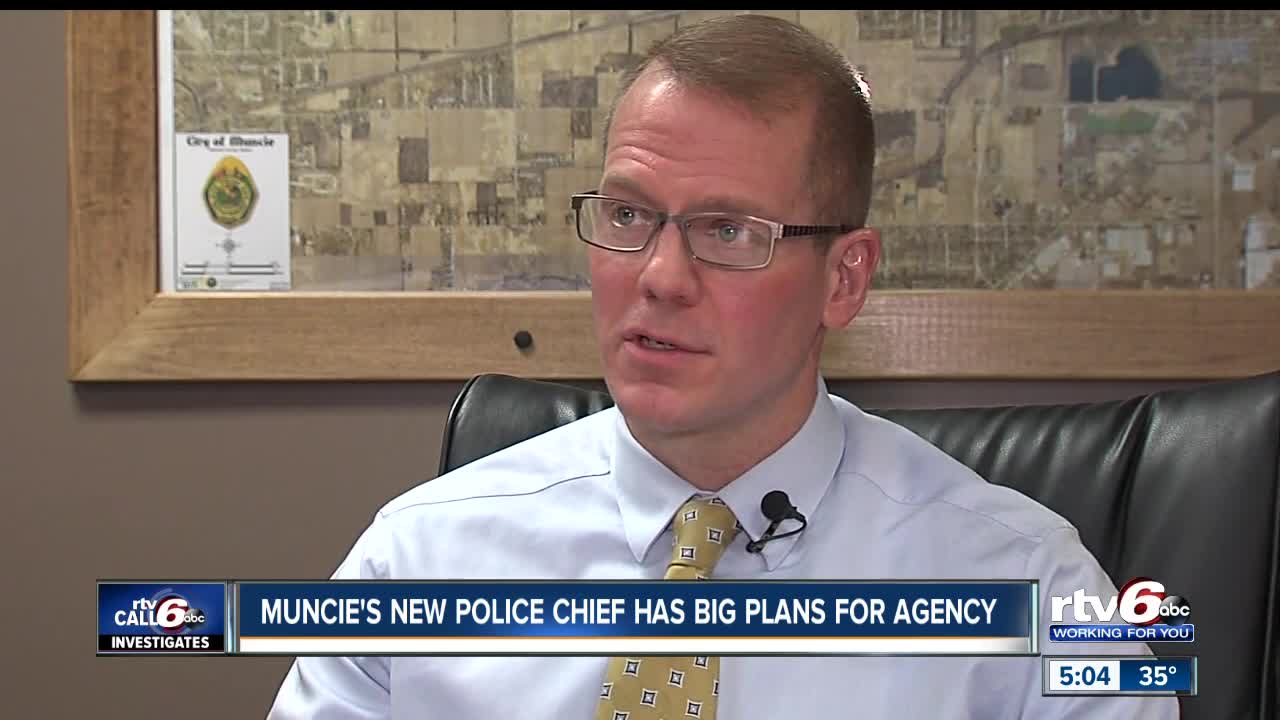 Muncie Police Chief Joe Winkle’s last day on the job was December 30. Winkle is clearing out his office for the city’s new police chief— Nathan Sloan, a former detective and 18-year veteran with the department.

Winkle is clearing out his office for the city’s new police chief— Nathan Sloan, a former detective and 18-year veteran with the department.

Instead of solving homicide cases, Sloan will now be working to solve some of the agency’s biggest problems— poor morale, lack of manpower, and officer turnover, Sloan says.

“We’re kind of like a revolving door,” Sloan said. “We get officers trained on a variety of calls— shootings, stabbings, robberies, sexual assaults. Those things that are typically associated with bigger cities is exactly what we’ve got here.”

Call 6 Investigates sat down with Sloan on Monday to find out how he plans to improve public safety and restore the public’s trust in the department.

“I really want to reach out to the community and get a better working relationship, and we feel like right now it’s a little disjointed,” Sloan said. “If we can open ourselves up to more public exposure and get people to come on ride-alongs and things like that, they’re going to better understand our position.”

Sloan, who starts his new position as chief on Jan. 1, comes in during a turbulent time for the City of Muncie and the department.

Mayor Dennis Tyler decided not to run for re-election and is federally charged with theft of government funds.

Call 6 Investigates asked Sloan how the agency can move forward with the ongoing investigations.

“At this point, we really just have to review everything,” Sloan said. “We need to get our head wrapped around what’s gone on, what’s going on, and see where that leaves us to go on from there.”

Call 6 Investigates asked Sloan if there will be any personnel changes.

Both Pease and Sloan said they haven’t been privy to much of anything related to the federal probes, but acknowledged it will impact the agency in the future.

“We have not had the liberty to review anything at this point, and we really don’t know the details,” Pease said. “I’m sure it will affect us in the new administration, but we will deal with each issue. Transparency is a big word we are keying in on for our department and just improving communication.”

No one has been charged in connection with the federal investigation into police excessive force, which is considered a separate investigation.

Pease also said public trust is something that needs to be improved.

“I think there have been some issues,” Pease said. “Some relationships have been fractured, but that’s definitely one of our main objectives coming in as a new administration—to work with the community.”

Pease, a patrolman, said the agency needs to improve the resources available to officers and the community.

“A lot of times when we’re out on the streets after hours, we’re trying to come up with who we can call to help an individual, where can we take this person to get them the help they need,” Pease said. “For us, it just feels like you’re doing the same thing over and over but you’re not really accomplishing anything.”

Right now, the department is budgeted for about 108 officers but only 93 are working on the force, Sloan said.

“We need to get that number up,” Sloan said. “We’re going to do everything we can to hire aggressively.”

Both Sloan and Pease said they’re excited but also overwhelmed by the tasks ahead.

“It’s a daunting task,” Sloan said. “We’ve got a lot in front of us, so it’s a sweet and sour situation.”