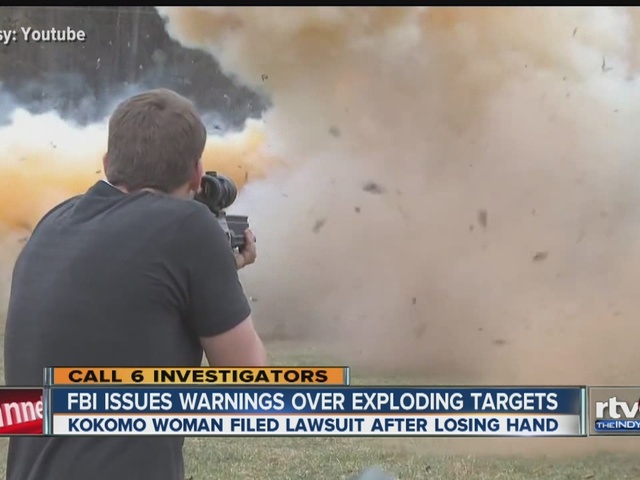 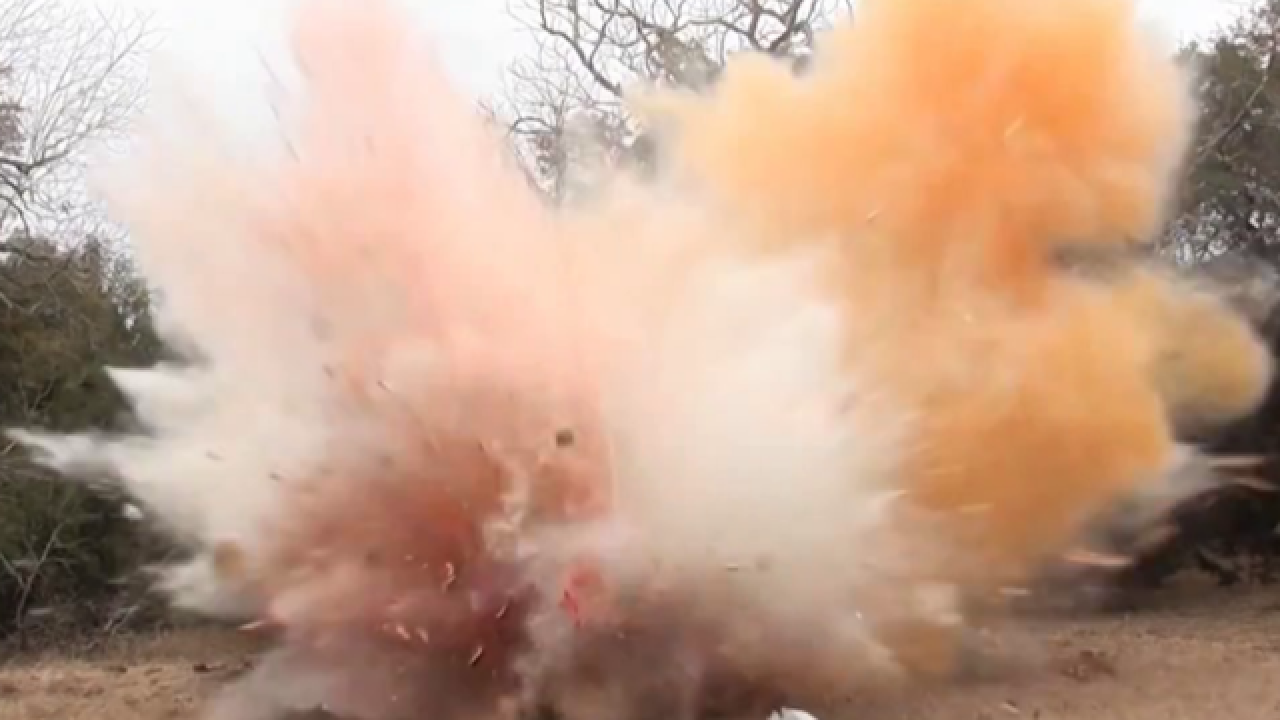 The FBI says exploding targets are so dangerous, they issued an intelligence bulletin to law enforcement, warning that exploding targets could be used by criminals and terrorists to make improvised explosive devices (IEDs).

Exploding targets are sold under a variety of brand names, the most popular being Tannerite, and they're supposed to be used by rifle shooters to ensure they hit their target from long range.

They’re readily available and easy for people of all ages to buy off store shelves in Indiana.

But the Call 6 Investigators found the products are being misused and abused, because people often use too much, stand too close, or place the product inside something that can create shrapnel.

Jennifer Plank-Greer, of Kokomo, lost her hand at a friend's house in Ohio on May 6, 2012, from a piece of flying shrapnel.

She captured the explosion on her cellphone from 150 yards away and says she was unaware an exploding target had been placed inside a refrigerator.

"I had no idea there was anything like that being used," said Plank-Greer. "The binary compound was used and placed inside the refrigerator, and they shot the refrigerator and blew it up."

Plank-Greer said she had just planned on taping her friend firing a brand new gun.

"It hit me so fast, I didn't even have time to react, and next thing I knew, my hand, my fingers were on the ground," said Plank-Greer.

In December, Plank-Greer and her attorney, Chris Stevenson, filed an amended court complaint in U.S. District Court for the Northern District of Ohio, in Toledo.

"It's a dangerous product and frankly, the foreseeable risks of this product far outweigh any benefit you could ever get from it," said Stevenson. "The fact that someone was not fatally injured in this explosion is a miracle, really."

Plank-Greer is suing H2Targets, the manufacturer of the exploding target, the store that sold it -- Big Buck's Firearms & Sporting Goods -- and the property owner, James Yaney Jr. She reached a settlement with the shooter.

Tannerite Sports and Daniel Tanner were originally named in the lawsuit, but will be dismissed, because that company's product was not involved. The Tannerite name is often used as a generic term for exploding targets.

Plank-Greer and Stevenson said the FBI warnings bolster their case.

"It gives credibility to the fact that this is a dangerous product," said Stevenson. "This product is being used to detonate things and blow things up."

The Call 6 Investigators found exploding targets for sale on area store shelves. Indiana has no restrictions, but stores have their own policies.

For example, a cashier at Dick's Sporting Goods on 86th Street asked Kenney for her birthdate, and said you have to be 18 to purchase the products.

Gander Mountain on 86th Street had a sign posted saying you have to be 18 to purchase Tannerite products. The cashier did not ask Kenney for a birthdate or identification.

"Have you guys used this before?" the cashier asked Kenney. "It's pretty exciting. I've never done it myself, but customers always show me videos like, 'You've got to see this one.' It's pretty cool."

"Gander Mountain strictly adheres to all local, state and federal law governing all of the products sold at stores and on-line," said Jess Myers, Gander Mountain media and public relations specialist, in an email to Kenney.

The Gander Mountain cashier is right. A lot of people make videos of themselves using exploding targets.

It's easy to find videos on YouTube of people using the product to blow up items such as appliances and cars.

IMPD's Bomb Squad showed the Call 6 Investigators just how dangerous the chemicals can be once mixed together.

"If you use it outside its normal intent, that is now an improvised explosive device, and that's illegal," said Sgt. Ron Humbert. "Kids are using it. They're taking it out in the country, on a farm, shooting it inside and outside Marion County with their long guns."

Using a controlled detonation, the bomb squad blew up a mailbox, a watermelon and just the container.

Humber said because it's often used on private property, it's difficult for police to keep tabs on.

"Nobody's tracking it, until somebody gets hurt," said Humbert.

"It creates a public safety concern," said Kirk Dennis, ATF special agent bomb technician. "People don't realize the risk. If you put them in a container for something other than intended for, there can be tragic consequences."

The U.S. Forest Service banned the targets on its property in five western states, claiming the exploding targets ignited wildfires that cost more than $33 million to fight.

"Tannerite brand targets are nonflammable and they do not start fires," said Dena Woerner, spokeswoman for Tannerite.

Woerner said the leading manufacturer of exploding targets is launching a letter-writing campaign to people with YouTube videos abusing the product.

"If it's used properly and for what is intended, it's a safe product," said Woerner. "We have a plea for common sense."

Woerner said the company strongly encourages people to not misuse the product.

"We strictly state you need to be at least 100 yards away for every one pound you shoot," said Woener.

Plank-Greer thought she was at a safe range.

"I was approximately 150 yards up range," said Plank-Greer. "I had on safety glasses, hearing protection."

"My medical expenses are $250,000 and I'm not done," said Plank-Greer. "It's just not fair that people can make this product and have it on store shelves."

An attorney for H2Targets declined to comment to RTV6. Attorneys for Big Buck's and Yaney also refused to comment.

Plank-Greer's hand was reattached, but she has little function left.

She wants other people to heed safety warnings.

"I don't want to see somebody else go through what I've gone through," said Plank-Greer.

Experts say if you do use exploding targets, make sure to follow the manufacturer's guidelines and keep a safe distance.

Once the two chemicals are mixed, you need a federal permit to transport it because it's then considered an explosive.

"Don’t use it unless you know what you’re doing," said Dennis.