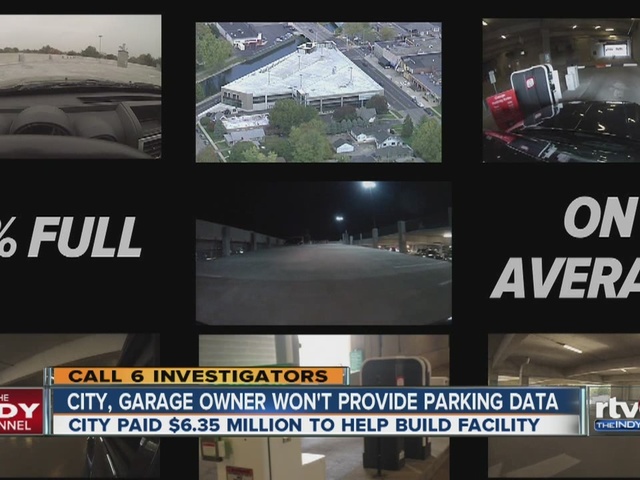 The Call 6 Investigators have uncovered problems at the brand new Broad Ripple parking garage, a project built with $6.35 million of the public's money. 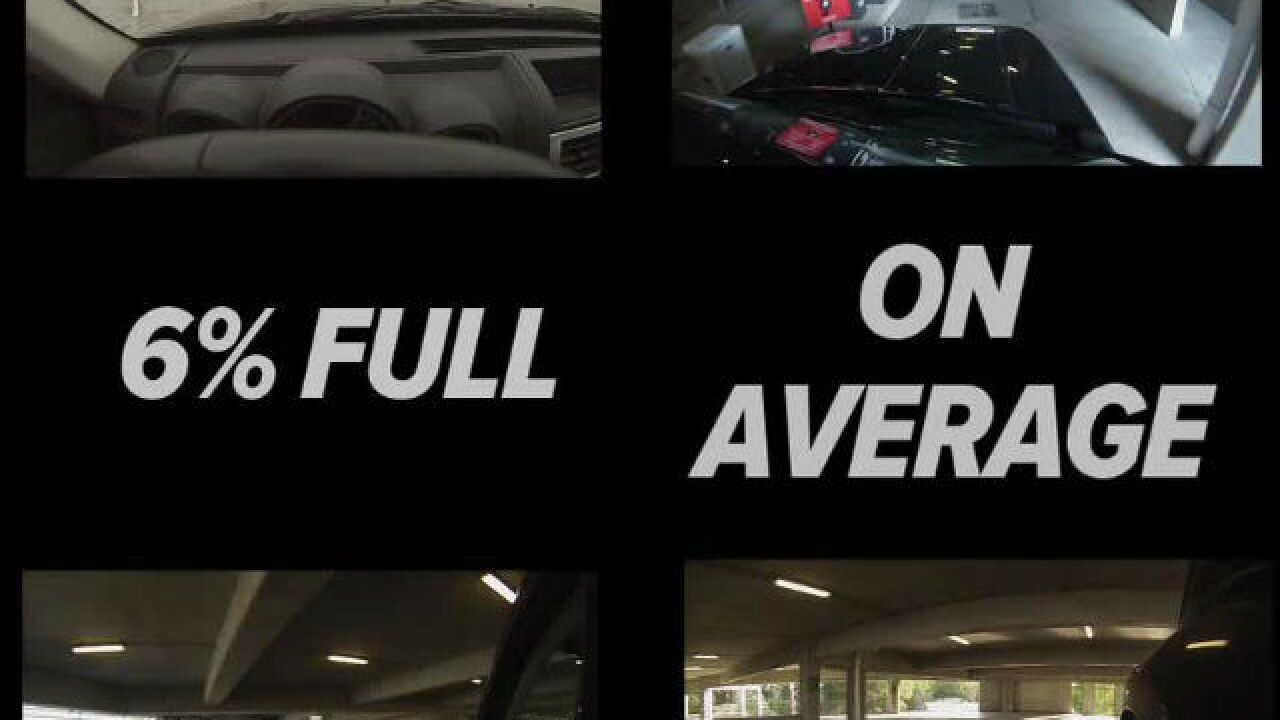 The Call 6 Investigators have uncovered problems at the brand new Broad Ripple parking garage, a project built with $6.35 million of the public's money.

Five months after opening, Call 6 Investigator Kara Kenney found the elevator not working on several occasions, water pooling in some areas days after rain passed and signs not up to city code.

The City of Indianapolis and garage owners and management, Keystone and Newpoint Parking respectively, would not release data showing how many cars have parked there.

So, the Call 6 team counted cars day and night throughout the fall and found of the 328 paid spaces in the garage, the structure was 5.5 percent full, on average.

If you count just the peak times, around 11 p.m. on Fridays and Saturdays, the garage was 19.8 percent full, on average.

Some argue the garage was a waste of public dollars.

"There's an old expression, 'We tried to tell you so,'" said Clarke Kahlo, one of the most vocal opponents of the garage. "I think the garage is floundering. It seems like a failure."

Kahlo said a surface lot of roughly 100 spaces would have helped alleviate parking issues without such a huge cost to the taxpayers.

The $6.35 million paid for by the City of Indianapolis came from the sale of the city’s parking meters to a private company, ACS/ParkIndy.

Kahlo took exception to the fact that neither the city nor parking management would release parking figures to the Call 6 Investigators.

"It's not morally correct," said Kahlo. "The public has a huge financial stake in this project."

In 2011, Mayor Greg Ballard announced the garage would be built to address parking problems for residents and visitors.

"One of the great things about the garage is it will allow for a residential parking permit program for the neighborhood," said Ballard. "Broad Ripple Village has long needed a garage of this magnitude to alleviate the parking issues.  Residents and their guests who have been asking for this for a long, long time will easily be able to find on street parking near their homes."

Getting cars off neighborhood streets and into the garage was also a big selling point mentioned at the May 2 ribbon-cutting.

"When they're going down the street to a restaurant, they're not parking three blocks deep into the neighborhood," Ballard said on May 2.

Five months after the garage opened, the Call 6 Investigators found people are still parking on residential streets on weekend nights, instead of pulling into the publicly funded garage.

"It's just kind of habit," said Nate Holm, as he and his friends parked on Guilford Avenue about 11 p.m. on a Saturday. "This is where I've come for four years."

"I’ve seen just as many (cars) as ever," said Nik Browning, who lives on Guilford, just off the Broad Ripple strip. "That's clearly because it's still free parking on the street."

Browning said he had hoped the new garage would cut down on the crowds on his street.

"I've definitely cleaned up cans of beer and shooed away some drunk people," said Browning.

Everyone has their own opinion about why not many people are parking in the Broad Ripple parking garage.

A 2007 study by Walker Parking Consultants found the site was not ideal because pedestrians have to cross busy College Avenue to get into Broad Ripple's main strip.

"Since it's at the corner of an intersection, it's kind of hard to pull in there sometimes," said Austin Kirch, who parked on Guilford on a Saturday night.

Cost is also an issue. Parking at a meter is 50 cents cheaper for the first hour, and some streets are completely free.

A residential parking permit program is still in the works, with the Broad Ripple Village Association analyzing survey data they gathered earlier this fall.

Currently, the only tenants are a Marco’s Pizza and Firehouse Subs.

Ballard joked about filling the space with Keystone’s CEO, Ersal Ozdemir, at the May 2 ribbon-cutting and news conference.

"I know something will be in here, Ersal, eventually right?" Ballard said at the podium.

The space where the ribbon-cutting was held, the north corner at College and Westfield Boulevard, is still empty and has yet to find a tenant.

"We don't know yet," said Mike Patarino, vice president of real estate for Keystone Realty in an email to Kenney. "We are talking to a lot of potential tenants."

Drivers also told the Call 6 Investigators they would park in the garage, but they had no idea how much it costs.

"They don’t have a lot of advertising for it," said Kashmere Johnston, who comes to Broad Ripple several times a week and has yet to park in the garage. "That's probably why people are not using it."

When Kenney checked in September, the garage had no signs outside telling people how much it costs to park there.

When the Call 6 team started asking questions about the signs, the parking manager, Newpoint Parking, moved signs to the entrances, including one that had been posted inside the garage by the ticket machine.

City code enforcement says the signs were not up to code because the letters were smaller than six inches.

"They do not have the proper sign that we want to see outside," said code enforcement spokesman Adam Baker. "If they have a sign they can read that's easily visible from the street, then citizens aren't going to back up traffic as they slow down to determine whether they're going to choose that garage as their parking. The letters are not big enough."

Newpoint Parking declined to speak with Call 6 for this story and referred questions to Keystone.

Keystone Realty is the developer of the garage, Keystone Construction built the garage and Keystone also owns the garage through a holding company called 6280 LLC.

The Call 6 Investigators also found the elevator not working on several occasions and water pooling in some areas, days after rain had passed.

Because $6.35 million in public money went into the garage, the Call 6 Investigators requested an interview with Ballard, but his office declined.

Kenney caught up with him at a public event and asked if he was aware of the problems at the garage.

Kenney also asked about why so few people are parking there.

"Everything takes a little time to work out. I certainly remember a few months after the Super Bowl where people were saying, 'Georgia Street, what's that?' But now, lots of people are using Georgia Street," said Ballard.

Patarino said the elevator, concrete and signs have been fixed.

The Call 6 team saw construction crews working inside the garage at the end of October.

Patarino said he could understand why some people weren't parking in the new garage.

"Oh absolutely," he said. "Having the rate signage at the street on College and one on Westfield, I'm hoping that increases the number of people parking in the garage."

Patarino said his company would not release the parking counts or parking revenue figures.

"That type of information we feel is confidential, and we feel it's trade-type information,” said Patarino. "We would not release that at this time."

As for the empty retail spaces, Patarino said Orange Leaf, Massage Envy and a sushi restaurant will move into the garage soon.

"It will be more profitable as we have more parkers in there and as our retail spaces get filled out," said Patarino.

Even though the city invested nearly $6.4 million, it gets none of the parking revenue.

Keystone and its top managers have donated about $30,000 to Ballard’s campaign, records show.

Paul Okeson, Ballard’s former chief of staff, is the vice president of business development for Keystone.

Patarino denied the Broad Ripple parking garage was a sweetheart deal for a campaign contributor.

"We answered a public RFP (request for proposal), and it was competitive," said Patarino. "We were competitive, and we provided the best solution for the area."

Some people are questioning whether the garage is a boon to the city, or a boondoggle.

"I honestly think it was a waste of money, a waste of space," said Kashmere Johnston.

Another one of the garage's selling points was a substation for the Indianapolis Metro Police Department, but the substation has yet to open.

"They have started moving furniture into the building and are waiting for some other IT work to be completed," said IMPD spokesman Lt. Chris Bailey in an email to RTV6. "The final move-in is dependent on the IT work being completed so that the officers can do their work."

At Kenney’s request, Bailey provided crime statistics that show a 38 percent reduction in crime in Broad Ripple from May-July 2012 compared to May-July 2013.

Bailey credited added Monon patrols, Crime Watch efforts and partnerships with businesses as reasons for the drop, but did not list the opening of the Broad Ripple parking garage in May 2013.

The city received $20 million for the sale of its parking meters to ACS/ParkIndy.

Here’s a breakdown of how those dollars have been spent, according to the Department of Public Works:

Click here to view inspection reports for the garage.

Click here to see how the parking meter deal dollars were spent by the city.