Has history of traffic violations 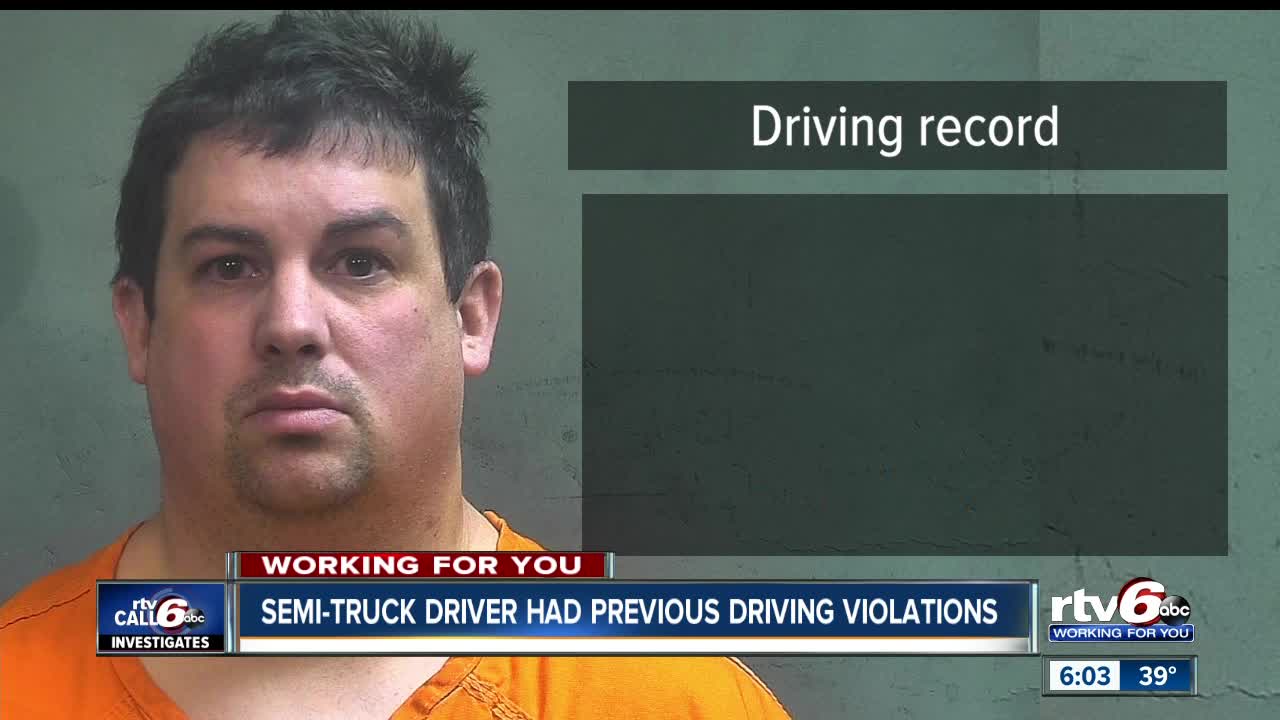 A semi-truck truck driver arrested in connection with a crash on Sunday on Interstate 65 that left two women and a baby dead has a history of traffic infractions, Call 6 Investigates has found.

LEBANON — The driver of the semi-truck arrested in connection with a crash on Sunday on I-65 that left two women and a baby dead faces three charges of Reckless Homicide.

A Call 6 investigation found that Small, from Grandville, Michigan, has a history of traffic violations.

Small received an infraction in Carmel on July 8. 2019 for following too closely in a truck.

Small has also been cited for his driving several times in Michigan, records show.

In 2002, Small was convicted of reckless driving in Branch County and received a $325 fine and six months of probation.

In 2004, he was cited for driving on a suspended licensed in Branch County and pleaded no contest, and was sentenced to a $200 fine.

Both the 2002 and 2004 incidents involved Small driving a passenger vehicle, according to the Branch County court.

In 2013, Small was involved in a crash in a passenger car and was cited for failing to stop within assured clear distance, according to Small’s Michigan driving record.

Also in 2013, he received a speeding violation for going 45 mph in a 35 mph zone in a car, Michigan records show.

In 2014, Small received a driver improvement letter from the state of Michigan, which is correspondence that warns drivers of unsafe driving habits.

Also in 2014, Small was cited for failing to stop while leaving an alley or private drive while driving a pickup truck, records show.

In 2015, Small was cited for speeding in Michigan after he was involved in a crash in a passenger car.

In 2017, Small was ticketed for speeding in the Grand Rapids area in a passenger vehicle.

In May 2019, Small was cited for speeding in a commercial vehicle while in Ohio, according to his driving record.

Small asked the Boone County Sheriff's Office to release the note in the image below:

RTV6 left messages with the trucking company, VL Trucking, and we are still waiting to hear back.

Small told police he was driving northbound on I-65 near the 129 mile-marker and looked away from the road to set his coffee mug down when he ran into slowing traffic, according to a release from the Boone County Sheriff's Office. Authorities believe Small collided with eight vehicles as he drove through the back-up.

The sheriff's office said 14 other people suffered non-life threatening injuries. Thirteen people were transported to St. Vincent's Hospital and a girl was taken to Riley Hospital for Children.

Thank you for being patient with us during this investigation. I have spoken to both families personally and we are working on helping them through these difficult decisions that they must make for their loved ones. I have also spoken to Mr. Small. He is very regretful and upset for what happened and wanted me to relay the information on this handwritten note. There are many aspects of this crash that will be looked into including videos that may exist, device data, forensic analysis, autopsy results, blood work results, etc. This is all part of a detailed investigation and our FACT Team, along with our criminal investigation division, does an excellent job in investigating these types of crashes. We will also be looking at other factors in our investigation such as why the traffic was backed up and in a Que on northbound I-65. Although this is a very tragic event, it will take us time to complete a detailed reconstruction of this crash. Please continue to think about and pray for all of these families as they walk through this difficult journey.