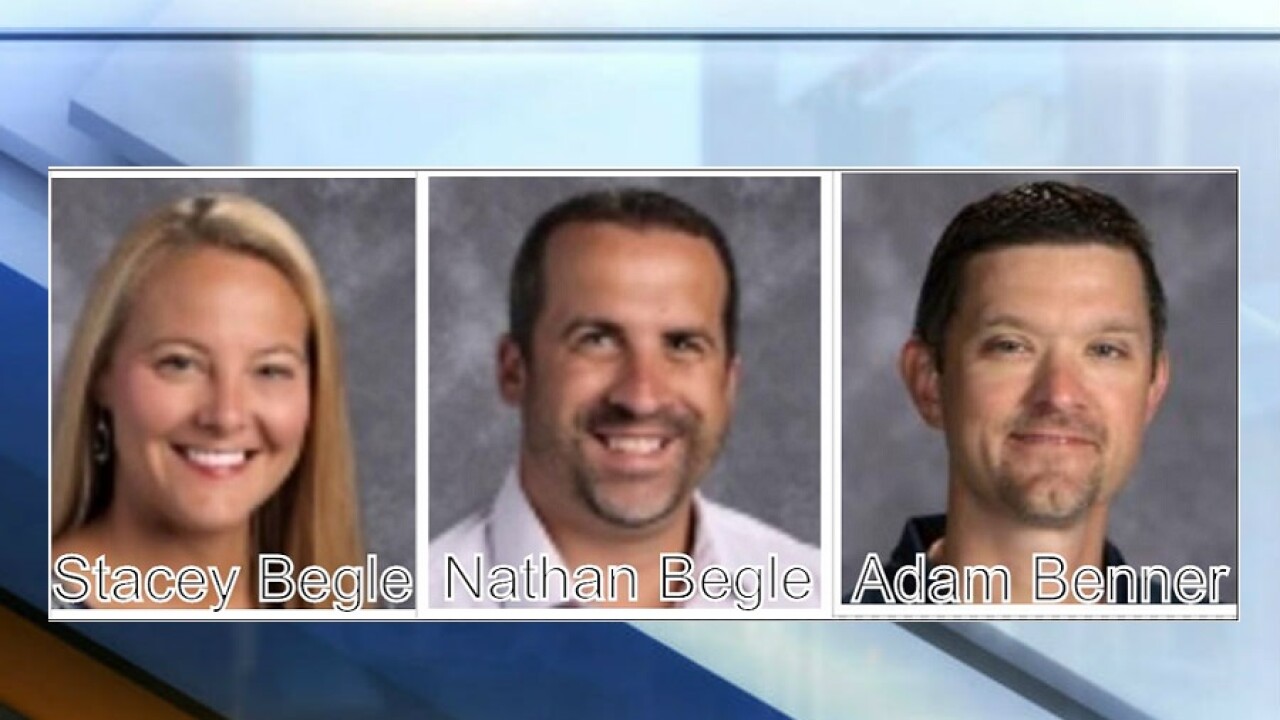 UPDATE: The North West Hendricks School Corp. on Friday released a statement saying Nathan Begle and Stacey Begle have been placed on administrative leave from the district because of the Indiana Department of Education seeking to suspend their teaching licenses.

The complaints allege Tri-West High School dean of students Stacey Begle, athletic director Nathan Begle and then-principal Adam Benner became aware of allegations involving Bruce in February 2019 and “internally looked into the matters but never reported the alleged inappropriate behavior to the Department of Child Services or law enforcement, as is required under (Indiana code).”

The tips that were received by the school included information that Bruce was in a “secret relationship of a sexual nature with a female student,” according to the complaint.

Benner and the Begles became aware of even more information in May 2019 and did not report any of those allegations as is required under Indiana code, according to the IDOE complaint.

The Indiana Department of Education is seeking Nathan and Stacey Begle’s teaching licenses both be suspended for two years.

No word yet on when a hearing will be held on their licenses.

The district issued the following response on Thursday:

North West Hendricks School Corp. received notification today from the Indiana Dept. of Education that the department is taking steps to suspend the teaching licenses of Nate Begle and Stacey Begle. Both are currently employed at Tri-West High School pending any change in their Indiana certification.

The Indiana Department of Education may at the discretion of the state superintendent revoke or suspend the license of a person who is known to have “committed acts or have convictions for offenses that may involve immorality, misconduct in office, incompetency, or willful neglect of duty.”

The Begles are both still employed with the North West Hendricks School Corporation and have not been criminally charged.

Adam Benner resigned from Tri-West in June just as the criminal investigation into Bruce was just beginning.

Benner and the Begles have not responded to inquiries from Call 6 Investigates.

Prosecutors criminally charged Benner with failing to properly report allegations of child abuse or neglect as required by Indiana law.

Benner is due in court on March 23, records show.

Benner was made aware of the allegations in February 2019 after a report that Bruce and the student were working out alone together in the weight room, court records show.

At a March 1 meeting, Benner told other administrators that any further information regarding Bruce and the 17-year-old should be sent directly to him, court records show.

The Indiana Department of Education filed a formal complaint against a Tyler Bruce’s teaching license back in September, and that is still pending.

Tyler Bruce’s trial is scheduled for April 22. He is currently on unpaid suspension with the district.

IDOE became aware of allegations of Bruce’s inappropriate relationship with a female student including interacting with her on SnapChat, read the complaint.

“He admitted he needed to talk to her after his wife went to bed and picked SnapChat since there would not be proof,” read the Indiana Department of Education complaint against Bruce. “She eventually complied with his requests and sent naked images, after his repeated requests and threats that her grades would be impacted if she didn’t.”