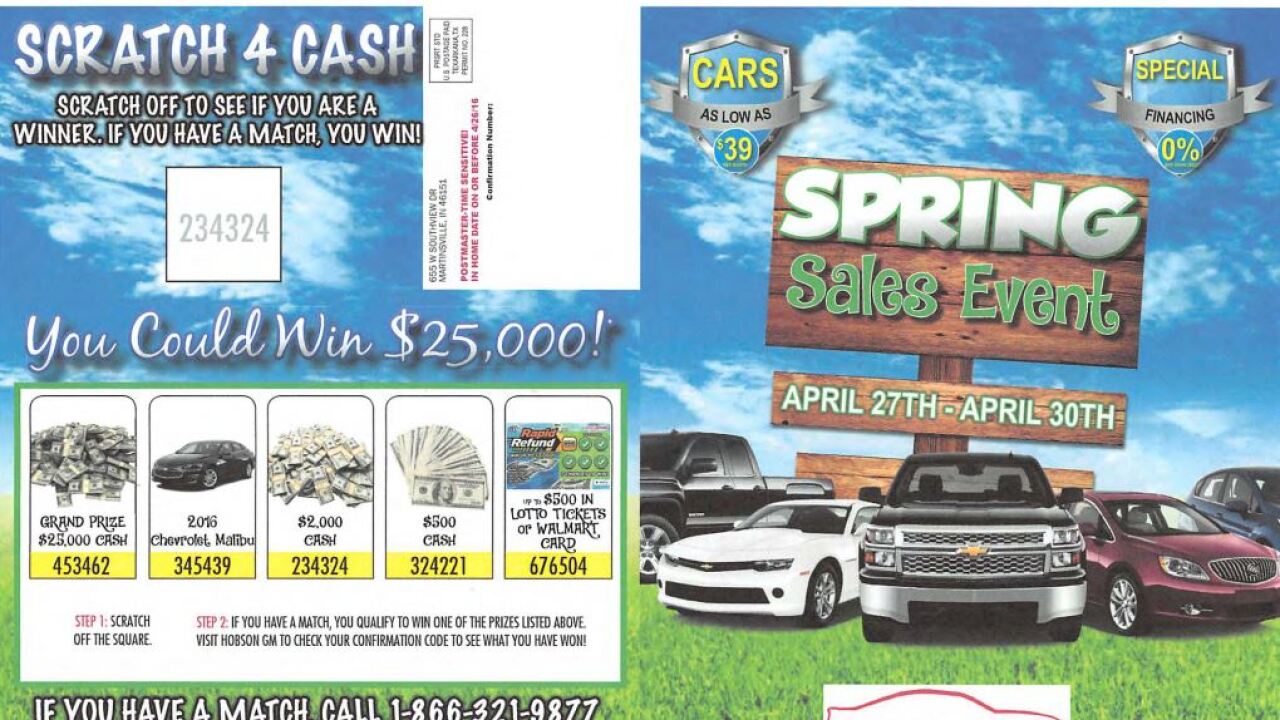 Copyright 2019 Scripps Media, Inc. All rights reserved. This material may not be published, broadcast, rewritten, or redistributed.
Kenney, Kara

The lawsuit filed April 4 in Morgan County alleged Hopkins and Raines Inc. sent mailings to 2.1 million Hoosiers as part of 56 different promotions for car dealerships in Indiana between March 2016 and March 2018.

The state alleged the mailings told recipients they won significant prizes when they had not, and when the “winners” went to dealerships to claim their prizes, the awards were much less valuable than those advertised—a cheap MP3 player, a scratch-off lottery ticket or a $5 Walmart gift card.

Call 6 Investigates placed a phone call to Hopkins and Raines in Texas on Monday, and the person who answered the phone said they were unaware of the lawsuit.

As Call 6 Investigates reported in January, a Marion County judge slapped Texas-based Prophecy Marketing with a $140,000 judgment for “deceptive” mailers sent to 70,000 Indiana consumers following a lawsuit from the Attorney General.

“Always be skeptical of anything that seems too good to be true,” Attorney Curtis General Hill said. “Typically, the announcement that ‘you’re a winner’ is merely a ploy to entice you to go listen to someone's sales pitch. We want Hoosiers to be alert to all varieties of misleading advertising so they can avoid wasting their time or, even worse, getting talked into making ill-advised purchases.”

In the lawsuit, Attorney General Hill alleged the real reason for the mailing was to lure recipients to events where they would be exposed to sales pitches for vehicles.

The state also claimed mailings violated the Promotional Gifts and Contests Act due to the following:

If you believe you have been the victim of any type of scam or attempted scam, file a complaint at indianaconsumer.com [links.govdelivery.com] or call 1-800-382-5516.