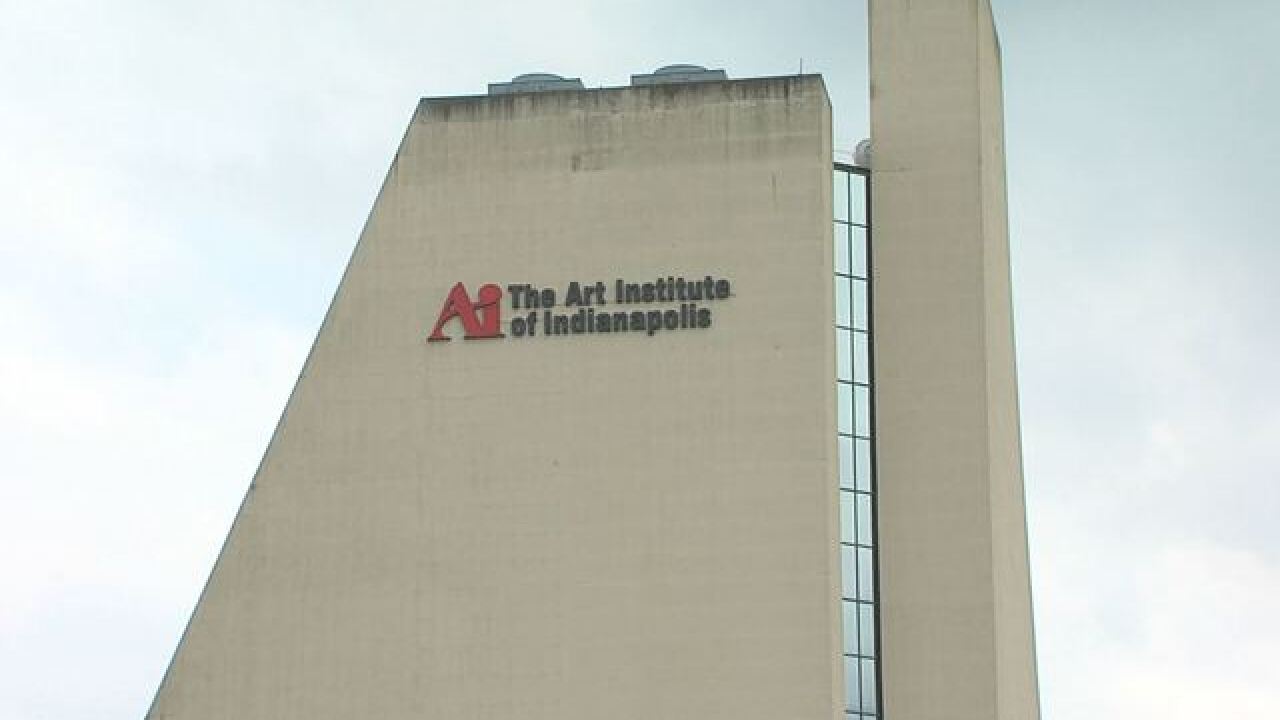 INDIANAPOLIS— Students at the Art Institute of Indianapolis and their families say they’re still left with questions two weeks after the school announced it was halting new enrollments in Indianapolis and closing campuses across the country.

Hannah Williams told Call 6 Investigates students showed up for class to locked doors and the school had no employees on hand to answer questions.

Williams received an email on July 2 from the Art Institute.

“We regret to inform you that your July class start date is not available due to an insufficient number of enrolled students,” the email from the Art Institute read.

The email said students have other options, including enrolling online at a 50% discount.

“If you decide to pursue your education at a different Art Institutes location, you will receive a 50% reduction on your tuition,” the email read.

Students have also expressed difficulty in reaching school staff at the phone number provided in the email.

When Call 6 Investigates called the number Friday, it said they were experiencing high call volume.

“These students are left wondering what is happening with their futures and all the money that has gone in to financing their education,” Williams said.

Students and parents have expressed frustration at the apparent lack of communication regarding classes.

A parent contacted Call 6 Investigates saying her daughter was supposed to move in to her apartment on July 5 to start classes at the Art Institute.

“We didn't even receive as much as an email informing us of the situation,” the parent said. “They are offering online classes for these kids. How can you complete a fashion design program online!? No explanation of why we weren't informed. “

Call 6 Investigates contacted Art Institute spokeswoman Anne Dean, who said she could not provide specific information on the number of students that were scheduled to start classes.

“We have reached out to, and continue to reach out to, impacted prospective students and their families,” Dean said in an email to RTV6. “For applicants to the impacted schools who have been accepted but are not yet attending, we will offer a 50 percent reduction in tuition to attend their chosen program of study online or at another DCEH (Dream Center Education Holdings) campus. Should they choose not to do so, any monies they have paid to us to date will be refunded.”

Dean said the decision to halt enrollment in Indianapolis was made for a number of reasons, “including a shift in the demand for online programs in higher education and in student populations at the campuses, which have resulted in declining, unsustainable enrollment levels for campus-based programs in these markets.”

Dean said these options are available to current and prospective students.

“Students at the majority of impacted locations will transition to their chosen transfer option by the end of the calendar year,” Dean said. “We will be working with students to decide their next course of action on a case-by-case basis, as soon as possible.”

Options for students include:

Dean has not responded to three emails from Call 6 Investigates asking how many employees have been laid off or terminated from the Art Institute campus in Indianapolis.

As Call 6 Investigates has reported, the Art Institute of Indianapolis is facing accreditation issues due to a lack of job placements and is no longer accepting new students.

The north side school offers programs in fashion, culinary, visual design, interior design, film & production and has an enrollment of more than 900 students.

The Art Institute of Indianapolis was hit with a compliance warning from the Accrediting Council for Independent Colleges and Schools (ACICS) for not placing enough students in jobs.

The council’s standard is a 60% job placement rate, where the Art Institute of Indianapolis’ rate is 53%, records show.

ACICS said it is giving the campus 24 months to come into compliance or it could risk losing its accreditation.

Former students Call 6 Investigates spoke with say they’re not surprised at all by the compliance warning.

Toni Clark is working as a bartender, supporting a baby boy, despite attending the Art Institute from 2008 to 2011.

She’s had difficulty getting a job in fashion.

"They do tell you we'll place you in a job, you don't ever have to worry about that,” Clark said. “Once you graduate, then you're good to go and it's unfortunately not like that."

Just months from graduation, Clark had to drop out after she had trouble getting a loan.

"It's really hard because the loans have gotten so intense throughout my entire 20’s essentially,” Clark said. “It's really held me back. If there was a big regret I've ever had in my entire life, it's going there."

Indianapolis resident and Art Institute graduate Casey Cooper is also in debt--- $100,000 in the hole.

He got his fashion design degree from the Art Institute in 2013, but he’s never been able to find a job in the field.

"I'm not surprised (at the compliance warning), and I’m surprised that AI has that high of a placement rate,” Cooper said. “It's sad because a lot of students are wanting to go into these fields and get these jobs and they end up confused.”

Cooper said you should do your research before choosing a school, including how it will help you get a job in your field.

"Look at other students enrolled and students who have attended, because that's where you're really going to find the truth about the education," Cooper said.