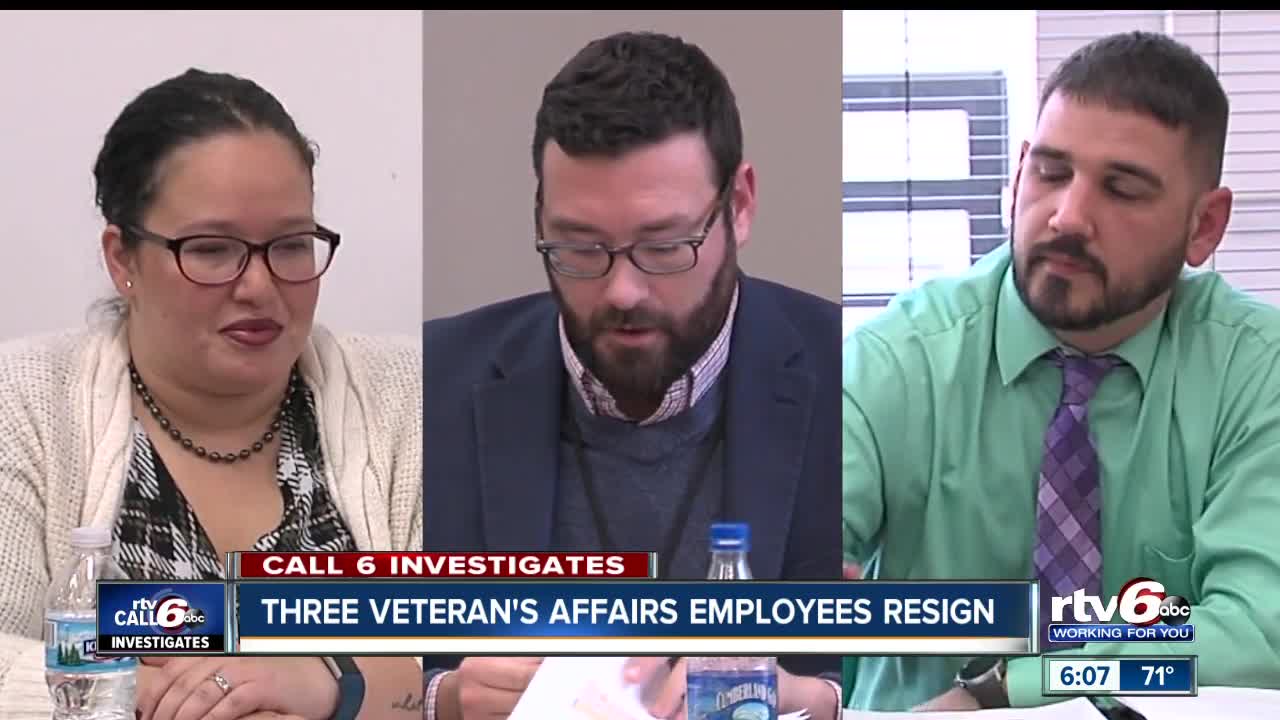 Three more employees at the Indiana Department of Veterans Affairs have resigned their positions following a Call 6 Investigation into misuse of the state’s specialty license plate revenue meant to help struggling veterans. 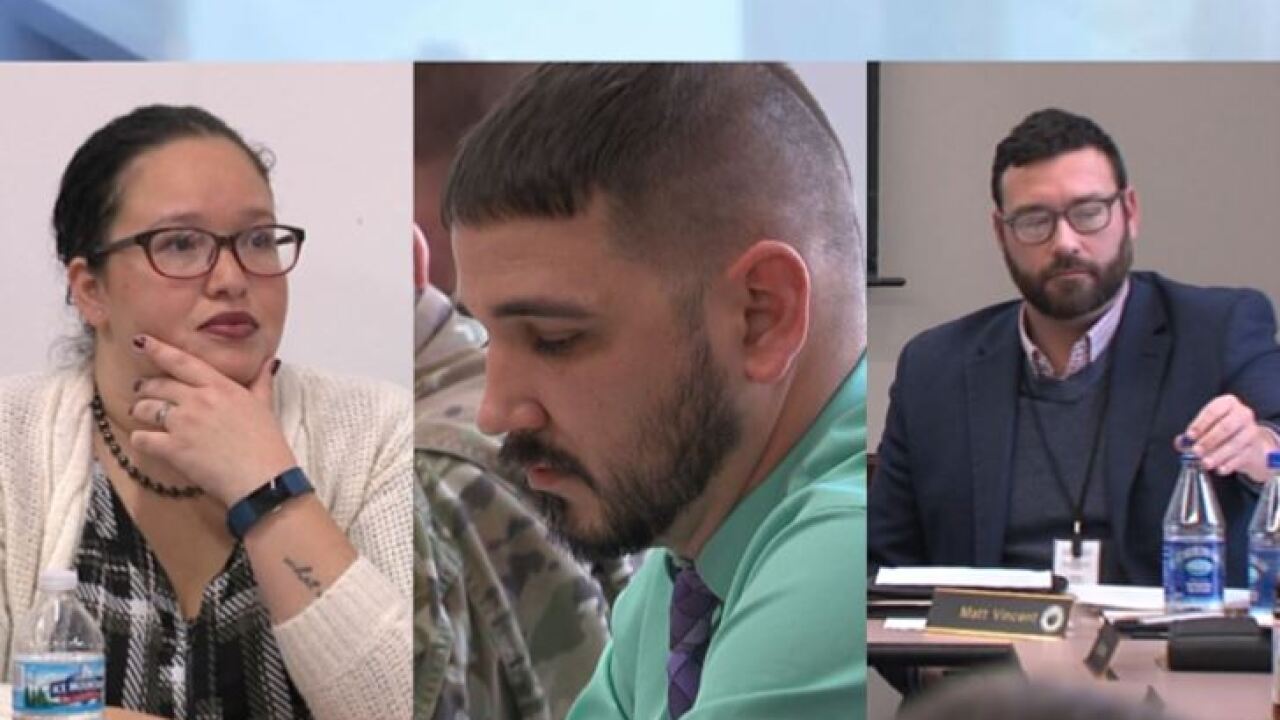 INDIANAPOLIS — Three more employees at the Indiana Department of Veterans Affairs have resigned their positions following a Call 6 Investigation into misuse of the state’s specialty license plate revenue meant to help struggling veterans.

Veterans have criticized the three agency leaders for their roles in the scandal surrounding the Military Family Relief Fund, first uncovered by RTV6 in November 2018.

“I have had the honor to serve the veterans of Indiana for six years and couldn’t have asked for a more meaningful stepping stone in my career,” Vincent said in his resignation letter to Governor Holcomb. “I look forward to seeing the good things to come from the department and the new leadership.”

IDVA communications director Adryanne Bonner resigned her position on May 6.

“I am submitting my letter of resignation so that the agency can move forward to positively impact and regain the trust of veterans,” Bonner said in her letter.

Records obtained by RTV6 show Bonner and her boyfriend received thousands of dollars in federal welfare benefits administered by IDVA including child care and therapeutic horseback riding lessons for their dependent son.

A state audit released in April questioned the Indiana Department of Veterans Affairs spending of more than $700,000 in federal funds meant to help struggling veterans.

The audit focused on IDVA’s use of TANF or Temporary Assistance for Needy Families, or federal money meant to help needy veterans with employment, training and counseling.

The State Board of Accounts audit found IDVA did not have internal controls in place to ensure the state spent the TANF funds in accordance with federal regulations.

IDVA’s director of veteran and employment and outreach Jeff Wirt submitted his resignation the same day, on May 6, and his last day is June 14.

In his request for funds, Wirt said his monthly income was $2,700 and that he had encountered financial hardship.

“Most recently, I blew two tires on my primary vehicle, which will need to be fixed,” read Wirt’s request for funds.

“Grants up to $2,500 may be awarded,” read the agency’s website. “The qualified individual or family member can receive up to $2,500 one time from the Family Relief Fund.”

Since Brown’s resignation, numerous veterans including Lisa Wilken and Brigadier General James Bauerle have called for the replacement of other top IDVA officials.

“I believe they should have been fired,” Wilken in response to the resignations of Vincent, Wirt and Bonner. “If you’re resigning because of wrongdoing, it should be effectively immediately. I’m disappointed that this was their own choice.”

“I’m glad that these resignations were accepted but I’m disappointed none of the people that need to be held accountable have been held accountable by the administration,” Wilken said. “There has been no action by the governor on this wrongdoing.”

Gov. Eric Holcomb directed Wimer to “make any and all necessary changes to restore the confidence of the department and the trust of Hoosier veterans.”

Call 6 Investigates reached out to IDVA director Dennis Wimer on Tuesday regarding the resignations.

“As I’ve shared previously and publicly, I began working to reorganize the IDVA on March 1,” Wimer said in a statement to RTV6. “I’ve been meeting IDVA employees over the last few days to discuss personnel changes and the process we will follow to restructure the department. I will be working with each staff member on their role and function within the newly reorganized structure. Once complete, we’ll make the organizational chart public on the IDVA website.”

Wimer said men and women who served or are serving our country deserve a diligent, thoughtful approach to employment decisions.

“I will not rush the process, as quick decisions aren’t always the right ones,” Wimer said. “We want to assure the public we are setting IDVA up to be the best department to serve our state’s veterans.”

Call 6 Investigates has also learned this week the Marion County prosecutor’s office has launched a criminal investigation to review whether anyone in IDVA violated any laws.

“We have opened an investigation into the matter," said Marion County prosecutor Terry Curry's chief of staff, Peg McLeish.

A recent Indiana Inspector General investigation found “a significant need for improved policies and practices” and said it found insufficient evidence to support either criminal charges or an ethics complaint against any current or former IDVA employees including former IDVA director Jim Brown.

Gov. Eric Holcomb recently signed a bill into law that strips IDVA of its authority to approve grants for its own employees.

Under the new law, the MFRF benefit is capped at $2,500, but the Indiana Veterans Affairs Commission can evaluate a veteran’s request for benefits beyond the fund’s $2,500 limit.

The new law, which takes effect July 1, also requires the state to approve or deny applications for the Military Family Relief Fund within 60 days.

The Indiana State Board of Accounts has released several audits since our investigation aired which have criticized the agency’s bookkeeping and lack of internal controls.

Another audit questioned the Indiana Department of Veterans Affairs spending of more than $700,000 in federal funds meant to help struggling veterans.

The audit focuses on IDVA’s use of TANF or Temporary Assistance for Needy Families, or federal money meant to help needy veterans with employment, training and counseling.

In 2015, IDVA and the Indiana Family and Social Services Administration (FSSA) reached an agreement to provide $2 million in TANF money to Indiana veterans and their families.

The State Board of Accounts audit found IDVA did not have internal controls in place to ensure the state spent the TANF funds in accordance with federal regulations.

State auditors repeatedly found no documentation for military members and their families who received therapy and counseling services.

In one example, veterans’ children received $2,326 in speech therapy and tutoring, but the state did not have documentation explaining how the services supported a TANF purpose.

The SBOA also questioned expenses surrounding several couples retreats at French Lick Resort and Oakwood Resort which was part of the Warrior to Soul Mate program through the U.S. Department of Veterans Affairs.

The audit found IDVA paid for couples’ rooms and meals, but could not provide a reason why the service was needed.

State auditors also found most childcare vouchers lacked documentation to support the childcare was provided while the veteran attended training classes or looked for meaningful employment, which was required as part of the agreement with FSSA.

The SBOA questioned $56,269 in child care related expenses, saying it did comply with the state’s agreement.

The state auditors also questioned $688,913 paid to contracted workers, saying IDVA could not provide documentation showing the work was for TANF purposes.

The Indiana State Board of Accounts has asked FSSA to follow up on each item to verify if it was an permissible expenses and seek reimbursement from veterans who received services that were not allowed.

In response to the audit, FSSA submitted a follow-up action plan and is working to identify veterans who received questionable expenses.

FSSA also plans to hold an organization meeting, write a project plan and execute the project.

“The Division of Family Resources remains committed to using all funds, including TANF federal funds, to pursue the purposes for which they have been allocated,” read FSSA’s response.