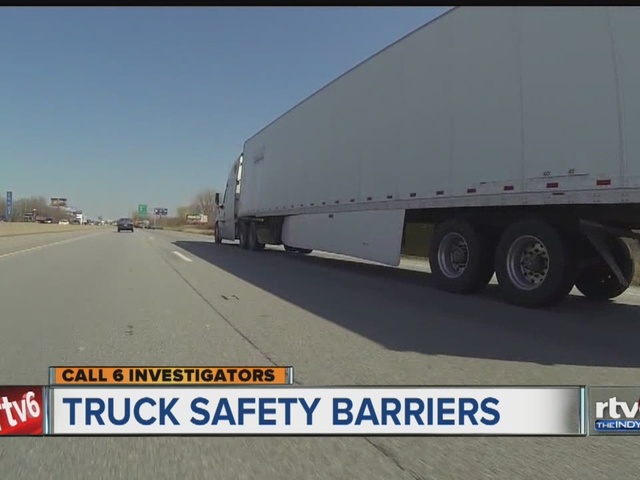 Chances are you've never noticed underride guards, the metal barriers on the back of most large trucks designed to keep drivers from sliding underneath during a crash. 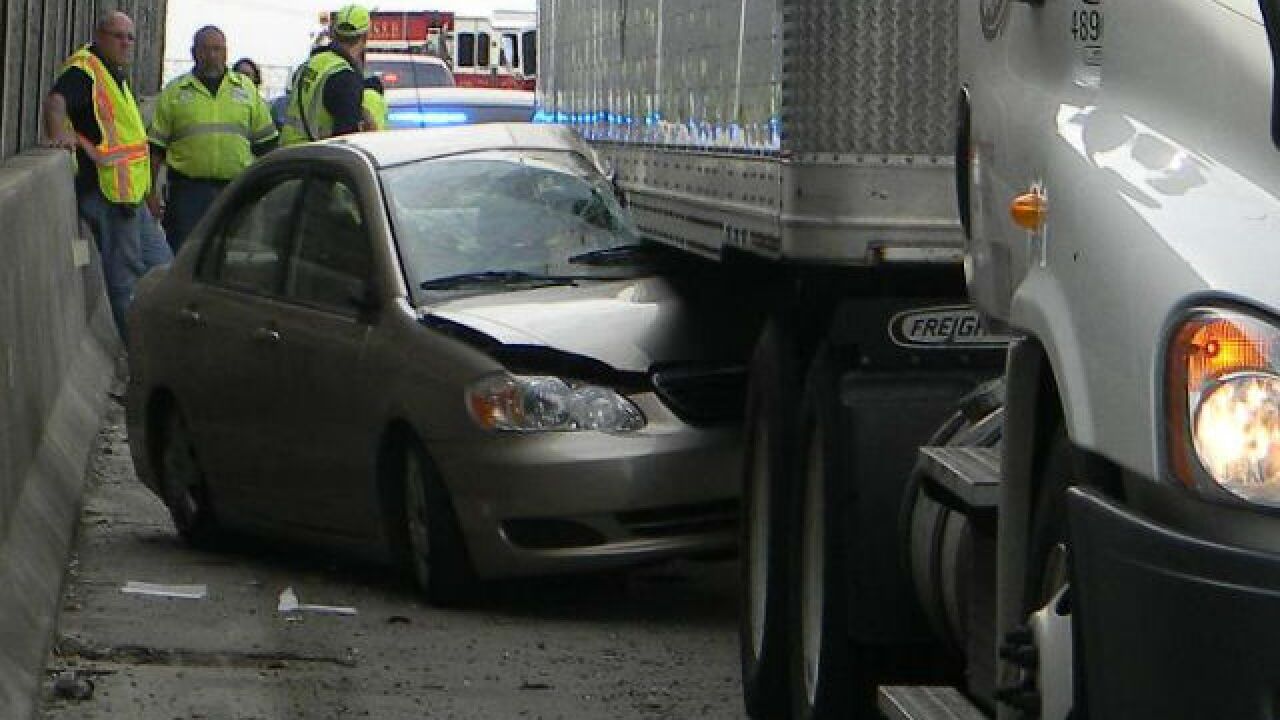 Chances are you've never noticed underride guards, the metal barriers on the back of most large trucks designed to keep drivers from sliding underneath during a crash.

But a three-month investigation by the Call 6 Investigators reveals federal standards for underride guards may not be enough to keep motorists safe.

"A standard car coming in at 25 mph has more force, more momentum than these guards can withstand," said Bruce Enz, a national crash analyst based in Indianapolis. "The guards just collapse and bend under."

The Insurance Institute for Highway Safety is critical of the federal government for being slow to improve standards for underride guards.

In 2011, 260 people were killed when they crashed into the rears of trucks, according to IIHS statistics.

IIHS performed crash tests that found guards fully intact and up to date can still fail and kill.

Inspection reports show companies, including more than a dozen from Indiana, with underride guards that are bent, broken, missing and even held up with a bungee cord.

"Many times, a guard will fail because of poor maintenance, poor repair, or it's just been ignored," said Enz, who has investigated more than 7,000 crashes and performed dozens of his own crash tests.

Enz is among critics who argue that even though rear underride guards are required by federal law, the standards aren't strong enough to prevent death and injuries, even at low speeds.

"It's really the most horrific crashes you could be involved in," said Enz. "Often, the skull is crushed and it's often decapitation."

Enz pointed out that Canadian underride guards are 1.75 times stronger than guards in the United States.

Side guards not required in United States

Side guards are not required at all in the United States, even though some countries do have them.

Bill Hutchins, of Hobart, became pinned underneath the side of a truck as he was attempting to merge onto Interstate 65.

"I thought I was dying," said Hutchins, who was dragged for several miles. "It was a hideous sound, the shattering of the glass."

Hutchins survived, but with neck and back problems.

"I can't mow the lawn. I can't do anything," said Hutchins.

Enz said Hutchins' injuries may have been prevented if federal law required side guards on trucks.

"Right now, you see them in Australia, New Zealand, Japan, China, Europe," said Enz, who has designed and tested side impact guards.

IIHS contends that side guards have the potential to save lives.

An IIHS analysis of crashes in which vehicles hit the side of large trucks found that out of 143 crashes in which the truck side impact produced the most severe injury, more than half would not have been as severe if there had been side guards on the truck.

"(A side guard) would have changed the whole accident," said Hutchins, who wasn't ticketed in the crash, though police said he failed to yield to the truck.

Indiana State Police inspectors and troopers check to make sure guards are the right height and width, but they can't test it to see if the guard will hold up in a crash.

"We don't have any equipment that's going to test the durability or strength of construction of those bumper bars," said ISP First Sgt. Ty Utterback.

Records show ISP has handed out more than 60 violations in the last few years for inadequate guards, including guards that are bent, broken, missing or held up with a bungee cord.

As Call 6 rode along with Utterback, he issued a citation to truck driver Chris Cossell, of Indianapolis-based demolition company Casey Bertram, for failing to have his guard in the correct position.

"I thought it was low enough to be OK," said Cossell, after receiving the ticket. "I'll get that fixed."

Later, the company told Kenney it was not aware the bumper was in violation.

"We have since removed the old bumper and installed a new one," said Rodney Bertram in an email to RTV6.

The Call 6 Investigators also spotted a mangled, rusted, bent bumper on a truck driving on Interstate 465, but the Minnesota-based driver did not want to talk.

"Stop filming me!" the driver said emphatically. "Stop following me!"

Indiana State Police confirmed the trucking company, Lee Express of Eden Prairie, Minn., was in violation of the law, but troopers could not ticket the driver because he was parked on private property. Calls to Lee Express were not returned.

The Call 6 team found that trucking companies cited for inadequate guards can drive away and still remain on the road, but the driver usually has to pay a fine of about $150.

In March 2013, the IIHS released a study that showed while trailer manufacturers are making improvements to underride guards, most trailers still fail to prevent potentially deadly underride in crashes involving a small portion of the truck's rear.

The institute petitioned the National Highway Traffic Safety Administration in 2011 for tougher standards.

While the NHTSA hasn't formally responded to the petition, NHTSA told the Call 6 Investigators earlier this month that more stringent regulations could be on the way.

NHTSA released a study that evaluated both side and rear underride crashes and plans to use that information when making changes to federal guidelines.

"Moving forward, results from the field analysis, IIHS’s tests, international standards and other data will be leveraged by NHTSA and may inform potential changes to existing federal safety standards - including more stringent rear-impact guard requirements - based on what all the data show," wrote David Strickland, NHTSA administrator, in an email to the Call 6 Investigators. "NHTSA has research underway that would raise the bar on safety for large trucks—such as the potential use of crash avoidance technologies, new measures to improve the crash safety of truck cabs, among other efforts."

Hutchins hopes the changes include side-impact guards that might have stopped him from going underneath a truck.

But for millions of Hoosier drivers, the deadly danger still remains, whether they notice it or not.

If the NHTSA creates new standards, it could be expensive for the trucking and trailer industries, and some argue tougher guards are not even the answer.

"This type of accident usually involves serious driver error, so the Truck Trailer Manufacturers Association notes first that the rules already in place to prevent these accidents must be followed, including regulations against speeding or driving while impaired or distracted," said Jeff Sims, TTMA president, in an emailed statement to RTV6. "Proper maintenance of vehicle lighting equipment is also critical, both for passenger vehicle headlights and trailer tail lights and reflective tape."

"A neck strain could become a neck fracture as a result," said Sims.

The American Trucking Associations said the focus should be on preventing crashes in the first place through driver education and collision avoidance technology in cars and trucks.

"Many studies show that as many as three in four fatalities involving cars and trucks are unintentionally initiated or caused by the driver of the car," said Sean McNally, press secretary for ATA, in an email to RTV6.  "Trailers have a significant – as much as 10 years – lifespan, so new regulations would likely take some time to have an impact. In the meantime, we continue to believe the best underride guard in the world cannot prevent a crash and we should focus on preventing crashes as a first step to real safety improvements."