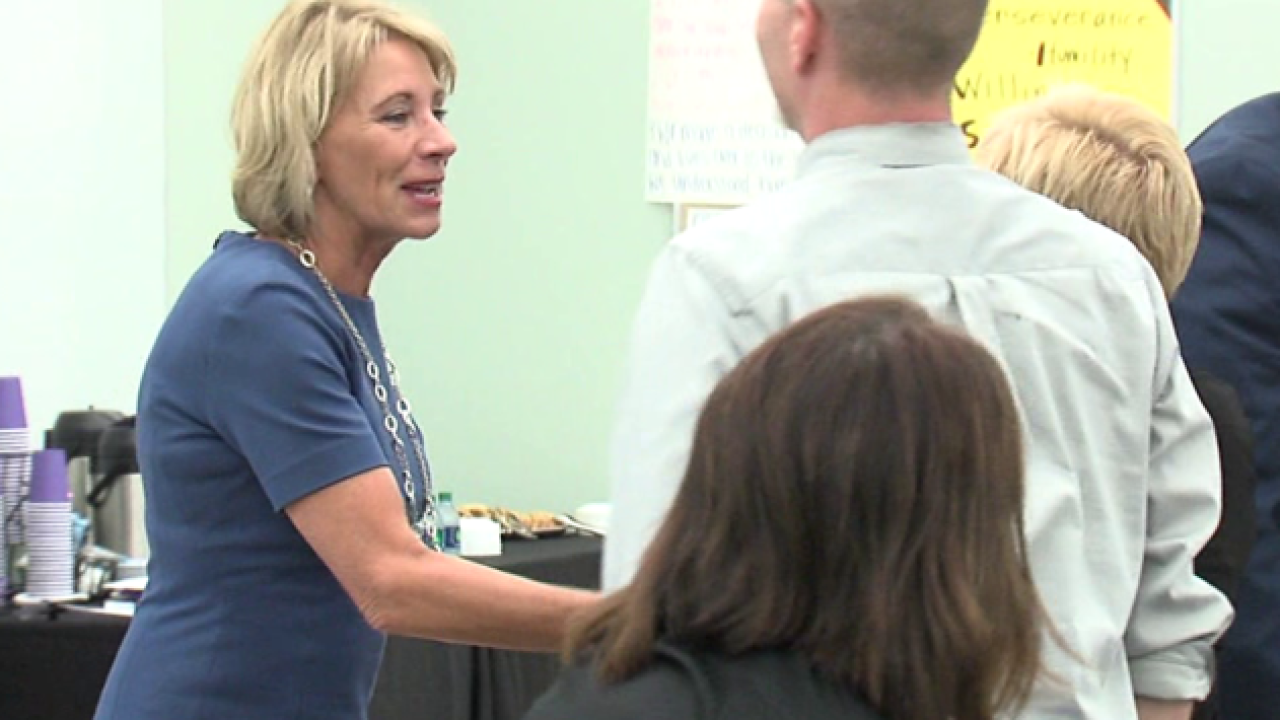 INDIANAPOLIS -- U.S. Education Secretary Betsy DeVos said the federal Office for Civil Rights “can do better” when it comes to long investigation times for sexual misconduct cases at Indiana colleges and universities.

Call 6 Investigates asked DeVos about lag times at Indiana institutions during her tour of Indiana schools on Friday.

“The current approach and the current system is not working for far too many students, and it’s not working for the institutions that are actually charged with seeing these things through,” said DeVos.  “We are really committed to approaching this carefully and thoughtfully.  We need to bring all the interested parties and experts together to talk about how we can do better on behalf of all students.”

College students and universities in Indiana have complained to Call 6 Investigates about delays in Title IX investigations, as well as understaffing at the U.S. Office for Civil Rights.

For example, the feds launched a compliance review at Indiana University Bloomington in March 12, 2014, but the case is still open and unresolved.

The feds are also still investigating a Title IX complaint filed by former student Hailey Rial, who said she was sexually assaulted at an off-campus fraternity recruiting event IU's Bloomington campus in August 2015.

“Any sexual assault is one too many, and I really credit the last administration for bringing this issue to light,” said DeVos. “We’re never going to sweep this under the rug again, and we need to ensure that anyone who has been a victim of or experienced sexual assault that they’re taken seriously when they make that claim and that their due process rights are taken seriously.”

Title IX requires universities to investigate reports of sexual misconduct and decide whether the students involved violated the university’s code of conduct.

To date, the U.S. Office for Civil Rights has conducted 435 investigations of colleges and universities across the country for possibly mishandling reports of sexual violence.

Only two Title IX investigations have been resolved in Indiana, records show.

Vincennes University has been under investigation by the Office for Civil Rights since March 20, 2014, without any resolution.

“This is a very important and sensitive issue,” said DeVos.

DeVos announced Thursday that she would be working to create new guidelines for colleges and universities on how to better protect students who are accused. She said the system established by the prior administration had "failed too many survivors and victims" of false accusations.

"One student's rights cannot be paramount to the rights of another," said DeVos.

Notre Dame and the Office for Civil Rights reached a resolution in 2011 in which Notre Dame agreed to take several steps to strengthen its sexual violence policies including to better publicize how students can file reports.

In 2011, the Obama administration started urging colleges to better investigate reports of sexual misconduct on campus.

University Title IX offices can receive a sexual misconduct report from a number of sources including police, student affairs offices, and employees who are required to report allegations of sexual misconduct.

They currently risk losing federal funding if they fail to comply with Title IX requirements.