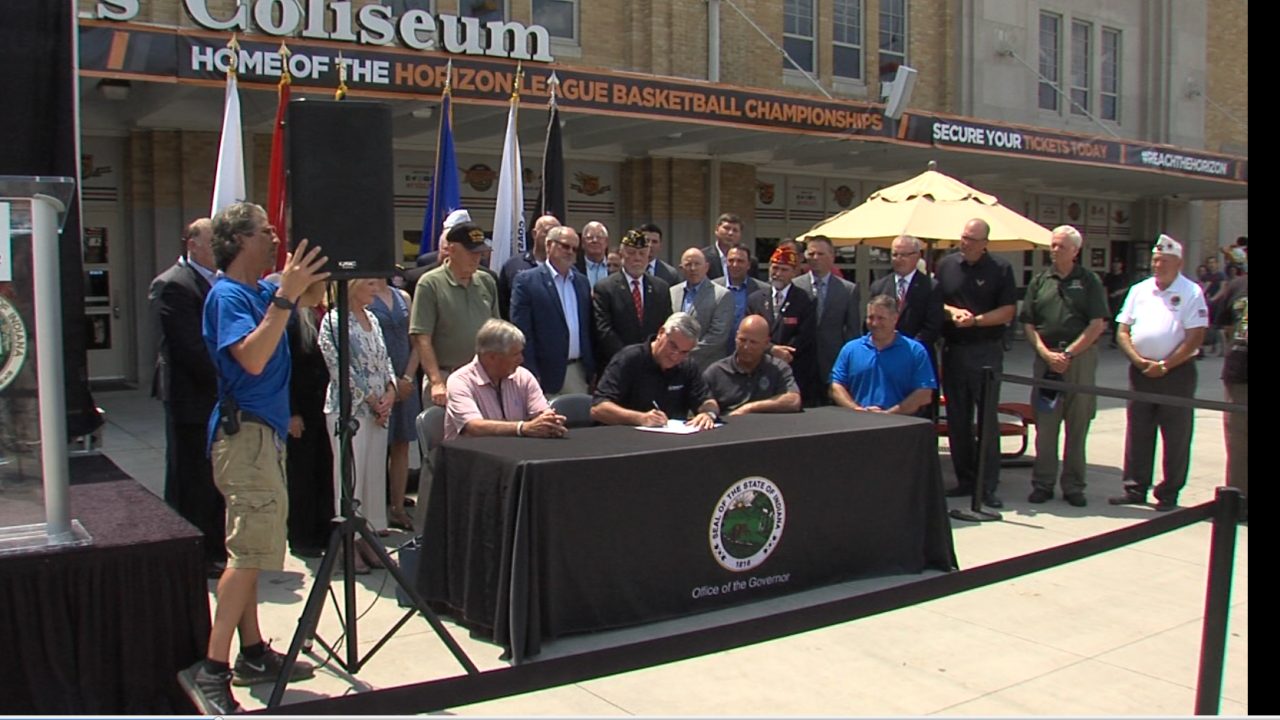 INDIANAPOLIS — A state lawmaker and veterans from several organizations are raising concerns about being left out of an Aug. 5 bill signing despite their involvement in getting the legislation passed.

On August 5, Governor Holcomb held a ceremonial signing at the Indiana State Fair for House Bill 1010, which helps military veterans and their spouses by exempting their retirement income and survivors benefits from the state income tax.

Pictured with the Governor at the bill signing include Rep. Bob Cherry, R-Greenfield, and co-sponsor Sen. Mike Crider, R-Greenfield.

Democrats Senator Lonnie Randolph, a co-sponsor of the bill, and co-author Karlee Macer, D-Indianapolis, were not included in the ceremony.

“I wanted to attend the bill signing that took place, however, I did not receive notice of the event and apparently Representative Macer was also not invited,” Randolph said. “It may have just been an oversight by the governor’s office, but it is unfortunate that the Democrats on the Bill were left off the guest list. While I would have liked to have been notified, I am glad that other legislative colleagues of the General Assembly were present.”

Lisa Wilken, chairman of the National Women Veteran Committee, AMVETS, said she did not receive an invitation despite her efforts to efforts to get the law passed.

Wilken raised concerns about the misuse of funds at the Indiana Department of Veterans’ Affairs last year , which resulted in a slew of changes within the state agency.

“I do find it very curious that I was not allowed to participate given the work I have done on this representing veterans,” Wilken said. “That coupled with the fact that my requests to meet with the Governor's office have gone ignored, does make me wonder if it has something to do with the fact that I had to file the Inspector General complaint that got the investigations and audits done at IDVA that resulted in the changes we are now seeing at IDVA. “

Wilken said veterans’ bills are always done in a bipartisan fashion in Indiana.

Brigadier General James Bauerle, a vocal advocate for reform at the Indiana Department of Veterans’ Affairs , and his group the Military Veterans Coalition of Indiana worked with lawmakers and other groups to gather support for the HB 1010.

Bauerle testified in support of HB 1010 in front of the Ways and Means committee on January 16 and was invited in the August 5 bill signing, but noted the lack of veterans at the event.

“I received an email indicating there would be limited space on the stage because of the size-- turned out that many, many people were in attendance,” Bauerle said. “Space was not an issue and many more could have and should have been invited. I was disappointed that no Democrats were present which has always been the case in the past when I was at a bill signing.”

Bauerle said the governor’s office can show its appreciate for those involved in the legislation by including them in the bill signing.

“I was particularly disappointed that more publicity did not happen so more people were in attendance,” Bauerle said. “Turnout was poor for such an important law.”

New IDVA director Dennis Wimer was present at the ceremony, but when asked about frustrations surrounding the event, Wimer said the Governor’s office planned the bill signing.

Call 6 Investigates reached out to the Governor’s office, and press secretary Rachel Hoffmeyer said the event was open to the public and no one was told they were not welcome.

“There were space constraints at the location,” Hoffmeyer said. “We had to make decisions. Our office invited the main author and the main sponsor of the bill, as well as the leadership.”

Hoffmeyer said there were some last minute changes to the space configuration at the bill signing because some of the veterans used wheelchairs.

“So, they did change the space some because of that,” said Hoffmeyer.

Hoffmeyer also disputed that the bill signing’s invitation list was political in any way, and said five Republicans and two Democrats who were coauthors or cosponsors of the legislation were not formally invited.

“I don’t think it’s fair to say that we exclude democrats,” Hoffmeyer said. “We also invited stakeholders that our office interacted with or people testified this year.”

Hoffmeyer said the office invited representatives from each of the Big Four—AMVETS, Disabled American Veterans (DAV), VFW and the American Legion.

However, some veterans feel more advocates and lawmakers could have been included.

“I feel not inviting all the veteran advocates who were involved in getting this bill done will hurt their abilities to get veterans to help them with future legislation,” Kent Morgan, life member of Disabled American Veterans, said. “I was disappointed that Democrat legislators who were involved with this bill were not in attendance - their vote helped to make HEA 1010 Bill possible. I have worked on this bill off and on for 5 years with my fellow advocates including Ms. Lisa Wilken who spend more time trying to move this bill forward.”

I’m proud to be a co-author of House Bill 1010, because I am committed to ensuring that our veterans and their families are treated with the respect they deserve for their service to our nation. This bill signing and this legislation is not about me, it’s about them. My job is to continue to work hard on finding ways to better the lives of our veterans and their families. It’s not about being a Democrat or Republican when it comes to our veterans, it’s about getting the job done and making sure they have the tools they need and the resources they deserve. That has always been, and will continue to be, my focus at the statehouse.