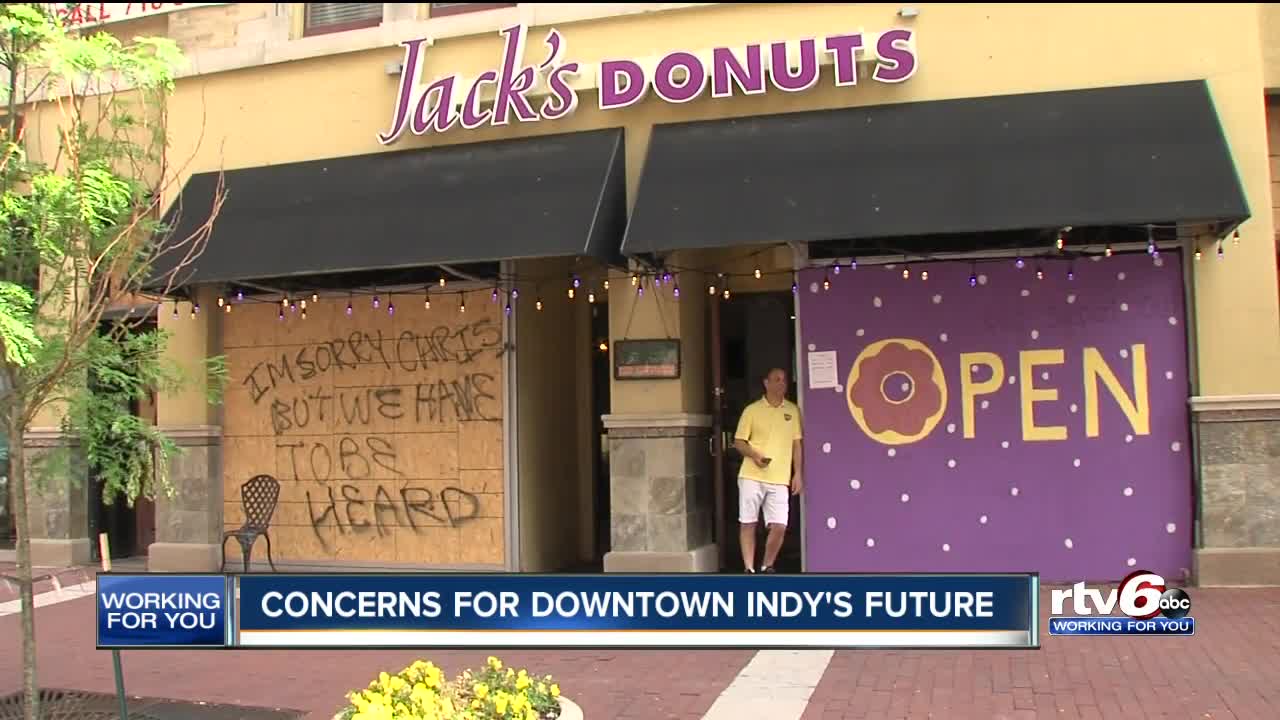 INDIANAPOLIS — It's been months since many businesses in downtown Indianapolis have been filled with customers.

Just as coronavirus restrictions were eased, some restaurants and stores were boarding up windows after protests turned violent. After months of disruptions, one business owner said downtown Indy needs help or it may never be the same.

In downtown Indianapolis this is the new normal — board up businesses trying to recover from the COVID-19 pandemic and a weekend of riots in late May that left windows broken and businesses looted with fewer customers.

Karnavas had a front row seat watching downtown Indy go from lively to ghost town. Karnavas owns Jack's Donuts on Market Street. his donut shop was the first business to be damaged when peaceful protests turned into violent riots on May 29. He said business downtown is slowly increasing but believes the economic damage is already done.

"We've lost a lot of business downtown," Karnavas said. "I think when this shakes down we're gonna end up with a lot of empty real estate."

Jack's Donuts is one of the businesses that has reopened, but with wood panels covering the windows. One panel greets Karnavas daily bearing a message from protesters apologizing for the damage to his shop but explaining that they had to be heard.

Karnavas said many business owners plan to keep the boards up until city leaders address the concerns of protesters. He said business owners would like to have a word, too.

"I mean we haven't heard from the mayor. The mayor has been in hiding since this all happened," Karnavas said. "His job is to make sure that the city is a safe, secure place. he should be out meeting with the business owners of the community and he's failed to do that. We've heard nothing from him since this has happened."

Karnavas said in this time of uncertainty more leadership is needed to create a new balance of bringing customers back to downtown while also making sure protesters are being heard as well.

WRTV reached out to Mayor Joe Hogsett's office for a response. This is what the mayor's office had to say:

The Mayor’s Office has been in continued contact with downtown establishments and associations throughout the past several months. We are working to maintain lines of communication with businesses on reopening from both the pandemic and the protests while also supporting advocacy organizations, including Downtown Indy, to support businesses during this difficult time.