In 1918, Indianapolis required masks during the fight against 'The Great Influenza' 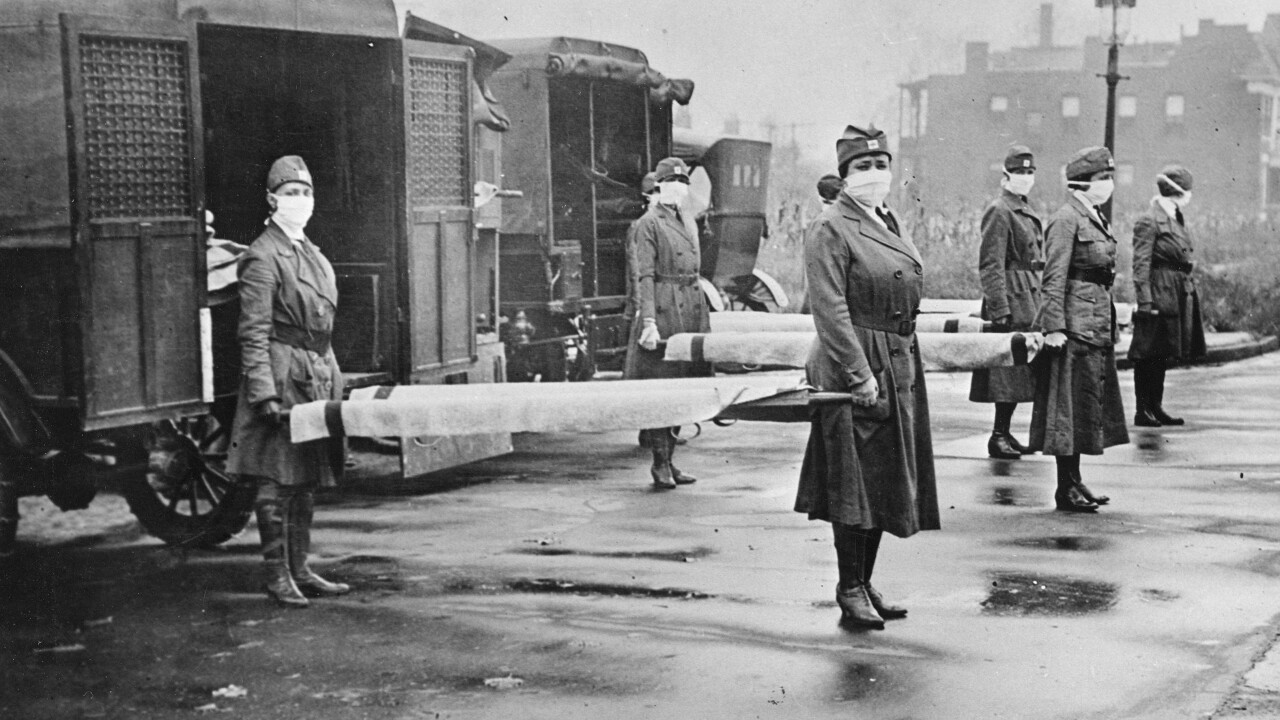 Library of Congress/AP
In this October 1918 photo made available by the Library of Congress, St. Louis Red Cross Motor Corps personnel wear masks as they hold stretchers next to ambulances in preparation for victims of the influenza epidemic. A century after one of history’s most catastrophic disease outbreaks, scientists are rethinking how to guard against another super-flu like the 1918 influenza that slaughtered tens of millions as it swept the globe in mere months. (Library of Congress via AP)

INDIANAPOLIS — Dr. Herman G. Morgan, the 33-year-old secretary of the Indianapolis Board of Health, presented the situation in simple terms.

In November 1918, Indianapolis and the rest of the world were in the grips of the worst influenza pandemic in history. Less than two months had passed since the city's newspapers reported the first cases among soldiers stationed at the Indiana School for the Deaf and Fort Benjamin Harrison.

Morgan's Board of Health issued sweeping orders in early October 1918, similar to those the city imposed in March and April 2020 in the fight against the COVID-19 pandemic.

By November, Indianapolis began reopening and its citizens gathered in celebration of victory in World War I, leading to another rise in cases, according to Bill Beck, a current member of the Marion County Historical Society's board of directors.

"Flu cases had spiked late the week before in the wake of the Armistice celebrations on Monday, Nov. 11, and the Board of Health reacted by trying to get ahead of the curve," Beck said.

Morgan determined it was time for citizens to wear masks in public or risk the city shutting down for a second time.

"The board of health has placed on the individual and, to a larger extent, his employer, the matter decided of whether business shall continue in Indianapolis," Morgan said in the Indianapolis Star on Nov. 20, two days after the mask requirement was announced. "If there is a tendency on the part of the public to disregard the health regulation, the only resort is to close up all business houses and public gathering places."

The H1N1 flu, also known as the Spanish Flu and La Grippe, was both rapid and violent.

Fueled by soldiers moving around the globe at the end of World War I, the Centers for Disease Control and Prevention estimates the flu infected one-third of the world's population and killed at least 50 million people worldwide, including 675,000 Americans.

The author John H. Barry wrote in his book "The Great Influenza" the first confirmed cases appeared on March 4, 1918, at Fort Riley, Kansas. It finally subsided in the summer of 1919 after arriving in three waves. The second wave in the fall of 1918 was the most severe.

In his book, Barry described the swiftness with which the virus struck its victims and the horrifying symptoms many experienced.

"Symptoms were terrifying," Barry wrote. "Blood poured from the noses, ears, eye sockets; some victims lay in agony; delirium took others away while living."

The Indianapolis Star reported on Nov. 24 that 3,266 Hoosiers died statewide from the flu in October, and 3,020 children became orphans. The illness struck the youngest and strongest adults the hardest.

"More than 53 percent of the 3,266 persons who died of influenza-pneumonia in Indiana during October were between the ages of 20 and 40 years," the Star reported.

Beck said his grandfather was a mortician in Indianapolis during the pandemic.

“My dad remembered never seeing his father that whole fall because he was so busy burying people," Beck said. “This thing was so lethal that people would basically come down with it one morning and be dead the next morning."

'But we gotta do it'

With cases rising, on Nov. 18, the Indianapolis Board of Health announced an order requiring face masks, along with the closure of all schools.

In that evening's edition of The Indianapolis News, Morgan said masks "should be made of cheese cloth, surgeon's gauze or other porous material." The News reported the board considered re-closing the city, but first wanted to attempt the mask order.

"The board said the order requiring the wearing of masks was adopted in the hope that thereby the necessity for a renewal of the general closing order would be avoided," the News reported. "It is up to the business men and the managers of business houses, theaters, poolrooms, barber shops and all other public places to see to it that persons without masks are barred. Places which violate this ruling will be closed."

In a Nov. 20 piece headlined, "All Dressed Up Like a Horse, With a Goshawful Nosebag--but We Gotta Do It," Indianapolis Star columnist Mary E. Bostwick described the scene in offices and streets as people acclimated themselves to wearing face masks.

"On the street, the masks were seen yesterday at intervals, although not frequently enough to keep the unmasked citizens from snickering at their brethren who were going around with their faces all under cover," Bostwick wrote. "But the mask wearers did not care. No one could tell who they were anyway."

While she found some humor and ridiculousness in the situation, in the end, Bostwick concluded the mask order was necessary.

"Whether we want to or not, we positively must not go anyplace indoors with our faces undressed," she wrote. "And if we get to chortling raucously at somebody so adorned, remember we look just as funny ourselves."

Still, same as today, there were those who fought against the mask order.

While the penalty for violating Marion County's order that is scheduled to go into effect Thursday is a fine of up to $1,000, the city treated "mask slackers" harshly in 1918. On Nov. 22, The Indianapolis Star reported three men were arrested in a hotel lobby after they refused to wear masks.

"They were released at the City Prison on their own recognizance," according to the Star.

As objections to wearing masks continued, Morgan spoke about the importance of following the order. In the Star on Nov. 24, he pleaded with citizens to wear masks in order to prevent the city from being shut down for a second time.

He emphasized the wearing of masks "is not a pet whim of any member of the health department" and that "the cooperation of the majority of people is absolutely necessary to make any preventative measure a success."

The influenza situation in Indianapolis is not showing any improvement either in number of cases reported or the death rate. The health department recently adopted a resolution requiring that all citizens wear a gauze mask everywhere except on the street and in the home.

This was not for the purpose of causing an inconvenience to the public, as some conscientious objectors have stated, but to prevent infection from being transferred from one individual to another. The wearing of gauze masks is not a pet whim of any member of the health department. This method of preventing cross infection has been successfully used in a number of cities and has been used by surgeons for years to prevent droplet infection from reaching the field of operation. The mask has been adopted by military hospitals in both the general and infectious wards. Medical literature is full of data which proves conclusively the efficiency of this method.

When a community is confronted with a serious epidemic, the cooperation of the majority of the people is absolutely necessary to make any preventative measure a success. This is not a time for destructive criticism, petty jealousies or all-time 'knockers,' but an occasion for every individual to aid in the enforcement of the preventative measure to end that disease and death may be reduced to a minimum.

A turn for the better

At the beginning of the following week, however, Morgan was pleased with the results of the city's mask campaign. He urged caution, but with infection rates decreasing, on Nov. 25, the Board of Health rescinded the city's mask order. Schools remained closed until Dec. 2.

"This measure enabled the board to bridge over a very alarming influenza situation and to reduce the chances of cross-infection," Morgan said in The Indianapolis News on Nov. 25.

Morgan, who led the Indianapolis Board of Health for 33 years until his death in 1946, added that the wearing of masks allowed the city to continue business and retain at least a semblance of normalcy.

"It prevented a large number of persons from being deprived of employment, a situation that would have developed if a closing ban on all forms of business had been established," he said. "While the mask recommendation was met with some opposition, the spirit of cooperation in the beginning was all that could have been expected and enabled the board to cut short the present epidemic."

By the time flu pandemic passed, Indianapolis had a rate of 290 deaths per 100,000 people, one of the lowest among U.S. cities, according to the "Influenza Encyclopedia," produced by the University of Michigan Center for the History of Medicine and Michigan Publishing.

Bill Beck, of the Marion County Historical Society, said he and Dr. William McNiece, the Historical Society's president, estimate 950 people in Indianapolis died from the flu in October, November and December 1918.

“I get the impression that both the state board of health and the county board of public health were very proactive," Beck said.

Being proactive will be a necessity in the days, weeks and months ahead in the current battle against COVID-19, which has killed at least 132,000 Americans, including more than 2,500 Hoosiers.

"This pandemic has not gone away," current Indianapolis Mayor Joe Hogsett said last week while announcing a face mask mandate. "And across the country, we are seeing examples of what can happen when a city lets its guard down."

If there is a singular lesson we can apply from Morgan's campaign against the influenza pandemic of 1918 to the coronavirus pandemic of 2020, it is that the path toward defeating a virus leads only through cooperation and collective will.