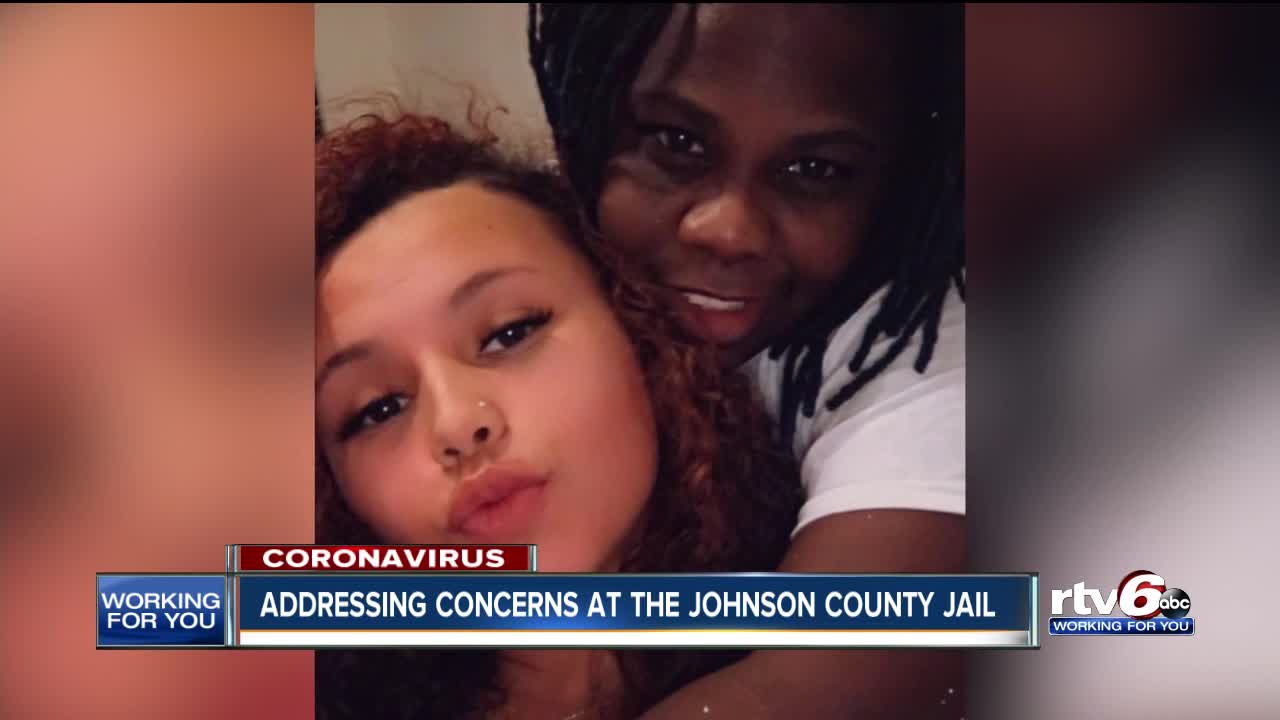 After the Johnson County Sheriff Duane Burgess announced almost half of the people they tested at their jail came back positive for COVID-19, many people have reached out to WRTV concerned about their loved ones and frustrated with not getting answers. All the positive cases has forced the jail to do a two week quarantine.

JOHNSON COUNTY — After the Johnson County Sheriff Duane Burgess announced almost half of the people they tested at their jail came back positive for COVID-19, many people have reached out to WRTV concerned about their loved ones and frustrated with not getting answers.

All the positive cases has forced the jail to do a two week quarantine.

Teasia Evans is in the jail and her partner is afraid she might get the virus.

Johnson County Sheriff Duane Burgess says he and his staff see the humanity in people who end up in the jail.

"People that are in jail also have families outside of here," Burgess said. "Things on the outside affect them in here, so, we try to do the best we can."

Burgess says he immediately began looking into concerns WRTV sent about Evans, who has been in the jail for the last week.

Evans' loved ones say she is sharing a cell with three other women, one who may be sick.

"You might have issues being in a cell with other people, but I'm trying to look out for your safety as well," Burgess said. "Every day we're moving people or trying to move them around to make it easier on them."

Zarian Conrad, Evans' partner, says it's been hard hearing about the conditions inside, like living in a crowded and small cell and having limited opportunities to shower.

"I'm not saying it's supposed to be luxurious in jail, but I'm saying it should be standard care," Conrad said. "Everything needs to be cleaned up, it shouldn't be a privilege for a shower. It should be mandatory."

We asked Sheriff Burgess about the claims Conrad made. This is how he responded to those claims.

“We’re all living with different types of restrictions. We try to address those the best we can," Burgess said. “On the 26th, that will be 14 days from when we had everybody tested, and that's a date that I can't wait to get here. Then, we can kind of get back to some normal operations."

Normal operations could mean lifting some of the quarantine restrictions for inmates like Evans.

Burgess is encouraging anyone concerned about their loved ones in the jail to call and ask questions. He says he is making decisions based on guidance from his medical staff.

Conrad says they've found a lawyer and are working on getting Evans out of jail.

Burgess also sent the following statement to WRTV on his office’s response to the pandemic:

Since we were first made aware of the COVID-19 pandemic, we have worked diligently to keep both the inmates and our employees as safe as possible. We immediately began instituting recommendations from the federal and state health officials about how to minimize the impact of a virus that has affected every person on the planet in some way. The strictly controlled environment of a jail makes the already complex situation of a pandemic even more difficult.

We have taken many measures to minimize the inevitable progression of the virus in our jail, including: screening all inmates when they enter our facility using the same questions that are being asked at every doctor's office and medical facility; immediately isolating anyone that has any symptoms consistent with COVID19 or other viral infection; issuing surgical masks to all inmates and routinely exchanging them out; mandating that all personnel within the jail wear a mask; increased sanitation of all areas of the jail using recommended anti-microbe cleaning chemicals and methods; quickly getting anyone exhibiting symptoms or even "not feeling right" to be seen by our medical staff; and keeping known COVID-19 positive inmates separate from those that tested negative. In addition, the state health department has provided education to the inmates about the virus and keeping healthy.

We have been working within the very limited space that our jail provides. Our jail was overcrowded prior to this pandemic, but we have worked with local judicial officials to release non-violent offenders and minimize the numbers of new inmates coming to our facility. Our staff has worked tirelessly to overcome the difficult logistics of moving around nearly 300 inmates in an overcrowded facility, while maintaining the safest and healthiest environment we can.

I have maintained complete transparency with the situation at our jail. While other facilities have not reported any COVID positive inmates, that is simply because they haven't tested them. There is no place on earth that is completely removed from this virus and it has shown that it can and will penetrate everywhere. We made the decision to test our inmates at the suggestion of our medical staff and immediately reported the results to health officials and the public. It is important to note that, while the number of COVID-19 positive inmates is higher than we would have guessed, they have all been completely asymptomatic except for 4 individuals. This is consistent with the US population in general.

We will continue to make educated decisions with our medical partners and local and state officials. Every decision that is made is done with the safety of our inmates and staff in mind. This may sometimes override comfort and convenience, but that is what everyone in the world has had to do while combating this pandemic.